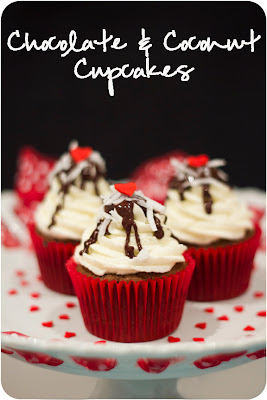 Last month I was contacted by a new baking magazine to see if I wanted to submit one of my cupcakes to be part of their bloggers gallery.

I was all ready to think up my most inventive and original Christmas cupcake when I was told that the issue I would be published in was actually going to be a Valentine's issue!! So right in the middle of all my Christmas baking, I whipped up these special Valentine's cupcakes!

If you're visiting my blog for the first time or if you found me through the magazine then welcome! and if you liked the look of my chocolate and coconut cupcakes then you will find the recipe below!

This is the first time I have baked from my Magnolia recipe book and I wasn't sure what to expect but I am pleased to tell you that these cupcakes were some of the fluffiest and most delicious I have baked in a while!

Preheat the oven to 180 degrees c.
Line the baking pan with cupcakes cases.

Separate the eggs when cold and then allow them to come to room temp before proceeding with the recipe.
Melt the chocolate in a double boiler or in 30 minute bursts in the microwave.  Leave to cool for 10 minutes.
In a small bowl, sift together the flour, baking powder, bicarbonate of soda and salt.  Set aside.
In a freestanding mixer on medium speed, cream the butter until smooth.  Add the sugar and beat for 3 minutes until fluffy.
In a separate bowl beat the egg yolks for 2 minutes until thick.  Add them to the mix and beat well.  Add the chocolate, mixing until incorporated.
Add the dry ingredients in three parts, alternating with the coconut milk and vanilla.  Scrape down with a spatula in between additions making sure everything is well blended.
In a separate bowl, beat the egg whites on high speed until soft peaks form.  Gently fold them into the batter using a wooden spoon.  Stir in the desiccated coconut.
Fill cupcake cases 2/3 full and bake for 15-20 minutes.
Cool in pans for 5 minutes and then transfer to a wire rack.

For the frosting:
Adapted from The Hummingbird Bakery Cookbook

Beat the icing sugar and butter together in a freestanding mixer on medium speed until the mixture comes together.
Add coconut milk and beat until it has been incorporated.
Turn up to high speed and beat for 5 minutes until the frosting is light and fluffy

Melt chocolate in microwave or in a double boiler.  Leave to cool. Drizzle over the top of the frosting and sprinkle with shredded coconut.  Finish with a large heart sprinkle. 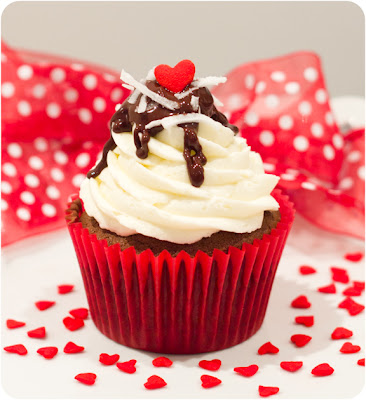 I was very excited to get my copy of the Love Baking Cupcakes & Sweet Treats magazine: 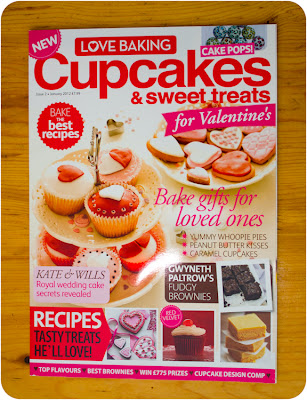 It is sold in WHSmith, Hobbycraft and most supermarkets and is in shops now.  If you turn to page 8 you can see a picture of my cupcakes, along with lots of other yummy looking cupcakes from The Baking Addict, I heart cupcakes, Apple and Spice, American Cupcake in London, The Nom Bakery, American Chop Suey and The Caked Crusader: 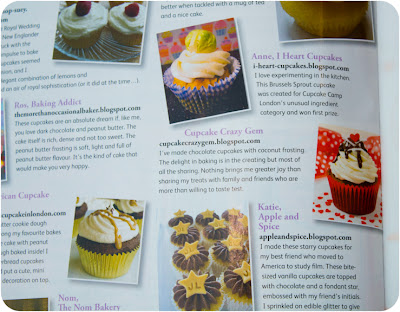 and not only that but with each issue of the magazine you always get tons of good freebies.  With this issue I got a free cupcake box, an individual heart cookie box, heart cupcake wrappers, and heart cookie cutters - all will come in handy when my official Valentine's baking begins! 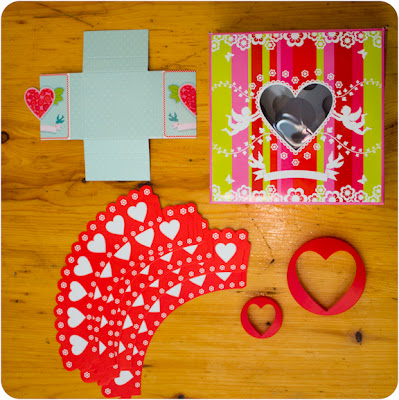 Not only that, but the magazine comes packed with tons of yummy recipes.  There are so many I want to try, and my favourite part of all is the awesome tab stickers you get! So as soon as I saw this coconut brownie recipe (being the coconut lover I am) I knew I wanted to bake it, and so I could peel off this little tab sticker and bookmark it for later! How cool! 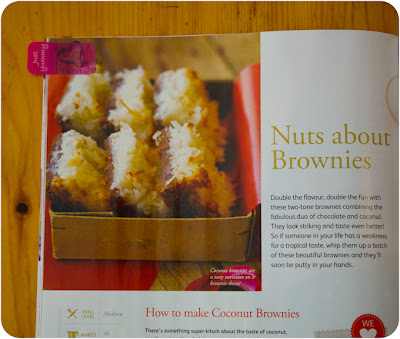 They also do a good feature with each issue where they showcase some of the UK's best cupcakeries.  I was interested to see in this issue that I had reviewed 3 of the same cupcakeries they had here on my blog.  You can read about Dixie's Cupcakery in St.Albans, Sweet Tooth Cupcakery in Manchester and one of my all time favourites - Queenie's in Shropshire. 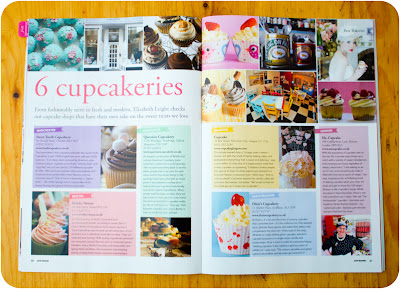 So what are you waiting for - if you're an avid baker or cupcake crazy like myself then pick up a copy, you won't be disappointed!
Posted by Cupcake Crazy Gem at 17:25