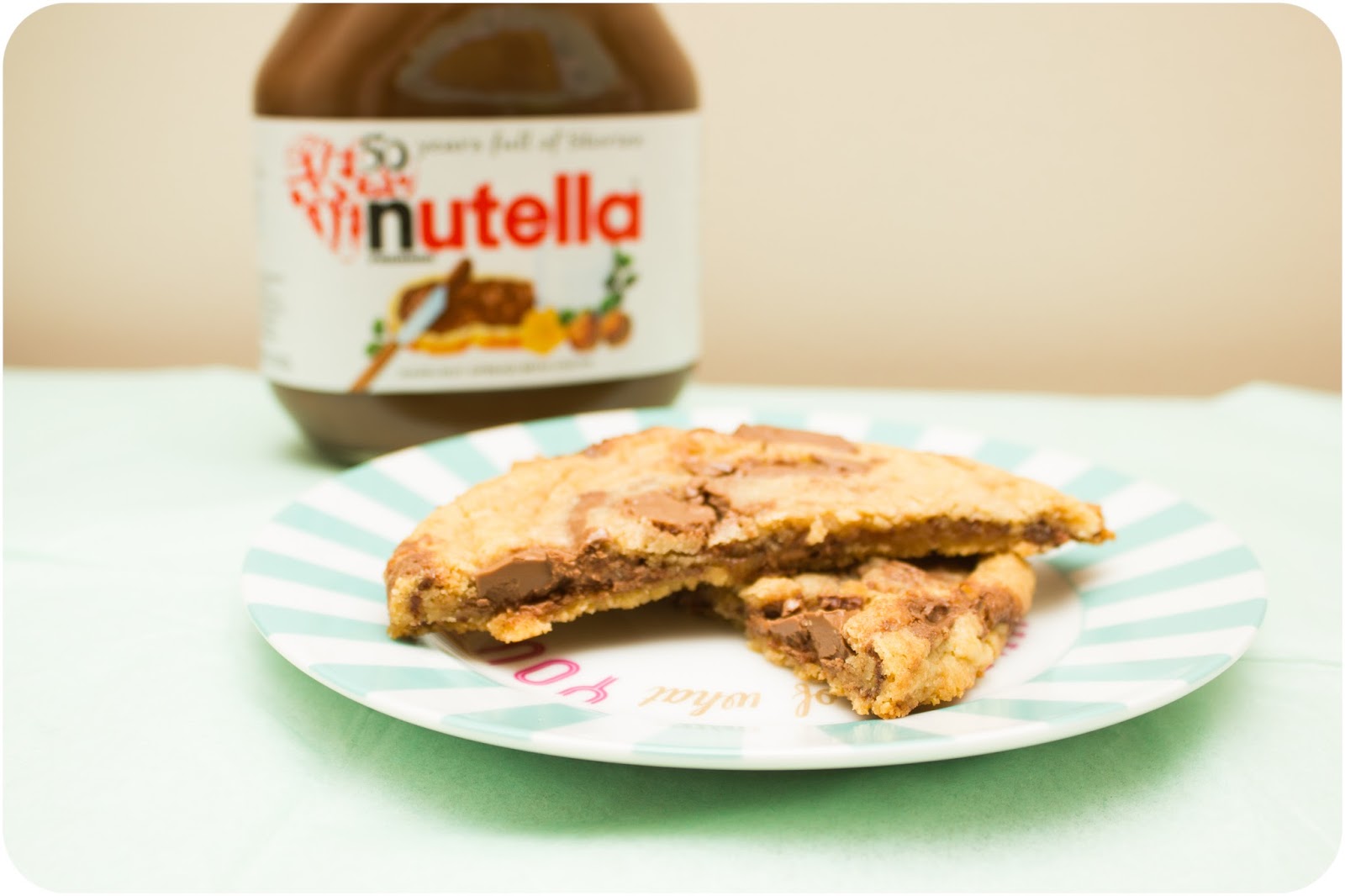 Lately there's been a lot of cookie making going on around here! My husband LOVES cookies, and gets very excited whenever I bake any!

I was also trying to use up that ginormous jar of Nutella as I mentioned before so a stuffed Nutella cookie seemed like as good an idea as any.  When I went to my Nutella pinterest board in search of inspiration and I found Tracey's brown butter Nutella stuffed choc chip cookies I knew I needed to look no further! 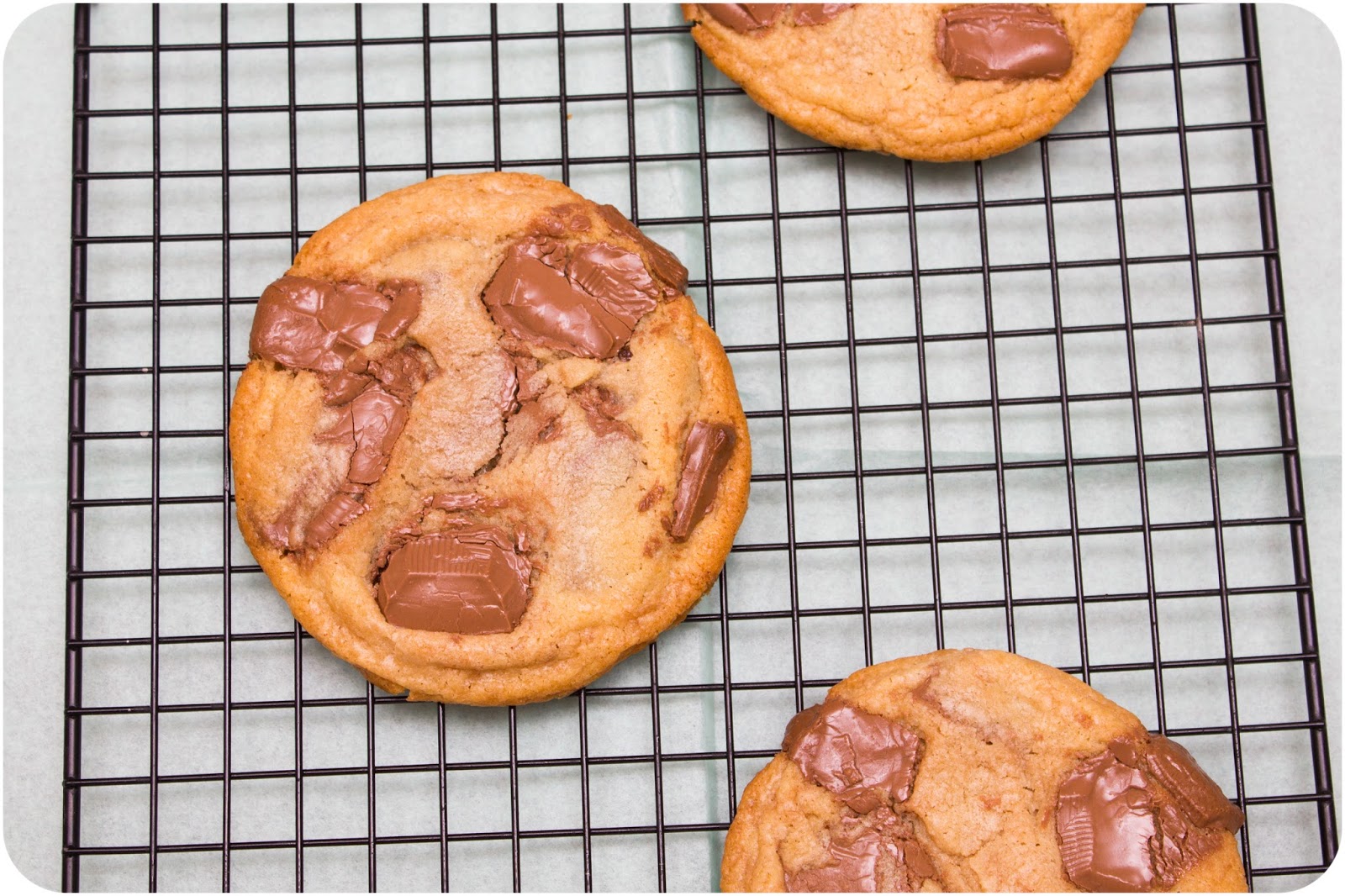 I made up the cookie dough and kept it frozen and baked four cookies each night over the period of a week.  This was for two reasons - one, because I knew they were going to be so downright delicious that if I'd baked up all the cookies at once I would have had a hard time restraining myself to eating just a few! and two - because it gave me the opportunity to try out different methods to see which was best for stuffing the Nutella in the cookie.

Most recipes I came across seemed to use their Nutella frozen in the cookies.  This seemed like a logical idea to me - bake it frozen and in the oven it will turn into a gooey melty pool of Nutella that we know and love.  So I put my Nutella in a piping bag and piped lovely little round discs of Nutella and froze them, ready to be stuffed into the cookies.  I popped a frozen disc in the middle and baked it up.  I was SO excited to get my cookies out the oven - but when I did there was no melty pool of Nutella oozing out the middle! the disc of Nutella was still pretty solid! and more like a giant chocolate chip - that really wasn't what I was after! 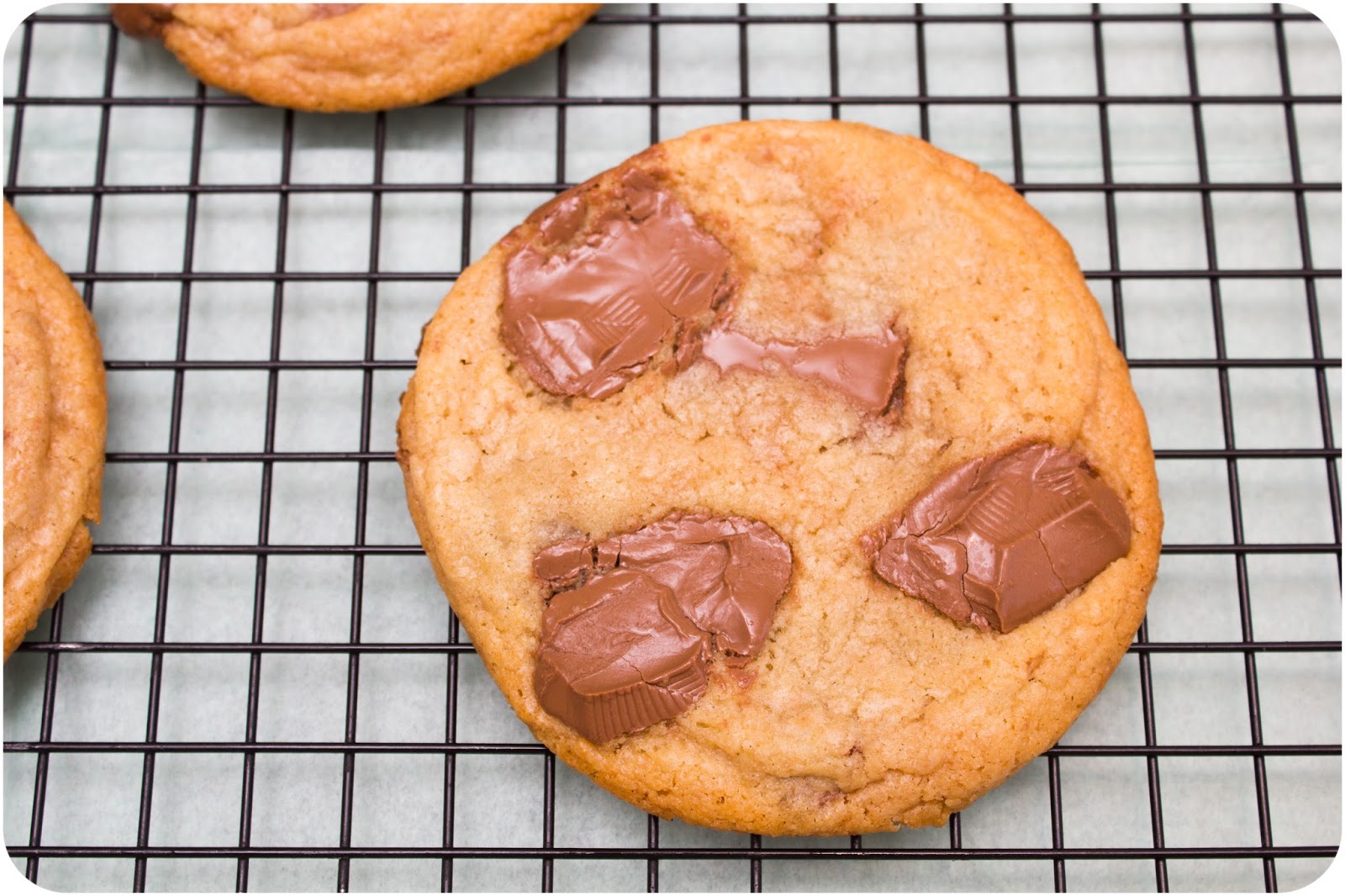 So the next night, I got them out the freezer slightly earlier in the process, and thought that would help but again it didn't really melt the way I wanted it too.  Finally on the last night, I forgot about my frozen discs altogether! I dolloped a little teaspoon of room temperature Nutella in the middle of my cookie ball and squeezed the cookie dough around the Nutella, as I squeezed it together all kinds of Nutella squirted out and I had to roll it back into the cookie which left the cookie perfectly streaked - now this was my kind of Nutella cookie! Once it came out the oven, the Nutella was perfectly gooey and delicious in the centre of the cookie but also there were lovely streaks throughout the cookie.

Perfection! So if you were to bake these in your kitchen, that is the method I would recommend using! I have a feeling the pictures I took for you were on day 3 of the method testing, day 5's results were so delicious that they did not hang around to be photographed! So if you want to see that big gooey pool of Nutella oozing out a cookie...you're just going to have to bake some up for yourself! 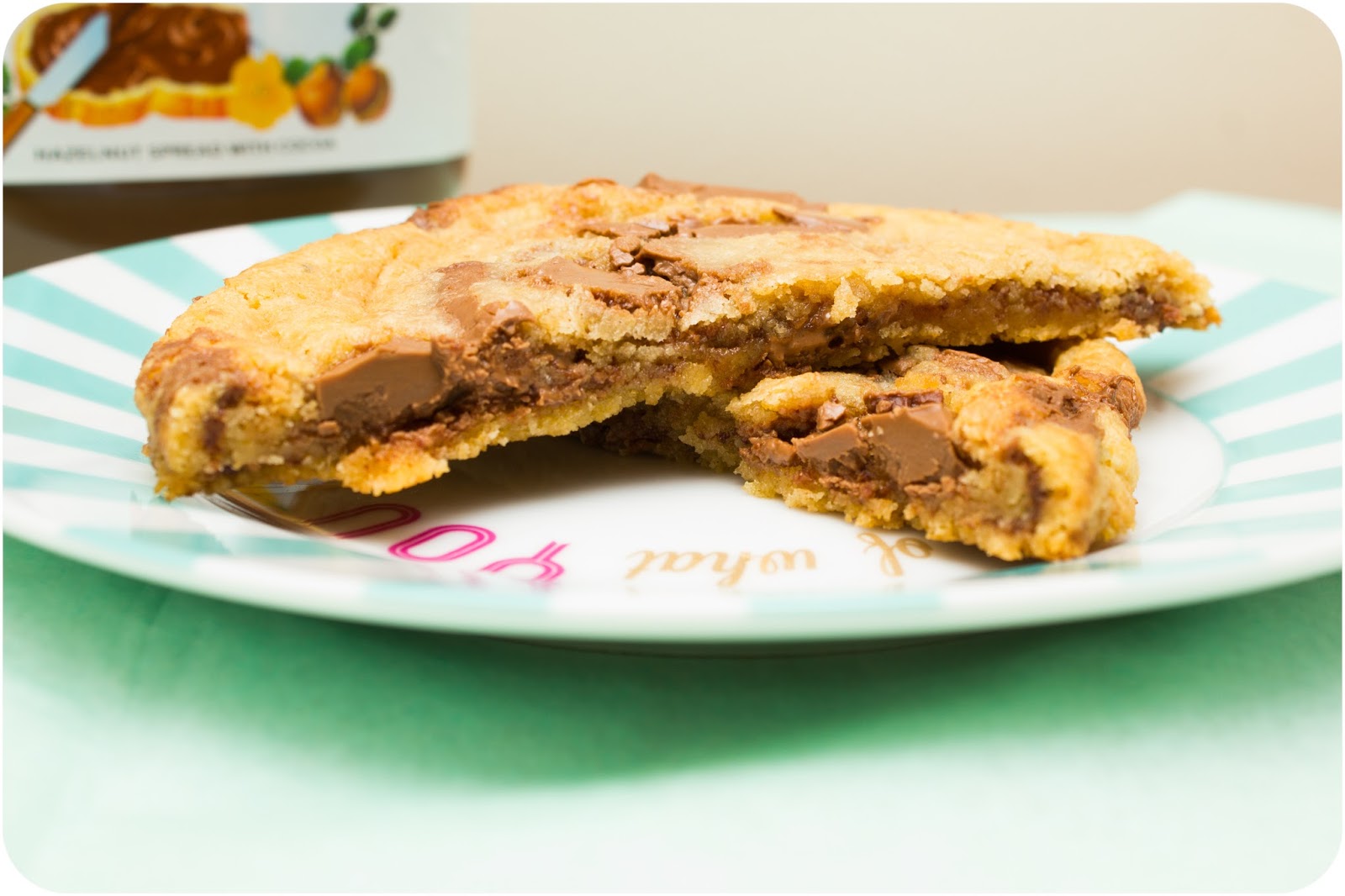 Slice up the butter thinly into chunks, and add it to a frying pan over medium heat and let it start melting.  Continue cooking, swirling the pan occasionally, until the butter becomes golden brown and smells nutty (be patient and watch carefully - it can go from brown to burnt quickly).  Pour the butter into the bowl of a stand mixer fitted with the paddle attachment.  Let it cool.

Whisk the flour and sea salt together in a medium bowl.  Add both the sugars to the bowl of the mixer along with the cooled brown butter.  Beat on medium speed until blended.  Add the egg and egg yolk, mixing until incorporated and scraping down the sides of the bowl as needed.

Mix in the vanilla, and milk.  With the mixer on low, add the flour and salt mix in two additions, beating until just incorporated.  Add the chocolate chunks (but reserve some for adding to the top of the cookies - I like to put 3 full chunks on top of each cookie before it is baked) and grated chocolate and mix until evenly distributed. Cover the bowl with clingfilm and refrigerate the dough for 30 minutes.

Meanwhile, preheat the oven to 180 degrees C.  Line your baking trays with parchment paper or a silpat mat.

Using a small cookie scoop, about 2 tbsp, portion the dough into balls.  Working with one ball at a time, use your thumb to create a well in the centre of the ball.  Add a dollop of room temperature Nutella, straight from the jar, into the well and then seal the cookie dough around it so it's completely enclosed.  Repeat with all of the dough and Nutella, placing the balls of dough 2 inches apart.

Bake the cookies for 12-14 minutes or until the edges are golden brown and set.  Let cool for 10 minutes and then transfer the cookies to wire racks to cool completely.

These cookies are best warm from the oven, which is why it's good to freeze the dough and just bake a few as and when you want them.  Alternatively, microwave for 15-20 seconds before eating! Sometimes I feel like I have a disorder...that is going to prevent me from ever baking anything without nutella again!! Like my hand literally has to reach for the jar of Nutella anytime I whip something up! I'm sorry to some degree, variety is the spice of life and all that, but in my opinion Nutella adds a new dimension of tastiness to every bake so for that I'm not sorry!

To be fair, I also had one of those monster size bigger than your head jars of Nutella from Costco that I needed to use up before we moved...so now we have, and the jar is empty, and so with the exception of my next blog post there will be a Nutella lull for a while and regular varied blogging will resume :) 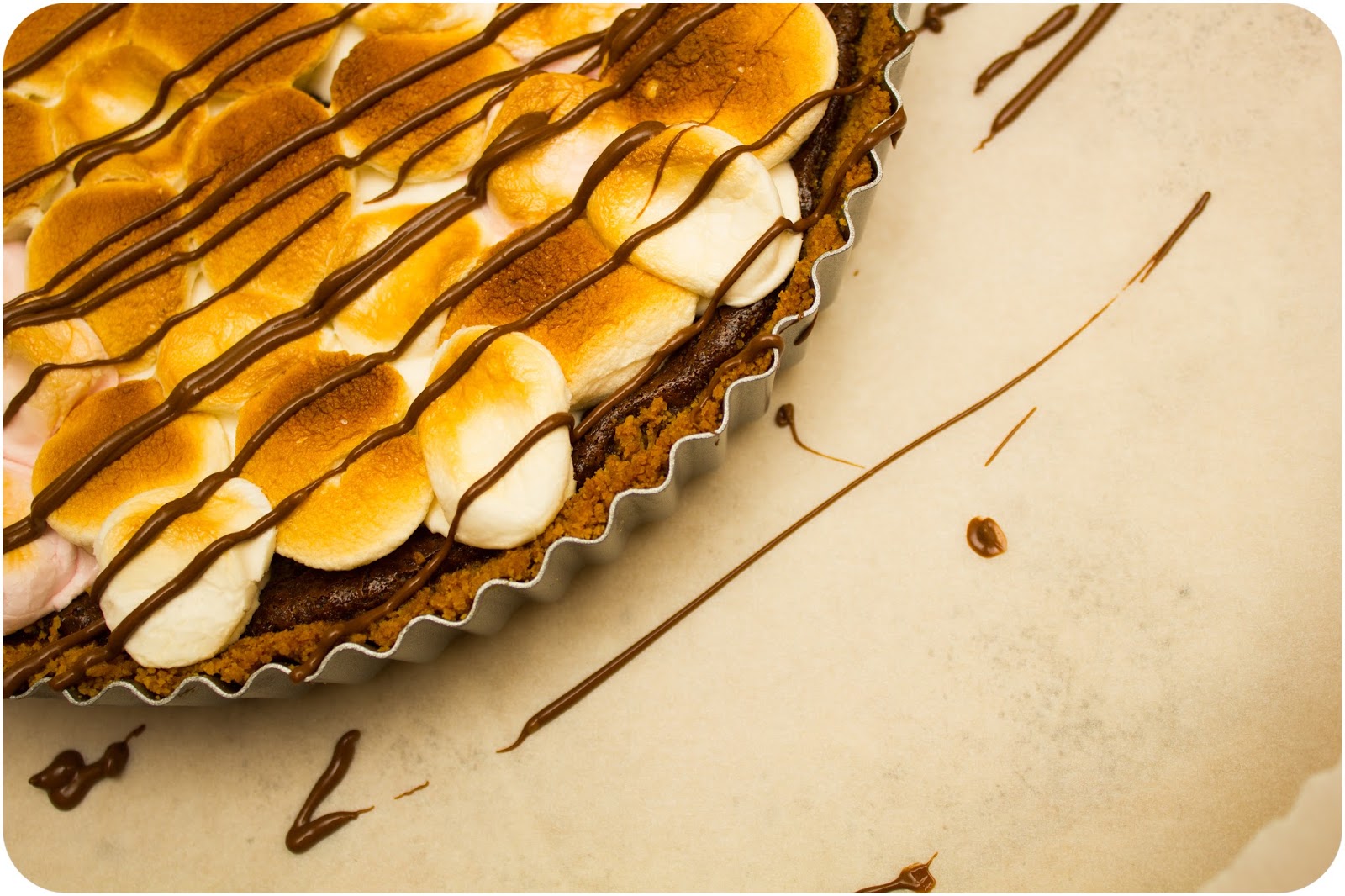 Have I told you before there are 27,345 reasons why I need to move to North America? Well...there are! and S'MORES are definitely in the top 10 of all the reasons!  So when our good friends invited us over for a farewell meal I knew I wanted to bake something s'more-licious, since they are marshmallow lovers, and I came across this pie! and as I was whipping it up I thought 'hey I know I'll sub out half the chocolate and add in Nutella instead'...

so the Nutella S'mores Fudge Pie was born!

and after toasting up the marshmallows under the grill, of course there was really only one thing to finish it off with - and that was more Nutella! because nothing makes my heart happy like drizzled Nutella...and sitting around a fire making s'mores - so I felt like this sort of combined the two!

Bake this up today...it will cure your North American blues for about a day until you wake up and realise you need to live somewhere where root beer, graham crackers, and marshmallows as big as your fist are freely available at your local supermarket!! 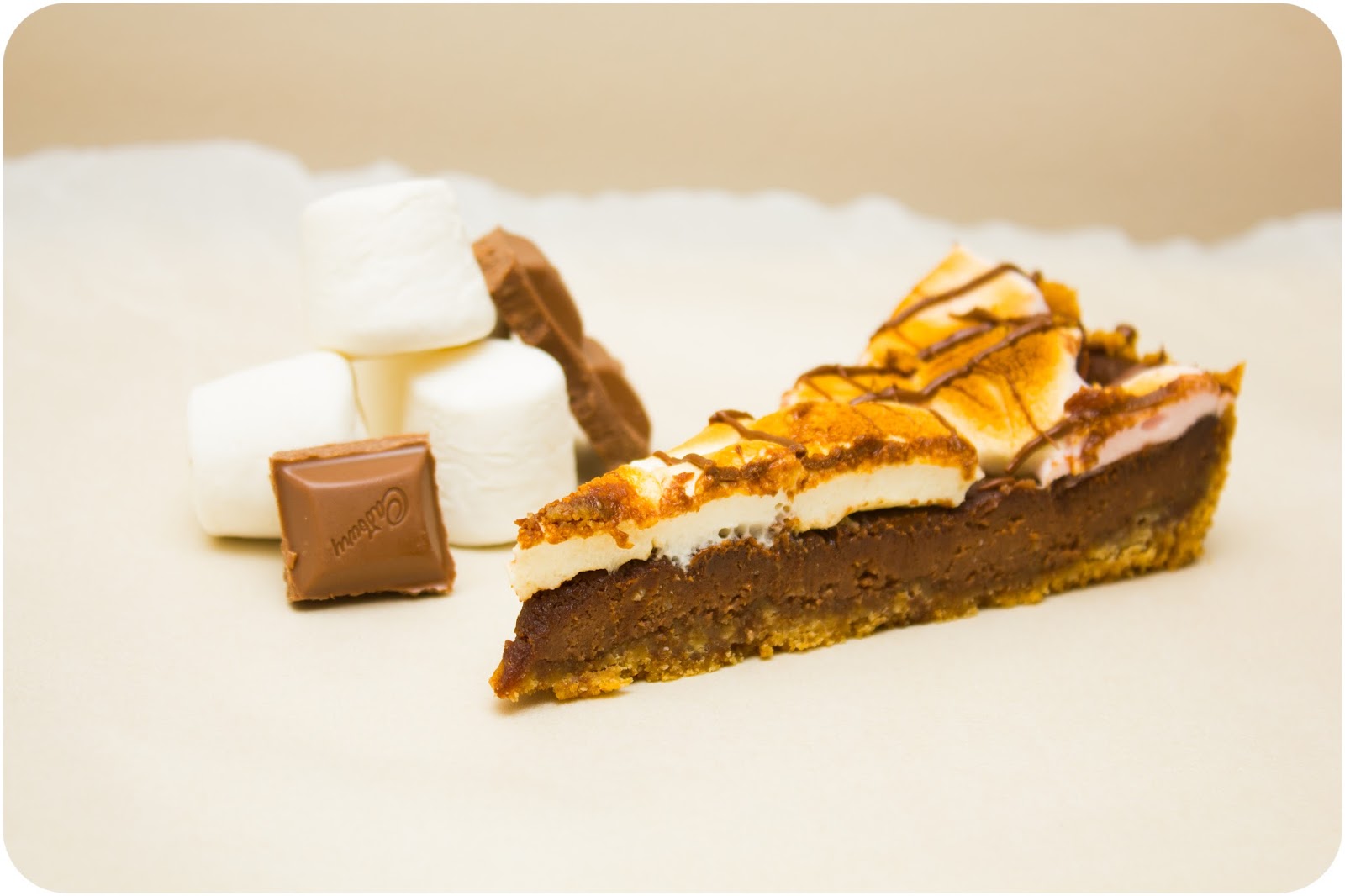 22 graham cracker squares (digestives/hobnobs can be subbed if you are in the UK)
165g unsalted butter, melted

In a medium mixing bowl, mix together the graham cracker crumbs and melted butter until evenly coated.  Press mixture into a 10" tart dish (you may have some crumb mixture left over).  Bake for 8-10 minutes or until just starting to brown.

In a medium saucepan, whisk together the cream and milk.  Warm over medium-low heat.  Add in both chocolates and Nutella and stir until mixture has melted and is smooth.  Slowly add the whisked eggs and mix until smooth.

Using kitchen scissors or a sharp knife cut the marshmallows in half.  Place halves in concentric circles until you completely cover the top of the pie.  (I left gaps in mine because I remembered how when you bake marshmallows they spread alot...however because you are only grilling them they don't expand at all so I had to go back and add in more marshmallows! so make sure the whole thing is covered first time around!)  Place the pie under the grill, watch it closely because the marshmallows toast quickly between 1-4 minutes, and they will turn to charcoal in about 2 seconds if you aren't watching them like a hawk!

Melt 3 tbsp Nutella in a bowl in the microwave for approximately 45 seconds.  Fill a piping bag, and drizzle across the top of the pie first in one direction and then in the opposite direction.

Chill the pie in the fridge to set for at least 2-3 hours.

Whilst the pie can be eaten cold, it's best and at it's most s'more like when slightly warmed.  Heat the slices in the microwave, one at a time, for 20-40 seconds until the marshmallow is a warm gooey mess and the Nutella has melted into it.