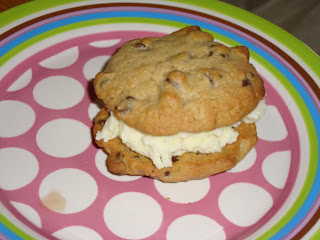 So we were going to snuggle down and watch Serendipity when Byron decided we needed to have some cookies to eat halfway through! I haven't made cookies for aaaaages..usually its cake or brownies with us so I remembered the nestle toll house chips my American friend Annie had given me and decided some american cookies would go down well. We whipped them up together and I then decided to sandwich mine with some ice cream which was pretty tasty. The photo evidence is above! Another reason to try and convince By Cali is where we need to be...'me: if we lived in America we could have toll house cookies all the time'!!! we also went to the beach yesterday to make the most of the amazing weather, we went to bournemouth first and then to Sandbanks and it was just lovely lying in the sun and playing in the waves..'me: if we lived in cali we could do this every day' hopefully I'm getting through! We topped off our afternoon of beach fun with some cream tea...a scone with jam and cream and a lemon drizzle cake which we shared! 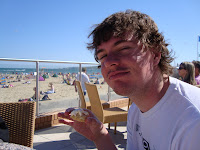 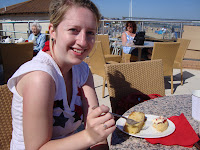 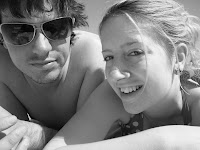 Posted by Cupcake Crazy Gem at 19:37 No comments:

Moms 60th..and my 1st attempt at a triple layer cake! 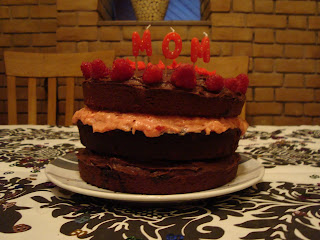 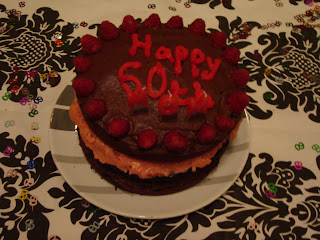 So I wanted to do something special..and was thinking about cupcakes as my mom loves them - infact I bought her as a present a place on a cupcake making course in macclesfield which I'll be attending with her and my sister Mara and we're sooo excited! it should be great! After much searching I only found 4 courses in the whole country which suprised me considering how big cupcakes are these days, 1 was in bath, 2 in london and then one I booked which was the closest to where my Mom lives in Shropshire and it also looked the best..it is run by a woman who used to be a buyer for the patisserie department at Harrods!!!

So even though my Mom's birthday presents and cards were kind of cupcake themed I decided it needed to be quite impressive to fit the event! so I opted for this triple layer chocolate cake that came from a new recipe book I had just ordered. It was meant to have chocolate icing between every layer but I decided that might be a bit too much so one of the layers I filled with raspberry buttercream which was pretty tasty and then I decorated it with fresh raspberries.


Mara and By helped with the final production of it and by my own mistake I didn't know you had to cut your cakes to make them level! hence why it kind of looks like the leaning tower of pisa! but it still tasted good and hopefully was enjoyed by all! At least I'll hopefully know now for next time what to do! 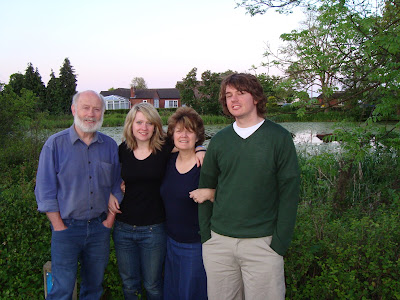 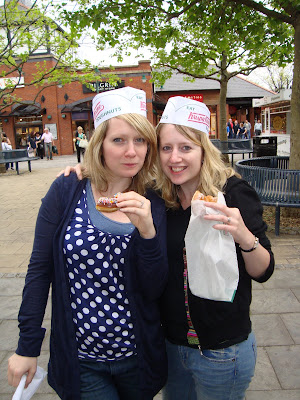 Posted by Cupcake Crazy Gem at 19:24 No comments: 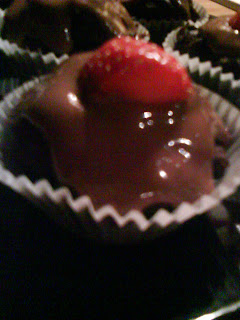 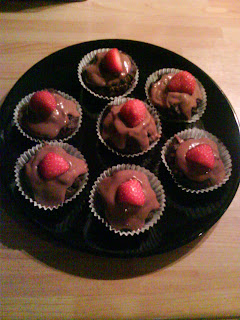 So I was very excited when I found that faircake (a cupcake company in london) were giving cupcake recipes on their website! I figured they would be amazing since if you look at their gallery their creations look pretty impressive but after baking up these choc cupcakes I was quite disappointed. By enjoyed them but I thought they were way too rich and not light and fluffy at all..more like muffin actually. I topped them off with melted chocolate for icing and a strawberry which was quite a good combo.

Apologies for the bad photo quality..I couldn't find my camera so had to take on my phone.
Posted by Cupcake Crazy Gem at 19:20 No comments: 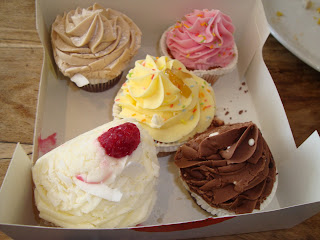 So as you know I'm always looking to expand on my visits to cupcakeries...so buying a new car took me back to Harpenden (where I grew up) by train...as I was approaching St. Pancras I just suddenly thought I'm sure they must have a place selling cool cupcakes here and so I was pleased when I was right by discovering Peyton & Byrne. I indulged in a box of 5..all the flavours they had on offer that day intending to share them out with my friends but most of them were on diets so I ended up being able to bring a few home too! The flavours were lemon, raspberry, chocolate, chocolate praline and raspberry and coconut (which was the one i got to taste!) and it was amazing..i definitely approved of the mountains of frosting as that in my opinion is the best bit! They were £2.50 a cake but definitely worth it.
Posted by Cupcake Crazy Gem at 12:46 No comments: 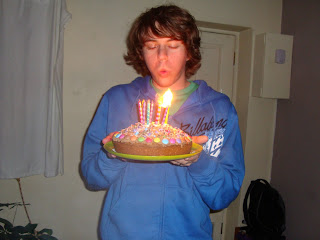 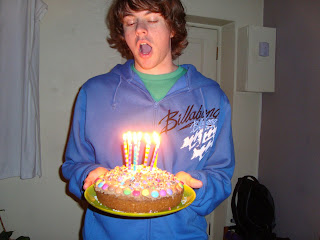 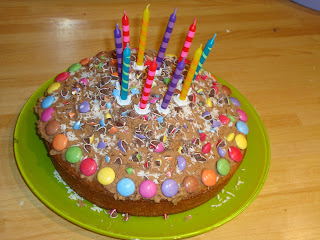 So Byron turned 23 and I asked him what kind of cake he wanted...I was tempted to make cupcakes but thought it's more fun having lots of candles on a cake to blow out! So he opted for chocolate and coconut..i found a recipe for choc coconut cake and made it..realising only half way through that in fact it was just vanilla coconut cake and then it was going to be chocolate iced so that was a bit of a disappointment, i didnt want to just randomly add cocoa in to mess up the consistencies so i left it as it was...decorated with chocolate buttercream and then crushed up smarties and dessicated coconut on the top!
Posted by Cupcake Crazy Gem at 12:18 No comments: