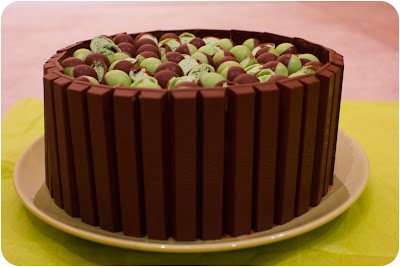 Hooray for internet! Ours has finally been activated, and so you can expect some serious blogging to go down around here.  I have a lot of delicious bakes to catch you up on! This first one was from back at the end of August when we had our first visitor in Scotland my father in law paid us a visit! It also happened to co-incide with his birthday, lucky him! So we called him in the week and asked him what sort of cake he wanted me to bake... 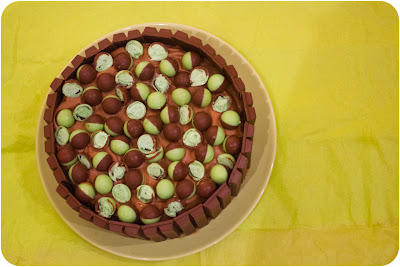 His response was 'chocolate'!! Soooo boring! There was no way I was just going to make a plain chocolate cake, so I urged him to think of some other flavours or chocolate bars he likes and eventually he came up with 'mint'! Perfect! Chocolate & mint is one of my all time favour flavour combos for baking...it's right up there with lime & coconut and raspberry & white chocolate for me! The last comment my father in law added was 'don't make it too rich'! When my husband relayed this comment to me, I stared at him in horror! The only cakes I know how to make are rich ones! 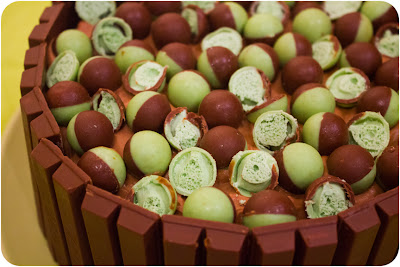 So thinking that I know best I ignored that last little comment, and went about planning a chocolate and mint cake.  As far as birthday cakes are concerned if I can't fit overload in the title of the cake, it's not worth baking! so I thought of every mint chocolate possible and in the end decided a kit kat and m&m cake would go down well since the last one I made was so well loved! So I stocked up on mint kit kat's, but then remembered we were in Scotland and not in Vancouver and so mint m&m's were nowhere to be found! Aero balls seemed to be a good alternative! and added a nice splash of colour to the cake! I also picked up some slabs of Mint Aero to melt into the frosting to give it a hint of mint, and I blitzed some of the chocolate into the mint frosting I sandwiched the cakes with...so really you can't get more mint in a cake if you try!

I used my trusty Primrose Bakery chocolate layer cake recipe because it never lets me down, and is always moist and fudgy.  The silky chocolate frosting is always the perfect companion and the addition of mint was a subtle but tasty one.  The mint frosting in the middle of the cake was perfect for breaking up the chocolate-y ness and the aero balls on top not only added great texture but also great flavour! and who doesn't love having 2 kit kat fingers with their cake to dip into the frosting! 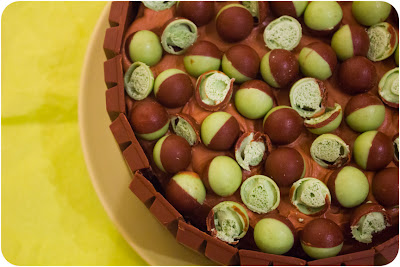 The book says it makes two 8-inch cakes, but I managed to make three 8-inch cakes with this recipe! I only used 2 and saved the 3rd cake for a rainy day!

Beat the butter and sugar together in a freestanding electric mixer with the paddle attachment.
Add the peppermint extract and double cream and continue beating for 3-5 minutes until light and fluffy.
Using a toothpick dab 3-4 spots of green food gel colour through the frosting.  Beat for a further 2 minutes until the green colour has blended into the frosting and is consistent throughout (you can add more or less green colouring to suit your tastes, I went for a pale green colour).
Crush Mint Aero into tiny bite size pieces, I used a blender to crush mine or you could use a zip-loc bag and a rolling pin.  Stir it through the frosting with a wooden spoon.

Melt the chocolate in 30 second intervals in a glass bowl in the microwave until smooth.  Leave to cool slightly.
In a large mixing bowl beat the butter, icing sugar, vanilla and double cream until smooth - this can take several minutes with an electric hand mixer.
Add the melted chocolate and beat again until thick and creamy.  If it looks too runny to use simply keep beating to thicken. 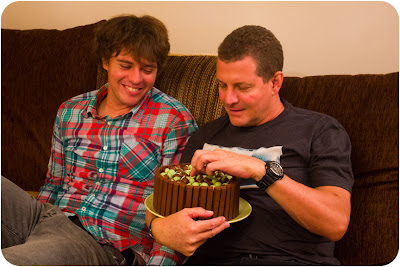 Here is the birthday boy trying to enjoy the cake before I had even taken the picture!