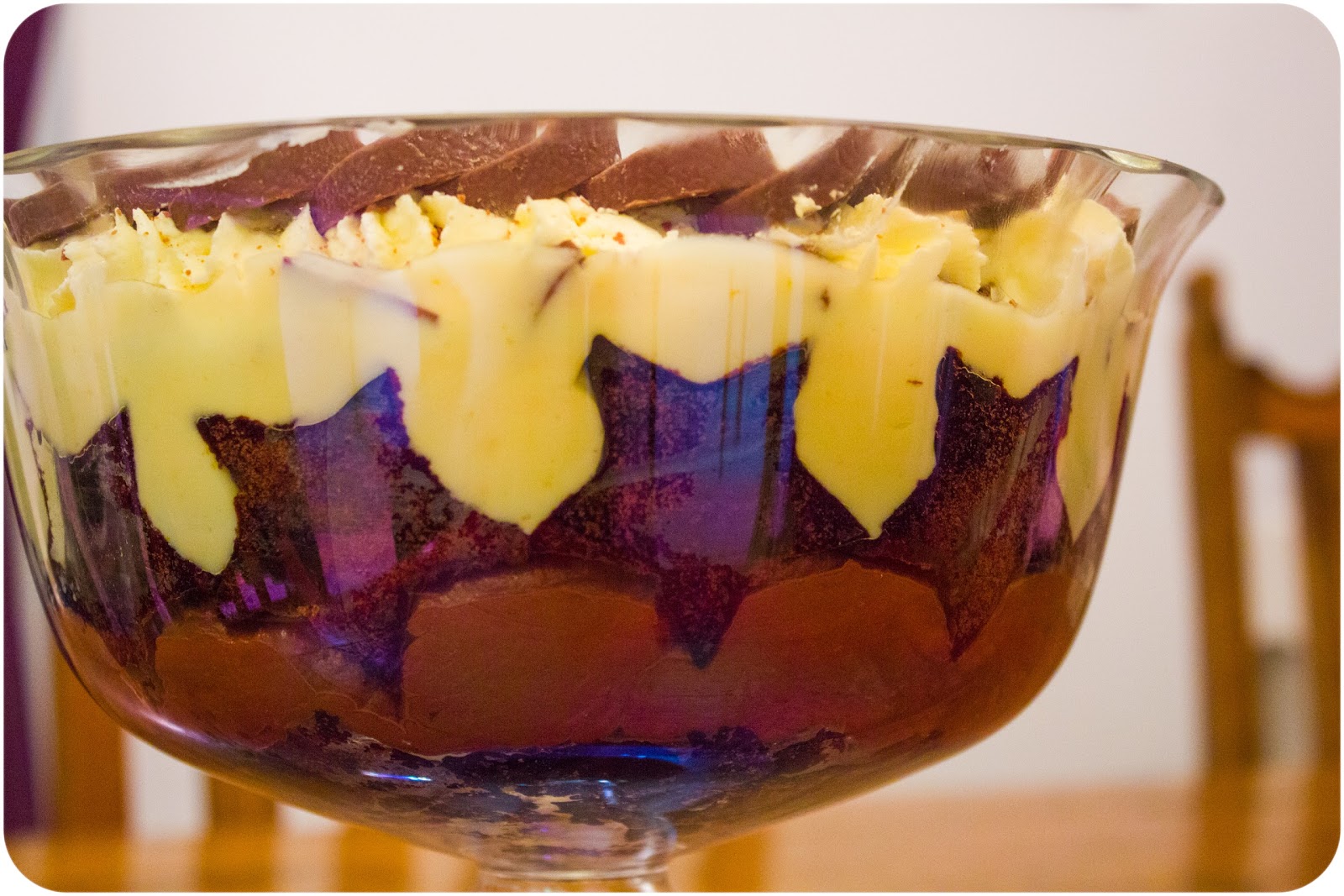 We spent Christmas day at my in laws this year, and I was tasked with the Christmas day dessert.  I spent months planning what I was going to make, and changed my mind a million times in between! In my mind a Christmas dessert should always involve peppermint, but since it gives my husband insane heartburn that was off the table! So then we came up with the idea of chocolate orange...I'm not really a fan of orange flavoured desserts - you won't have seen anything on my blog featuring orange before for this reason! so it's slightly ironic that this dessert turned into the craziest orange overload ever!!  In my mind it's also not Christmas without a trifle, but I don't like custard and knew I didn't want to make a boring old traditional trifle so a brownie trifle with mousse layers seemed like a great alternative! and before I knew it, this 9 layer beast had been dreamt up in my head! 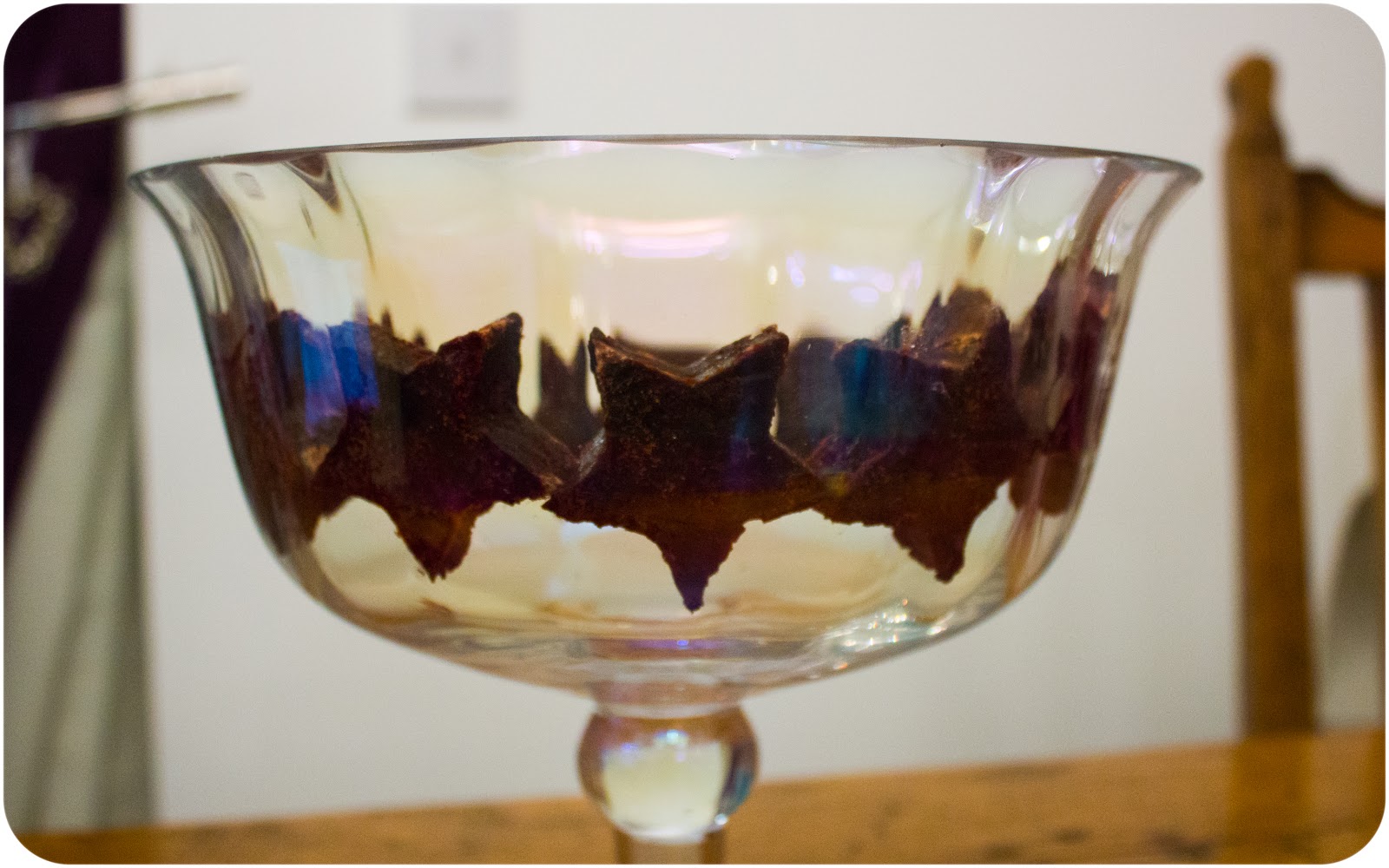 I knew it needed to look impressive sitting on the table (that's how I imagined I'd serve it...as it turned out I served it straight from the fridge and dished it up into bowls whilst everyone was in a different room so no one saw it anyway!!) but it made me happy at least that it looked pretty in the bowl! I had planned to do Christmas tree shaped brownies around the inside of the bowl, but my Christmas tree cutter was larger than I had remembered it being! so I settled on stars...which are still slightly festive! Luckily they were so moist they just stuck to the side of the bowl all by themselves! and then the subsequent layers that I filled the bowl with held them in place! 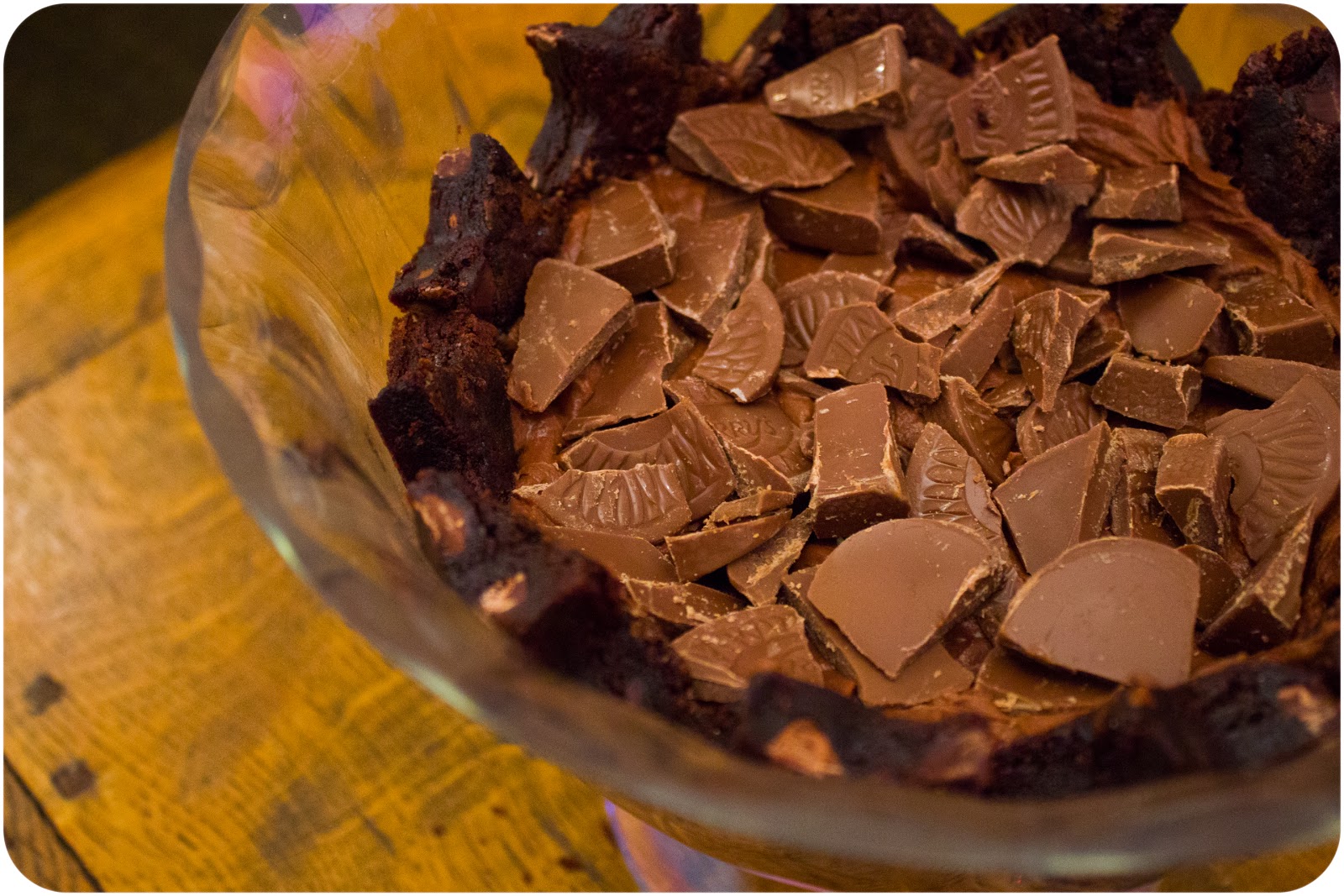 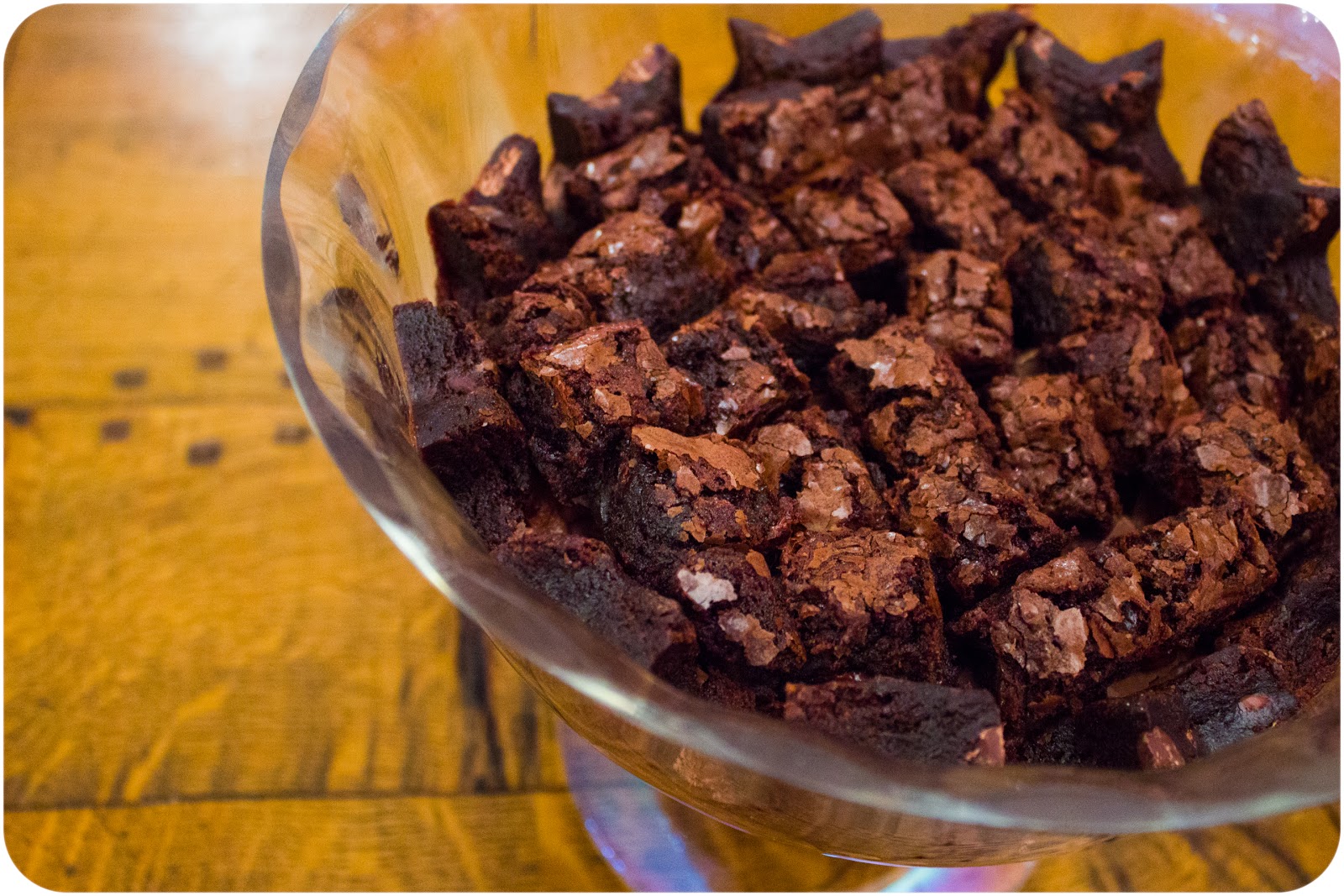 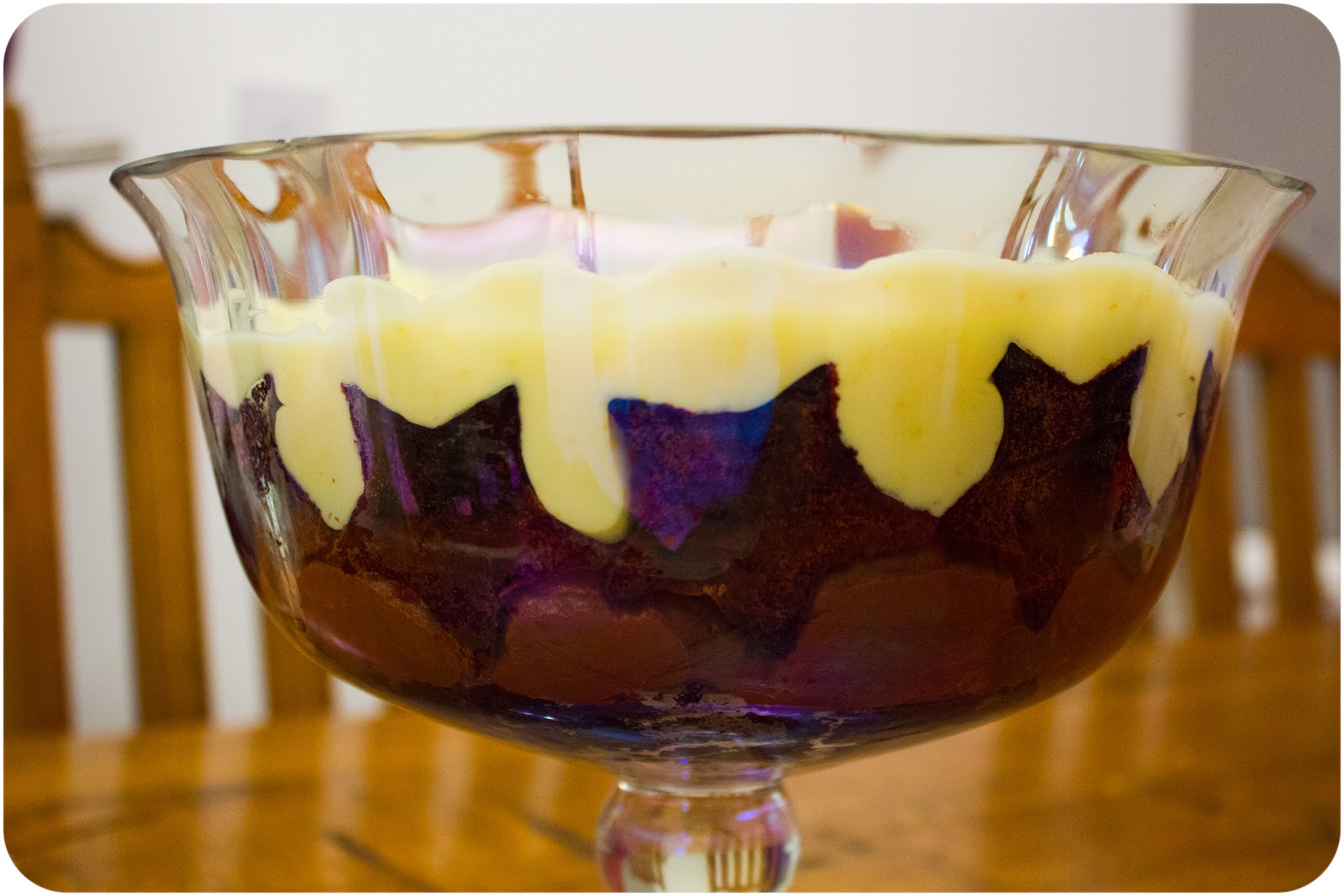 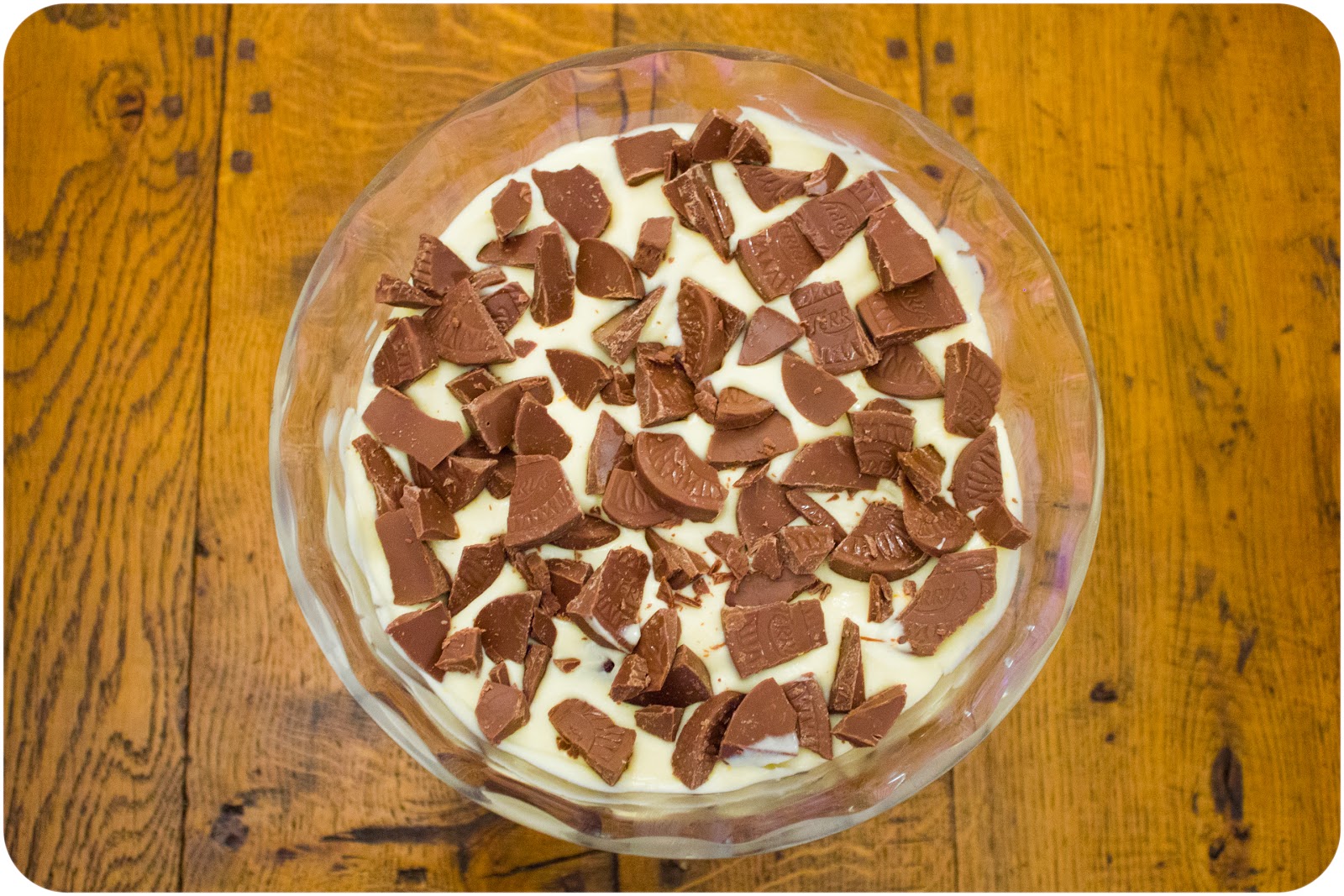 Some piped on whipped double cream brought everything together, and I used mini Terry's chocolate orange pieces to decorated, and crumblings of flake too...because it's not a trifle unless it's been crumbled with flake - fact!

There were a lot of components but all were pretty straightforward and it came together quicker than expected.  I used the amazing Ghirardelli brownie box mix from Costco because when it's 8pm on Christmas Eve and you haven't started on dessert yet, you need to cut some corners! but if you had more time than me you could obviously make your own brownies! I also used shortcut mousse recipes, that didn't require egg, because I didn't have time for things to go wrong so a cream cheese no fail mousse was the way forward!

Although you'd think it would be too much orange in one dessert, it was perfectly balanced by the creaminess of the mousse layers, and the richness of the chocolate brownie and the tang from the cream on top helped to break through the sweetness - I wanted another helping immediately after eating my first! which for an orange hater shows just how yummy this dessert really was! 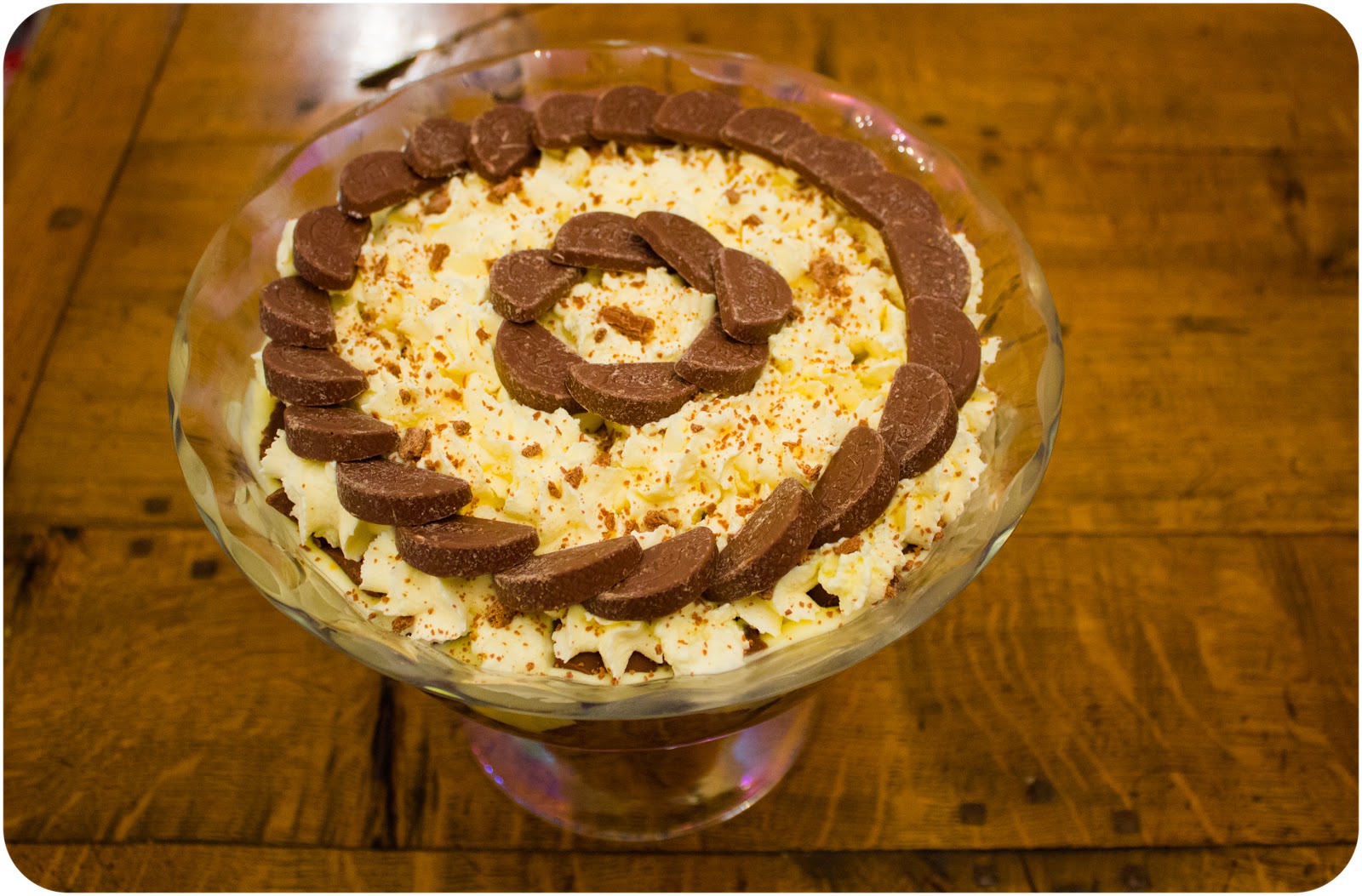 Whisk 500ml double cream using a stand mixer. Once soft peaks start to form it is done.  Transfer it to a bowl, cover with clingfilm and refrigerate until needed.

Meanwhile chop the milk and dark chocolate into small pieces and melt in a heatproof bowl, set above a pan of boiling water.  Set aside to cool.

Beat the cream cheese, caster sugar, orange juice and orange zest together until light and fluffy.  Fold in the cooled chocolate, and fold in half of the whipped cream from the bowl in the fridge.  Your milk chocolate mousse is finished.

Spread over the layer of brownie chunks in the trifle bowl.

Chop Terry's chocolate orange pieces using a knife, and spread a layer of them over the chocolate mousse.  Add another layer of brownie chunks.

Beat the cream cheese, caster sugar, orange juice and orange zest together until light and fluffy.  Fold in the cooled chocolate, and fold in the rest of the whipped cream from the bowl in the fridge.

Spread your white chocolate orange mousse over the brownie chunk layer in the trifle bowl.

Whisk 350ml double cream in a stand mixer until stiff peaks form.  Transfer into a piping bag and using a star tip pipe small little stars all over the top of the trifle.  Crush a cadbury's flake and sprinkle the pieces over the cream.

Arrange the mini Terry's chocolate orange pieces so that they overlap slightly over one another in a circular pattern around the edge of the cream, and do a smaller circle in the middle of the bowl too.

Refrigerate the trifle until it is ready to be served.

FYI: The ingredients listed are enough to make two bowls of trifle.  I made a slightly smaller bowl alongside the main trifle bowl (without the star brownie shapes around the edge) and so if you only want one trifle you could halve the mousse quantities but would still need two pans of brownie if you plan on doing the star shapes.
Posted by Cupcake Crazy Gem at 15:49 7 comments: 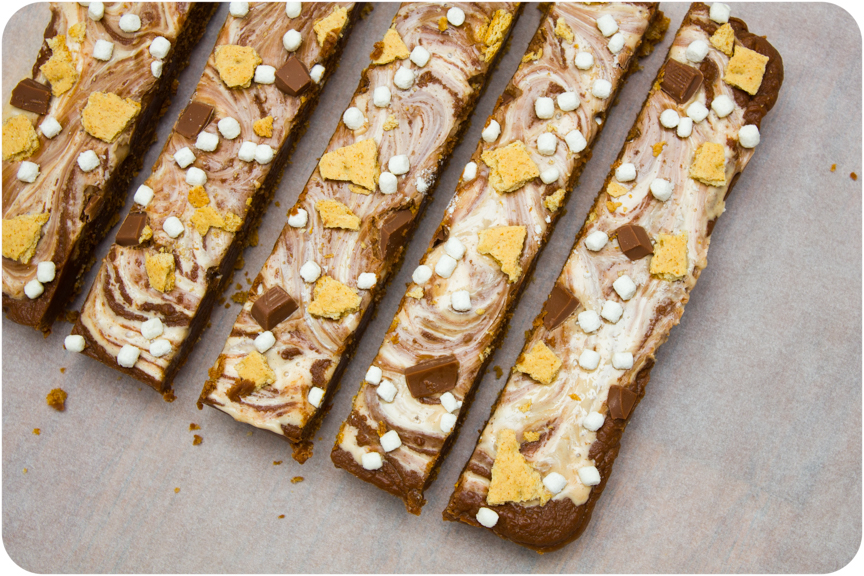 I made this in mid December for some friends who were in need of cheering up! I added these photos to my blog and planned to write it up at some point to tell you all what a great little sweet treat Christmas prezzie this fudge would make...but here we are on January 3rd and Christmas has been and gone, whoops! It would still make a great gift...just not a Christmas one obviously or you can bookmark it for next December! 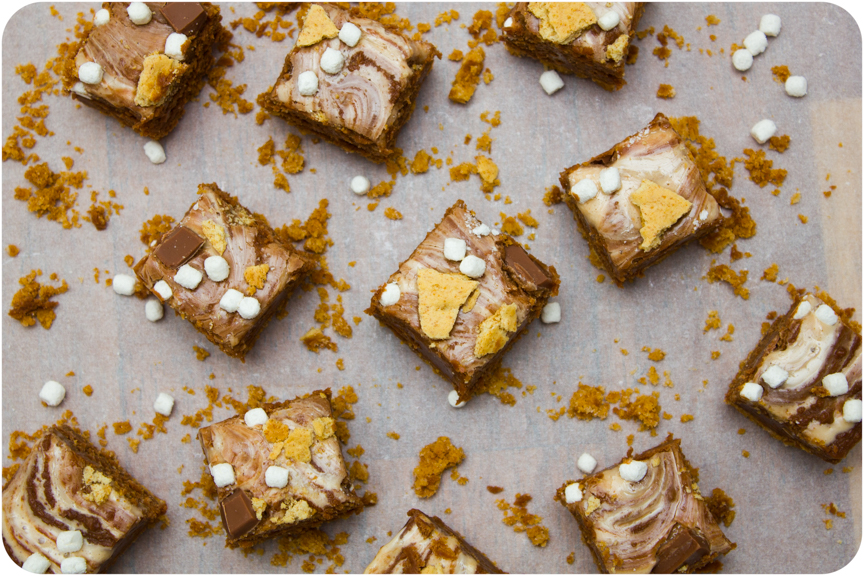 My favourite part of making this fudge, aside from eating it, was when my husband asked me what I was making when he came home to find the ingredients on the table one day.  I replied fudge, and he turned to me with a totally shocked look on his face and said 'are we fudge people?' it was hilarious! I cracked up laughing!! but he was right to question my judgement - we are not fudge people! I can probably count the number of times we've eaten fudge on one hand.  It is not something I am ever too bothered about.  So I told him it wasn't for us...but also that it was chocolate and peanut butter s'mores fudge and not just any old fudge!! 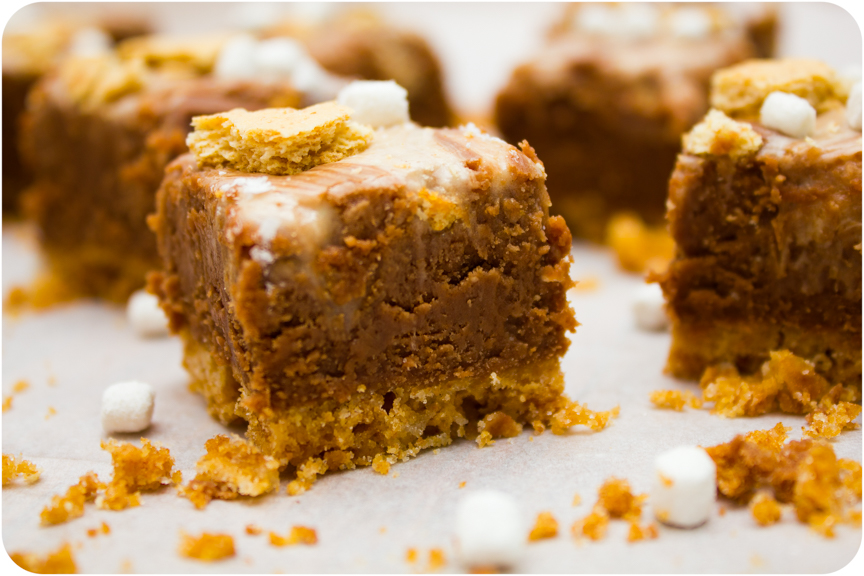 We both agreed that the addition of the graham cracker crust made this better than any other fudge we have had.  Often fudge is just way too sickly and you don't want to eat more than one piece but the crust definitely broke up the sweetness and added another good texture.  The peanut butter gave a subtle undertone to the creamy chocolate and the marshmallow swirl with added marshmallows on top gave it some extra chew!

I was also surprised at how easy it was to make! The only other time I've attempted fudge was this candy cane fudge last Christmas but since it was only made with condensed milk it was the cheats kind of fudge...making real fudge has always scared me but by using the microwave in this recipe it is a no fail recipe!

Give it a try! Your tastebuds will thank you...even if you're not fudge people! 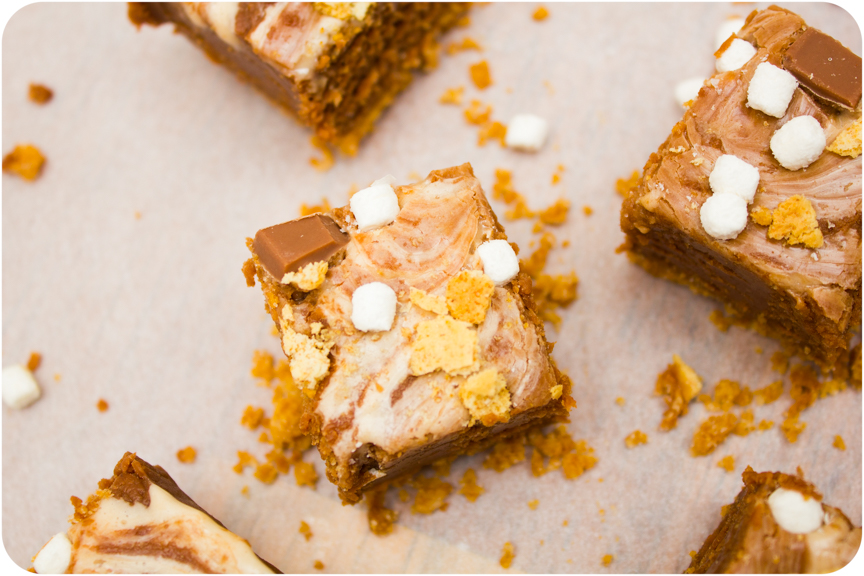 Preheat your oven to 190 degrees C.
Line an 8x8 inch baking pan with tin foil - leave extra so it hangs over the edge.

Crush your graham crackers into a fine powder and mix them with the butter and sugar to form the crust.
Press the crust into the bottom of your prepared pan. Bake for 15 minutes until the edges and golden brown.  Set aside.

In a large saucepan, over medium heat, combine the Marshmallow Fluff with the sugar, evaporated milk, butter and salt.  Bring to a boil stirring occasionally.

Meanwhile, chop your chocolate into chunks and have your peanut butter and vanilla measured out and ready.  Measure out your mini marshmallows and have them ready too.  It is important to have everything already prepared because once you remove your pan of ingredients, everything needs to be stirred in immediately.

Add your chocolate chunks, peanut butter and vanilla in with the rest of the cooked mixture and stir until mixture is smooth.

Spoon marshmallow mixture over and swirl in with a knife.