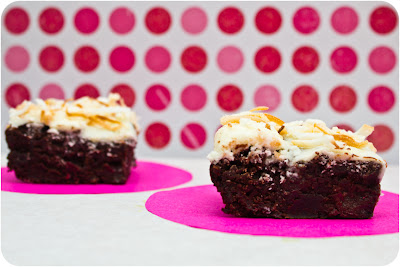 The lovely people over at Find Me A Gift sent me some baking goodies to test out.  I was beyond excited when these oh so cute Matryoshka M-Cups arrived on my doorstep! Have I lost you yet? yes, I learnt something new too.  I always just used to call these Russian dolls but their official name is Matryoshkas and Wikipedia defines them as 'Russian nesting dolls'.

I have always loved these little dolls ever since I was a child.  There was a girl who lived on my street who I used to have to play with from time to time, you know because my mom and her mom were friends so while they would catch up on the neighbourhood gossip we would have to play together.  She was a few years younger than me and for whatever reason I wasn't especially fond of her...so I was never that keen on these play dates - but that all changed on the day her dad brought her home a super cool present from his Russian business trip.  You guessed it, it was an amazing hand painted set of Matryoshka dolls and I became mesmerised with them! From then on, I couldn't get to her house fast enough and I would spend hours lining up all the little dolls and then re stacking them again, so of course as soon as my measuring cups arrived I had to line them up and check them out! 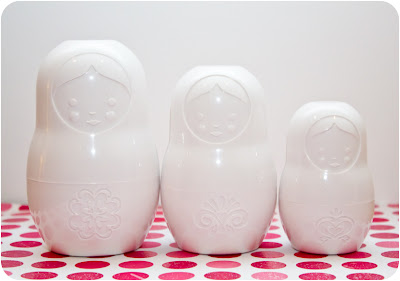 Obviously they're plastic and not hand crafter by Russian painters but I think they're pretty cool all the same! There are 3 of them but they make up 6 different measurements as both their heads and bottom halves can be used.  That was another thing that as a baker I loved, I got a 2/3 cup! Where have you been hiding all this time? My old set of baking cups used to consist of a quarter, a half and one cup measurements.  I lost count of the amount of times I used to ask my husband how I could make 2/3 of a cup using a half and a quarter, he was less than impressed with my poor mathematical skills so this time I got to bake away to my hearts delight and not pick my husbands 'Kumon maths' brain once! 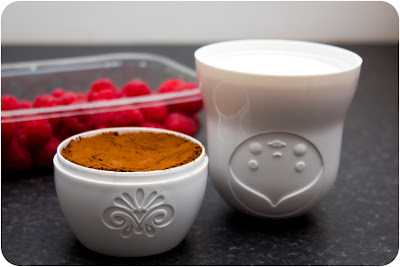 I think these would make an awesome gift for a baking loving friend, and since I'm particularly into 'themed' presents why not go the whole hog and buy them the matching measuring spoons and some cute Russian doll lipbalms too!

But onto the brownies...because who doesn't love a brownie - but these aren't just any old brownies.  Oh no, these ones have been building in my mind for a while now.  I knew I wanted to make some brownies with fresh raspberries in because out all the best brownies I've ever had in my life have contained raspberries, and when I came across this amazing chocolate I knew the raspberry and chocolate variation beaten into the mix would take these brownies over the edge!

Of course I needed to add a frosting to combat the richness of these brownies and what better flavour to use than coconut.  Everyone knows coconut & raspberry are a perfect pairing - throw in some fudgy brownie and this turned into one dreamy dessert.  I even toasted up some shredded coconut to throw on top as well.

All in all these could go down as some of the best brownies ever to have graced my oven. 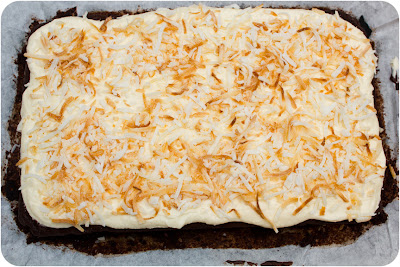 Preheat oven to 160 degrees C.  Grease a 12 x 8 pan and line it with parchment paper (you don't have to do this but I find it easier for cutting the brownies later).


Melt the butter in a saucepan over medium heat, until the butter begins to turn golden brown (about 5-10 minutes). Stir the butter occasionally, keeping a close eye on it, as it will go from fine to burnt quickly.

Remove the pan from the heat and stir in the sugar, cocoa powder, vanilla extract, water & salt. Let the mixture cool for 5 minutes. Add the eggs, whisking constantly as you add them and beat until the mixture is shiny and smooth. Put the raspberries in a small bowl and add the flour, using your fingers make sure all the raspberries are covered in flour (this prevents them from sinking to the bottom). Stir in the flour/raspberry mix and beat for 1 minute. Pour the mixture into your prepared pan.

Bake for about 30-35 minutes, or until a toothpick inserted into the center comes out with a few crumbs attached. Transfer the pan to a cooling rack. When cooled, remove from the pan by lifting the parchment paper out.

Beat butter until smooth and creamy.
Add sugar and coconut milk and beat until a spreadable consistency.
Spread the frosting over the brownie slab using a spatula or flat edged palette knife.
Toast some shredded coconut under the grill for 3-4 minutes or until golden brown.
Once the coconut has cooled down, sprinkle it over the frosting and cut the brownie into 18 squares.