A Peanut Butter & Brownie 9 Layer Trifle!! and the end of exams! I am writing this blog post and it feels so good not be doing it sneakily! I'm officially allowed to look at cupcakes and my google reader and blog as much as I like because I am done with exams! Hooray (yes my husband does have to monitor my every internet move because if he didn't I would spend all day looking at cupcakes rather than looking at experimental validity!)

As a consequence of said exams and essays, I am wayyy behind in blogging, how inconvenient of them to get in the way right?! So I bring you the dessert that I made for our Christmas Day feast! In my family growing up, probably like most other English families, we had Trifle on Christmas Day - which is great if you like custard and cream but I don't! My mom used to make me my own special little trifle in a bowl sans custard and cream!

This year we spent Christmas Day at my mother-in-laws and I offered to make the dessert.  I still wanted to keep it somewhat traditional so stuck with trifle...but as my husbands family are all peanut butter lovers and mine are not I decided it was my chance to unleash this 9 layer beast on them, courtesy of Paula Deen! 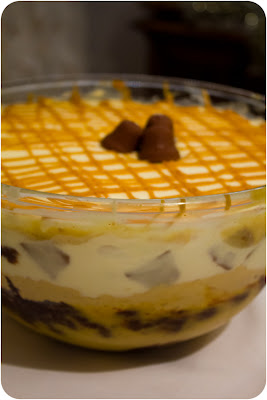 Although it seems like it should take alot of preparation, it really didn't.  My husband helped me make it on Christmas Eve and between the two of us it had been whipped up and left to set in the fridge within an hour.  Easy peasy...and for the delicious results it was definitely worth it.  I had never tried Jell-o pudding mix before and was a little skeptical but once you whipped the peanut butter into it it became a creamy peanut butter flavoured dream! Combine that with moist fudgy brownie, bites of peanut butter cups covered in chocolate, a taste of peanut butter frosting and some sour cream and whipped cream to cut through the richness and you're talking about one mouth watering dessert!

This dish was a little pricey to make, I had been in London the day before to source the Jell-o vanilla pudding, peanut butter cups and peanut butter chips from Partridge's because you can't buy those ingredients at regular supermarkets here. So, unless you're happy to spend more on making a dessert than you would on a meal out, it might be best to save it for a special occasion! but if you live in America and those ingredients are freely available on your supermarket shelves then bake away! 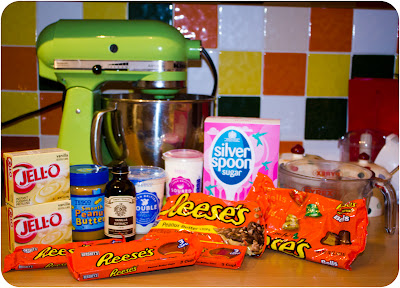 As there were only 4 of us sharing this dessert on Christmas day we had tons left over! It is super rich so small portions are the key! So on boxing day I took the rest of it up to my family, remember the family who don't like peanut butter, and let's just say this dessert changed their mind! Now both sides of my family are peanut butter lovers!
Posted by Cupcake Crazy Gem at 13:15