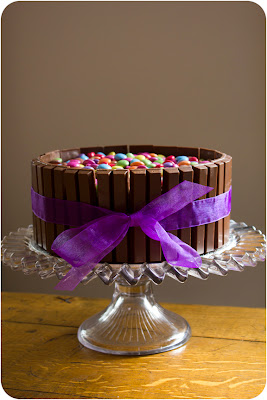 Last week was Byron's birthday! I have been anticipating baking his cake for about the past 2 months now! and I had big plans...that didn't last for too long when he told me he wanted a Smarties cake....

again?? I hear you say! yes I know...again! I was disappointed too...apparently the smarties cakes of '09 and '10 were so great he didn't want to break with tradition! Could I even convince him to have m&m's so at least we could have incorporated a bit of flavour in there like mint or coconut? no...only Smarties would do! 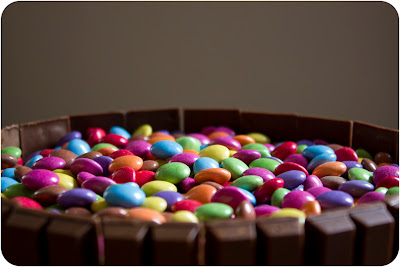 So Smarties it was...and a whole lot of Smarties too - I initially bought 7 tubes of smarties to pile on top of the cake but at the last minute dashed out to buy 7 more! What the birthday boy wants the birthday boy gets! although I guess 14 is an improvement on the 22 tubes I had to buy for his cake last year! 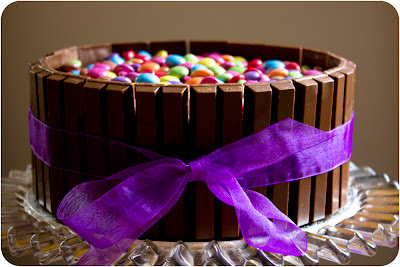 I finished it off with this lovely purple chiffon bow, purple is my FAVE colour and I think it's even starting to rub off on Byron a little since a few weeks ago he bought a purple polo shirt and he would have never have done that at one time! so I decided to strike while the iron is hot and press on with the purple theme! 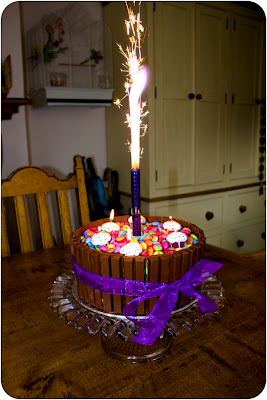 Cue matching purple fountain candle! These things are the best! and certainly make everything seem more impressive, I even managed to sneak some little cupcake candles in there too!

and this time round I'm not going to leave you hanging, I've decided to not be lazy and post it without the recipe...I even had to delve into the attic to get out my recipe book to make sure I posted it perfectly so here's hoping it goes to some use! This is hands down the best chocolate cake I've ever eaten, it always turns out delicious and stays moist for up to a week after too! Perfectly chocolatey without being too rich, and even being paired with the chocolate frosting isn't an overkill! If you're looking for a go to chocolate celebration cake recipe - this one is a winner!

The book says it makes two 8-inch cakes, but I managed to make three 8-inch cakes with this recipe!

Melt the chocolate in 30 second intervals in a glass bowl in the microwave until smooth.  Leave to cool slightly.
In a large mixing bowl beat the butter, milk, vanilla and icing sugar until smooth - this can take several minutes with an electric hand mixer.
Add the melted chocolate and beat again until thick and creamy.  If it looks too runny to use, simply keep beating to thicken.

Don't do like I did and buy 4 multi packs of Kit Kats, the cake I took my insipiration from on google was clearly baked in way bigger pans than I used and so I had waaaay too many Kit Kats left over!
Do do like I did and check each Kit Kat once it is unwrapped for imperfections...only the prettiest looking made the cut for my cake, yes that did mean I ended up eating about 8 lots of rejects...all in the name of quality control of course!

Sandwich the cakes together with a generous layer of chocolate frosting.  Then decorate all around the sides of the cake with the same frosting, you can be as messy as you like as the Kit Kats then go on top but they may not sit perfectly straight if your frosting isn't perfectly straight so I still smoothed down my sides!
Brush a very thin amount of frosting onto the back of each Kit Kat and starting at the base of the cake stick them around the edge.
Once you have a completed edge, fill the middle of your cake with Smarties!
Sit back, marvel at your creation and then devour the yumminess!
Posted by Cupcake Crazy Gem at 19:08