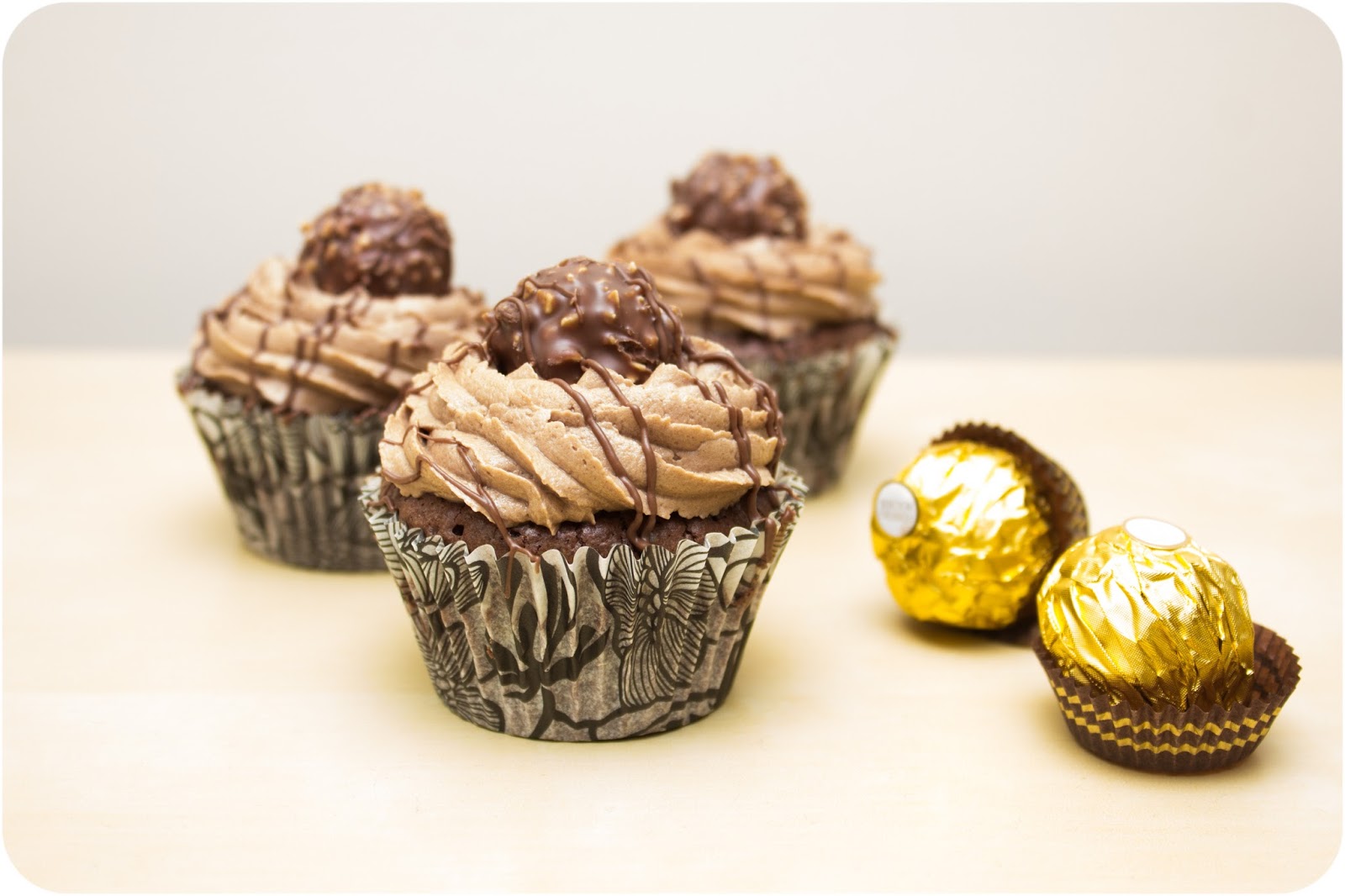 Generally, I like to try and space out blogging about similar flavours but too be honest I've been baking with Nutella SO much recently that it's proving difficult! Also, I instagrammed this picture of the cupcakes earlier and my sister messaged me to say her and her colleagues were drooling over the pic and since it's her turn to bring cakes in to work on Wednesday she'd like the recipe so I figured it had to be done!!

So hot on the heels of the Fudgiest Nutella Brownies, I bring you these Ferrero Rocher brownie cupcakes with Nutella frosting. 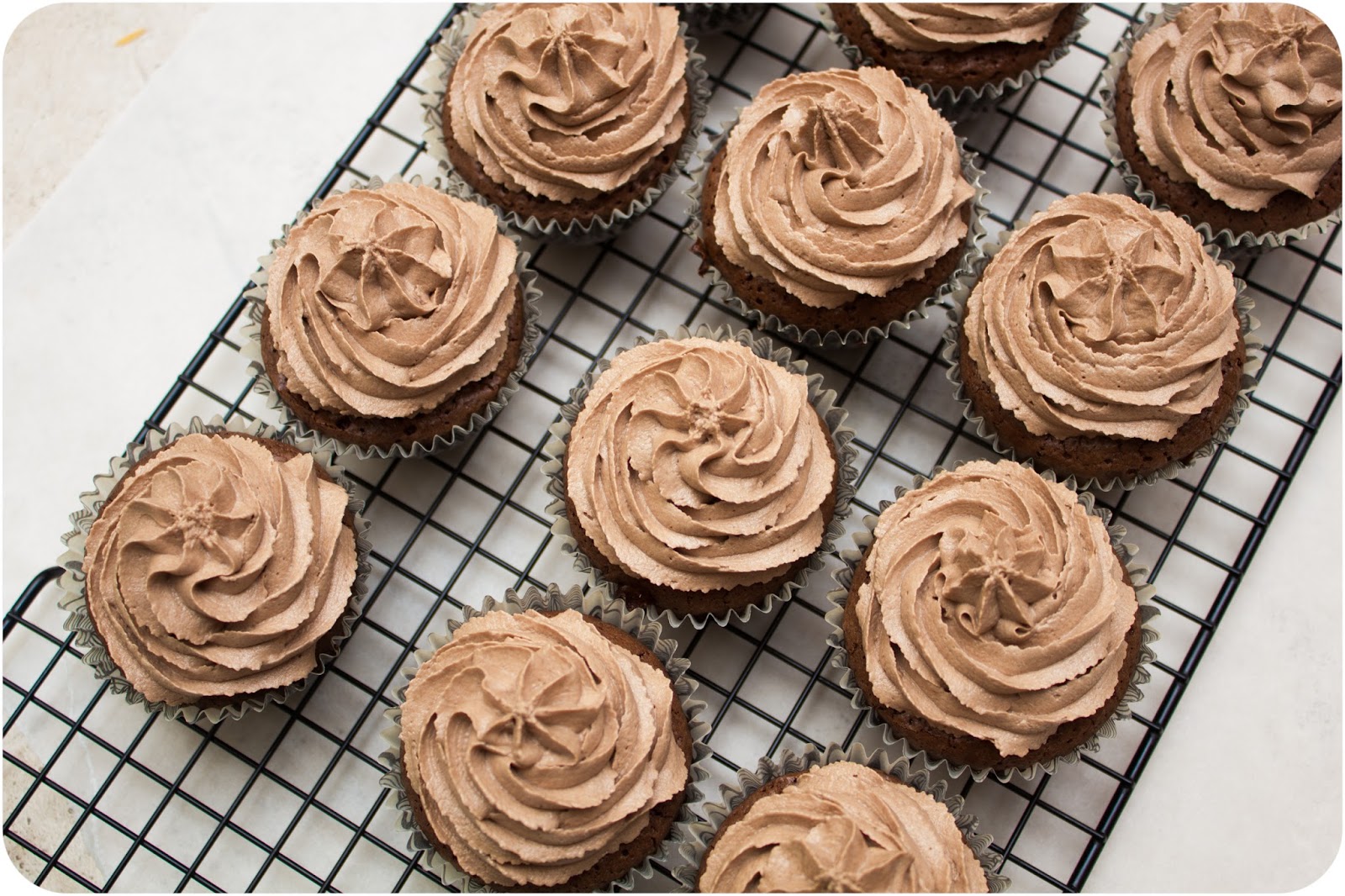 Our time in Scotland is very swiftly coming to an end, we have just a week and a half left! So when some of my mummy friends organised an impromptu picnic for today, since it was going to be nice weather...and in Scotland when the sunshine finally comes you do drop everything and get outside, I decided it would be one of my last chances to bake for them and so I'd better pull out all the stops! 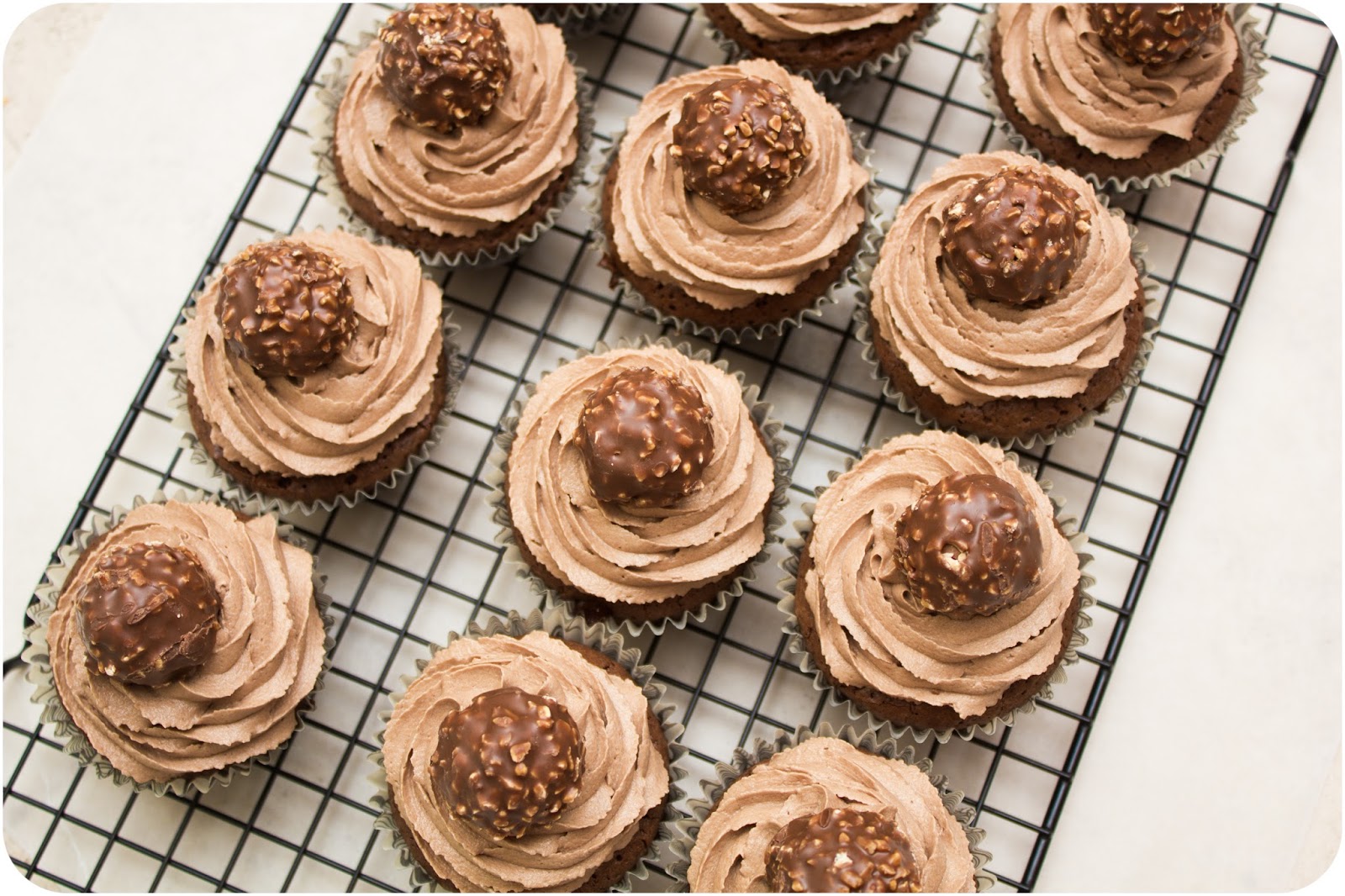 So I whipped up my all time favourite Martha Stewart Brownie Cupcakes as the base, because they are so fudgy and delicious...and I'm not going to lie, because they can be made in just one bowl and don't require turning my Kitchenaid on because the baby was napping!  When she woke up, I brought her into the kitchen in her little bumbo as my 'sous chef' whilst I whipped up this creamy dreamy Nutella frosting - Ella just loves the loud noise of the Kitchenaid so was more than happy to sit and listen to it working its magic!

...and of course no Nutella cupcake is complete without a Ferrero Rocher topper! So a whole, I was considering cutting them in half but I figured if we were going to go decadent we might as well go all the way, Ferrero Rocher was placed on top of each mound of frosting and some melted Nutella was drizzled across them as the finishing touch!

If you're a chocolate lover...you are going to love these, if you are a Nutella lover - even better! Go and whip up a batch today, you will be so happy that you did! 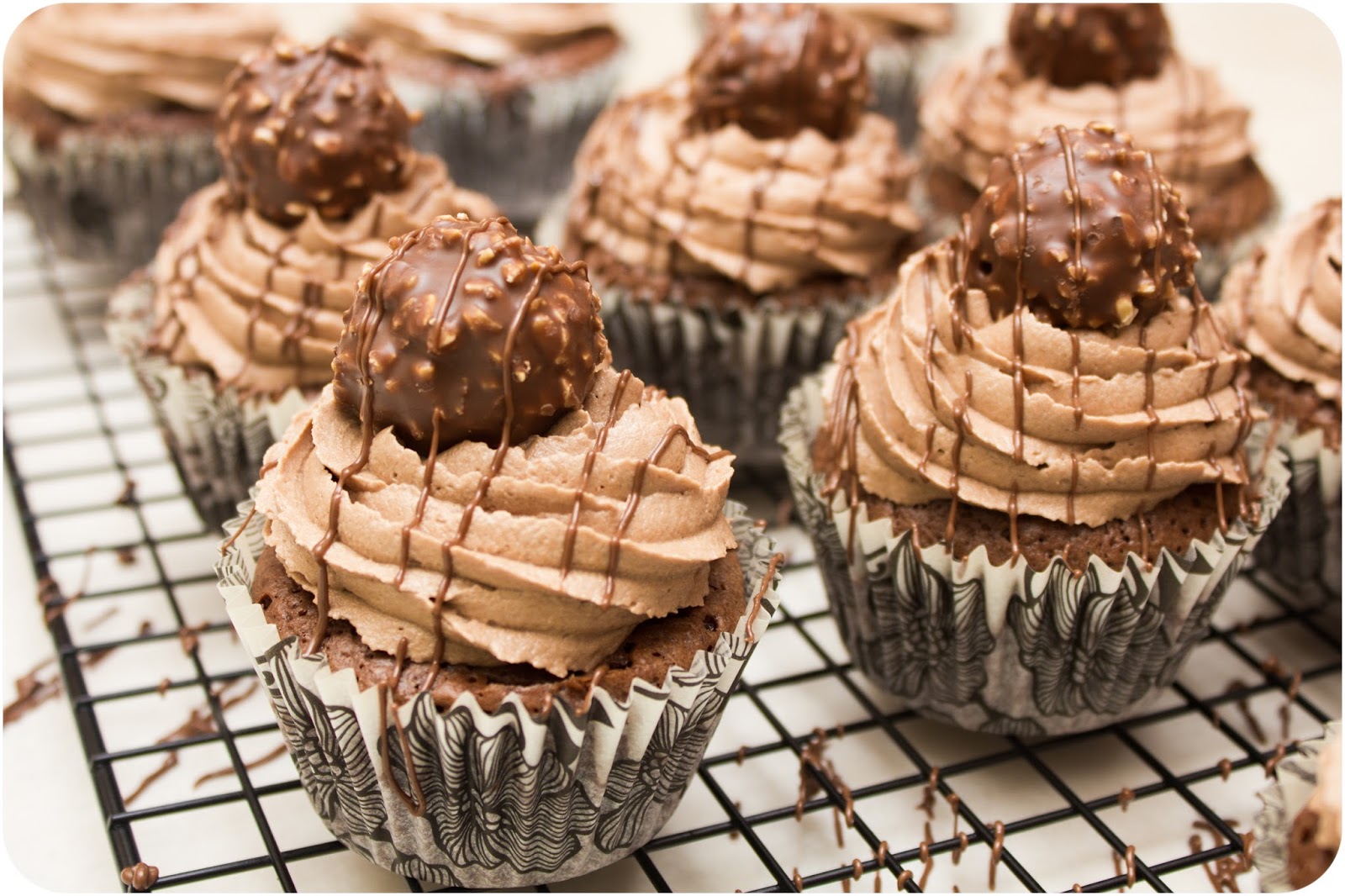 Preheat oven to 180 degrees C/350 degrees F.
Place both chocolates and butter in a heatproof bowl set over a pan of simmering water.  Stir occasionally until just melted, about 4-5 mins.
Remove bowl from heat.  Whisk in sugar and salt until mixture is smooth, whisk in eggs to combine.  Gently whisk in flour and cocoa just until smooth (do not overmix).
Fill cupcake cases until 3/4 full.  Bake, rotating tin halfway through, until an inserted knife comes out with only a few moist crumbs attached, for 20-25 minutes*.


*Mine were ready at 22 minutes - you want moist crumbs to still be attached to your inserted knife since these are brownies and fudgy, and not cake like.


Nutella Frosting:
From My Baking Addiction

In a large mixing bowl, cream butter and Nutella until thick, fluffy and well combined for about 5 mins.  Slowly add in icing sugar, and continue mixing until well blended.

Beat at high speed until frosting is smooth and fluffy, about 3 minutes.

*I added 3 tbsp of milk to create stiff enough frosting that would hold its shape when piped.  If I'd had cream in the house I would have rather used that as it makes for a tastier frosting!

Frost cupcakes.  Add a Ferrero Rocher on each one.

Melt 4 heaped tsp of Nutella in a microwave safe bowl for 1 minute.

Transfer to a piping bag, snip a tiny bit of the end and drizzle over the cupcakes. 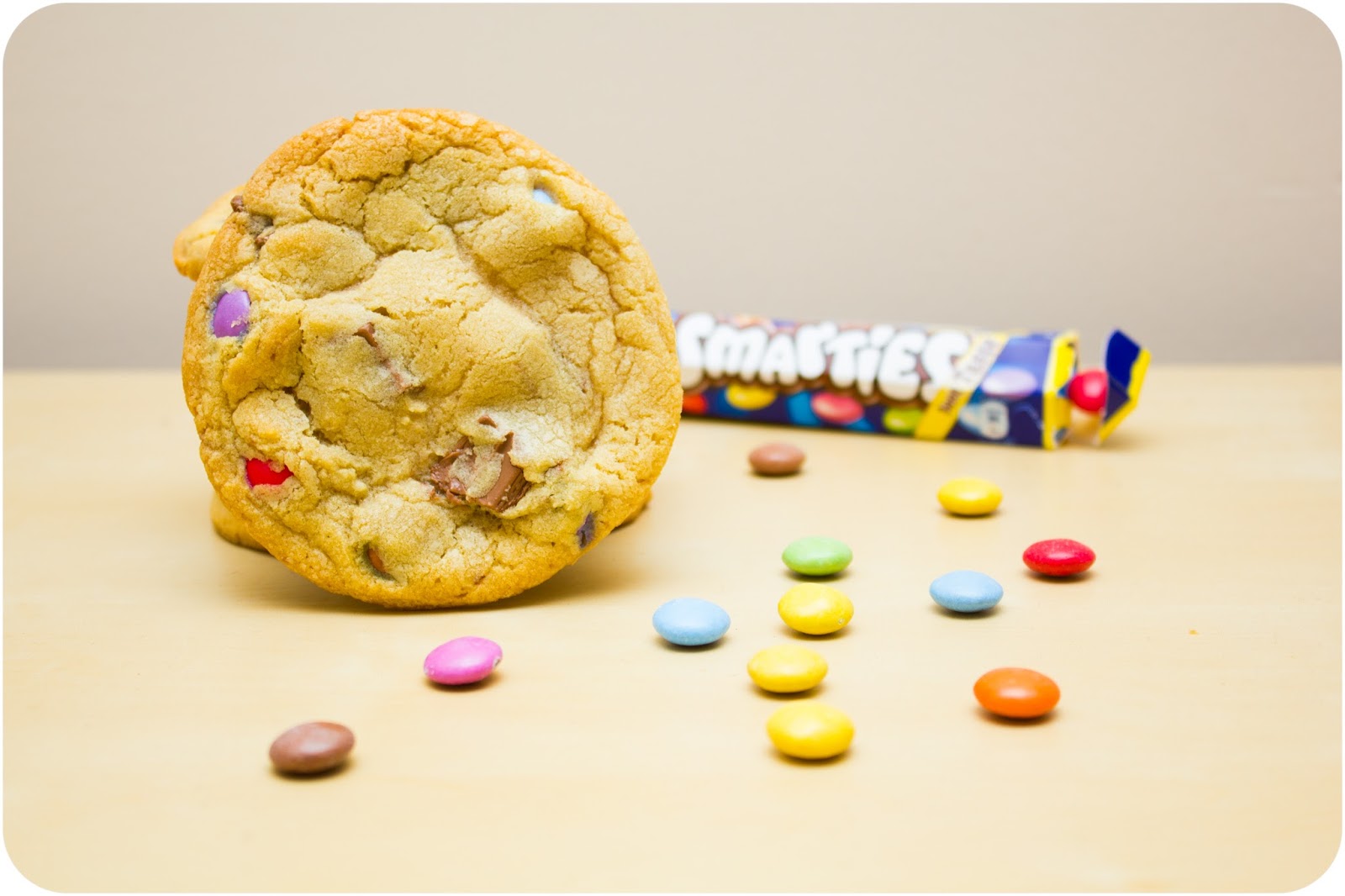 I have a smarties obsessed husband! I haven't had the inclination to eat anything smarties related since I was about 10! Byron, on the other hand, requested smarties birthday cakes for three years running!  So when we were in the supermarket the other day he picked up a multi pack of smarties and asked if I could turn them into cookies - how could I say no?! 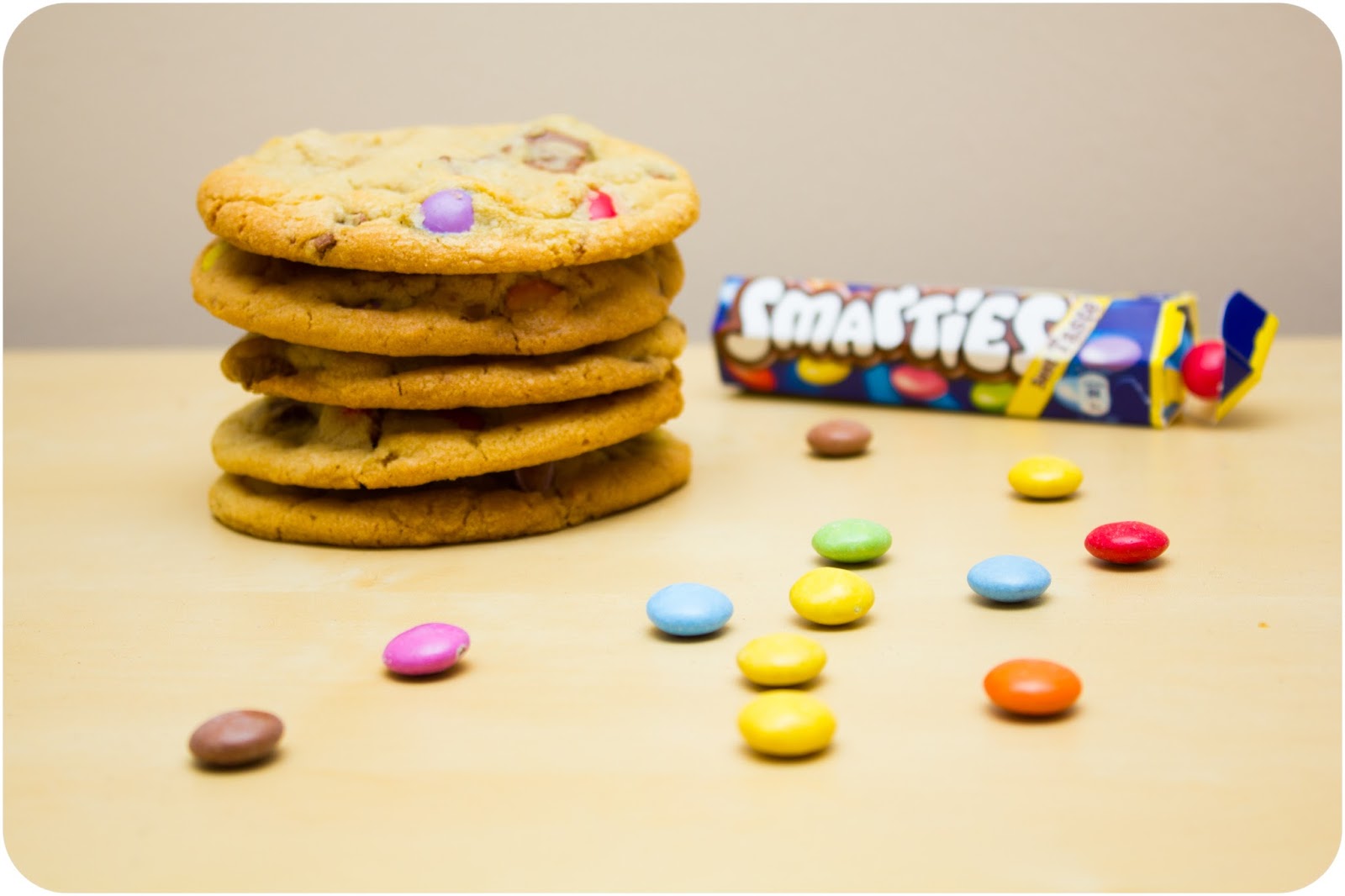 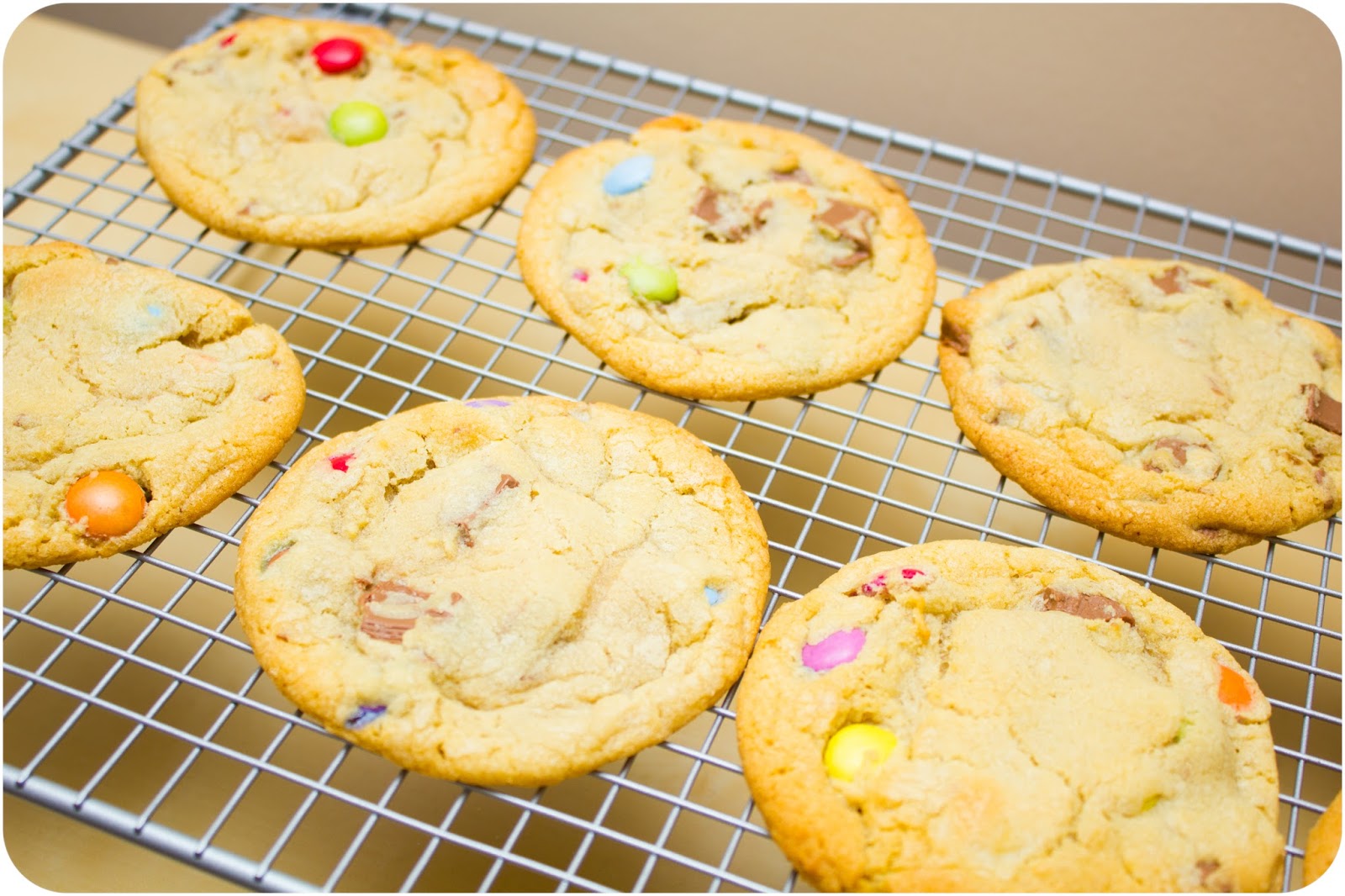 These cookies were the perfect mix of chewy and soft on the inside and golden and crisp on the outside.  I got served a very overdone choc chip cookie at a cafe the other day and it made me sad! Surely everyone knows the rule that you take out cookies when they look underdone and that will let them bake to the perfect consistency as they cool down on the tray!

I got out my triple tiered cooling rack in anticipation of the vast amount of cookies we were going to bake up, but I needn't have bothered because we'd demolished the first batch before the second was even out of the oven! I seem to remember it was a grey and rainy Saturday afternoon...and when all your friends down south are posting gloriously sunny blue sky antics on instagram and facebook and you're stuck in gloomy Scotland on a grey day when it SHOULD BE THE MIDDLE OF SUMMER, well...eating your way through whole batches of cookies is the only thing to keep spirits up! 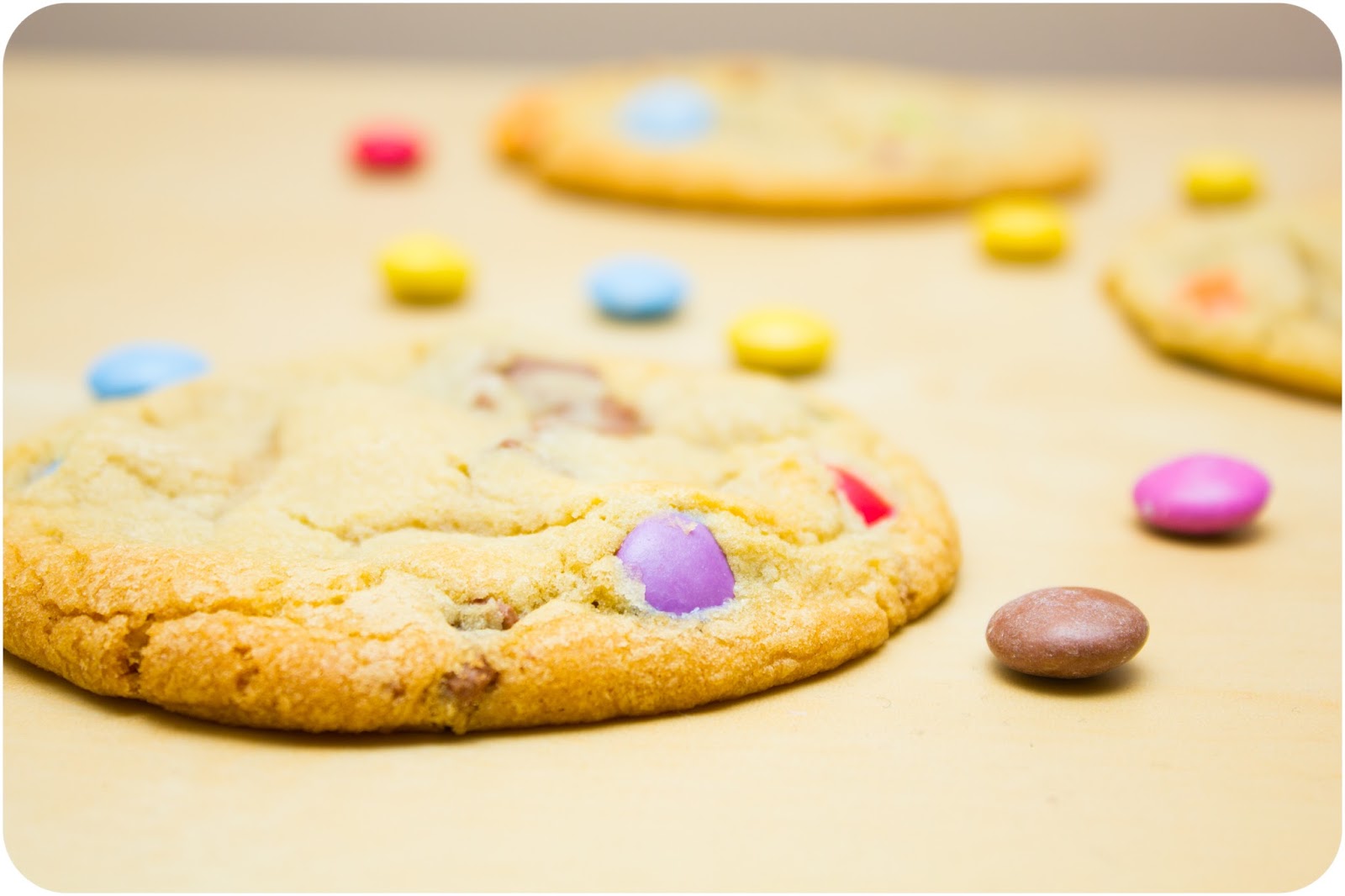 Preheat oven to 180 degrees C.
Line a large baking tray with greaseproof paper, or a silpat liner is what I use.

In a large mixing bowl, or the bowl of a stand mixer, cream the butter and sugars until well combined.  Add the egg and vanilla, mixing to combine.  Add the flour, pudding mix, bicarbonate of soda and salt, stirring to combine with a wooden spoon.  Chop up the chocolate chunks and add them in with the smarties, stir with a spoon or spatula until they have all been incorporated.

Using a medium cookie scoop, place dough 1 inch apart from each other.  Bake for 10-12 minutes until cooked through (but still appearing to look underdone).  Let cool on cookie sheet for 10 minutes and then transfer to a wire rack to cool completely. 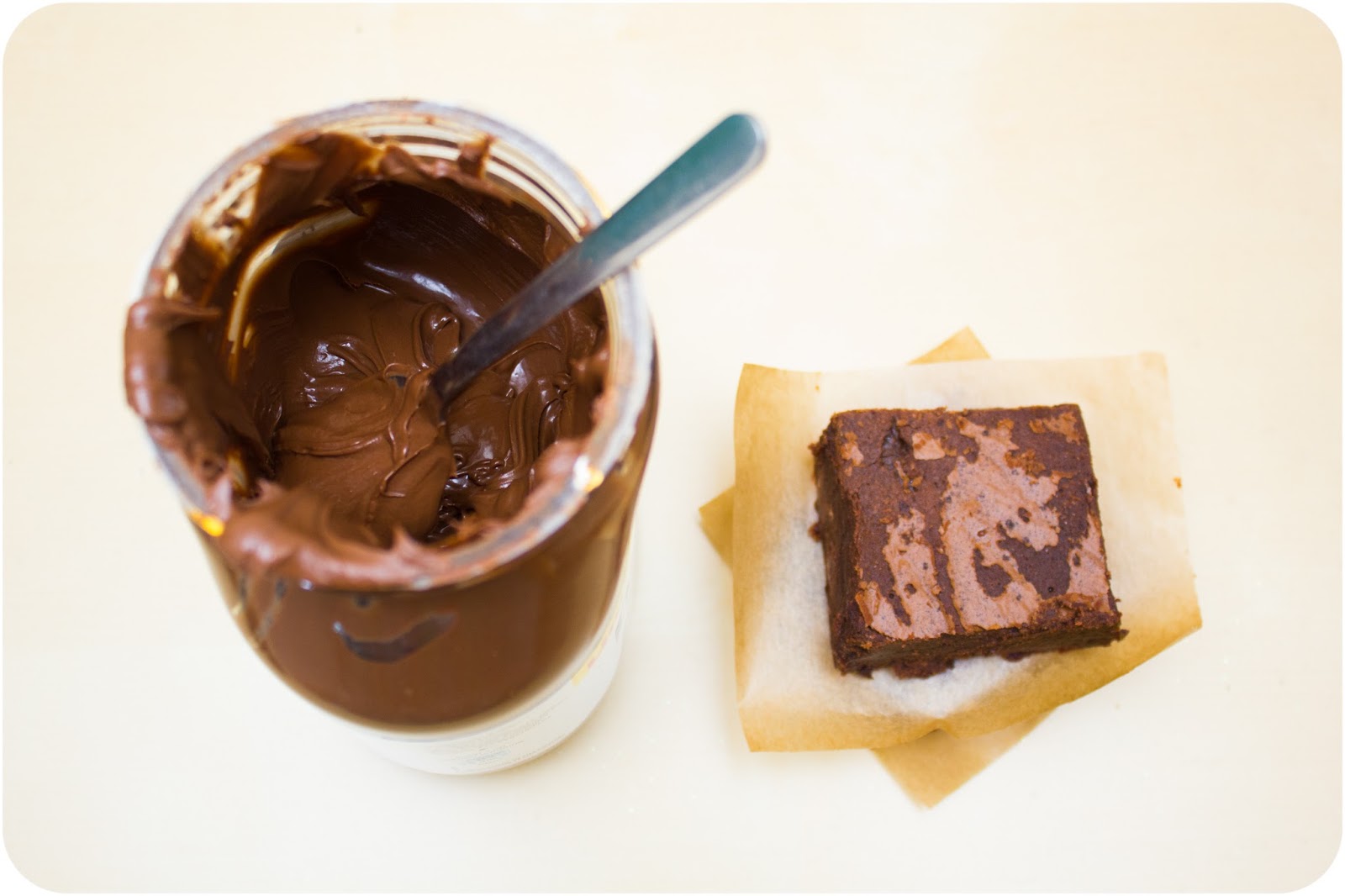 Yes, this is my second post in a row involving Nutella.  No, I'm not sorry! With my latest feelings towards Nutella, don't be surprised if all my future bakes include Nutella somehow!

Just this week my husband said to me that it seemed like Nutella was my latest obsession! and then he commented about how I never just like things...but always get obsessed with something! This seemed like a surprise to him! but I've always been this way...when we started dating it was Gwen Stefani/No Doubt - but soon my Gwen covered walls had to get taken down and replaced by photos of Byron instead! When we got married it was polka dots...so our wedding was polka dot themed - in fact I'm still a polka dot lover! America is an underlying obsession that I don't think will ever go away, as are cupcakes! and in the past few years coconut has dominated my latest baking related obsessions until now... 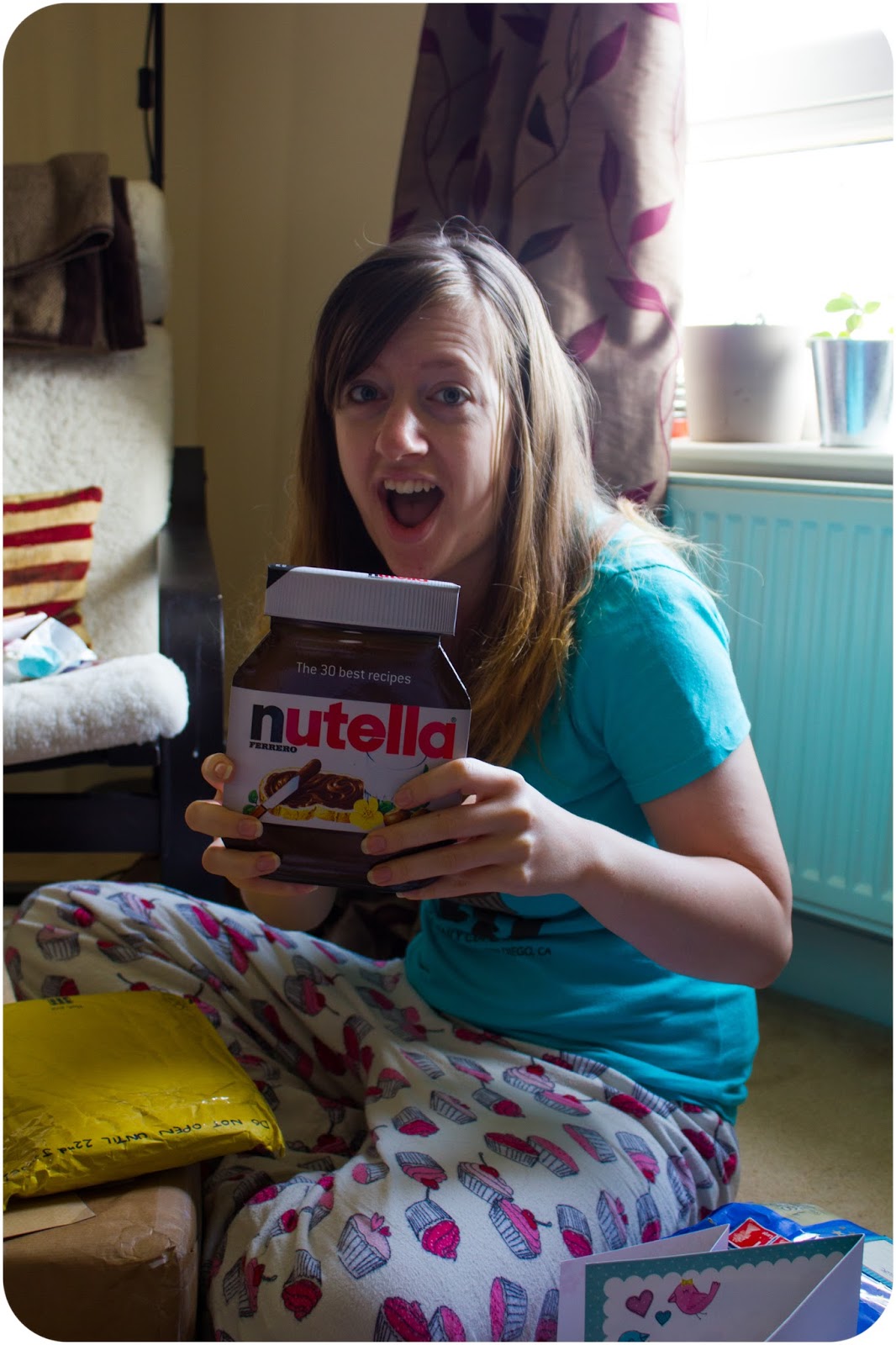 I love nutella so much I have a whole pinterest board dedicated to recipes involving that hazelnutty goodness, and for my birthday last month my friend even managed to find me a Nutella recipe book shaped like a jar of Nutella - how awesome can you get! 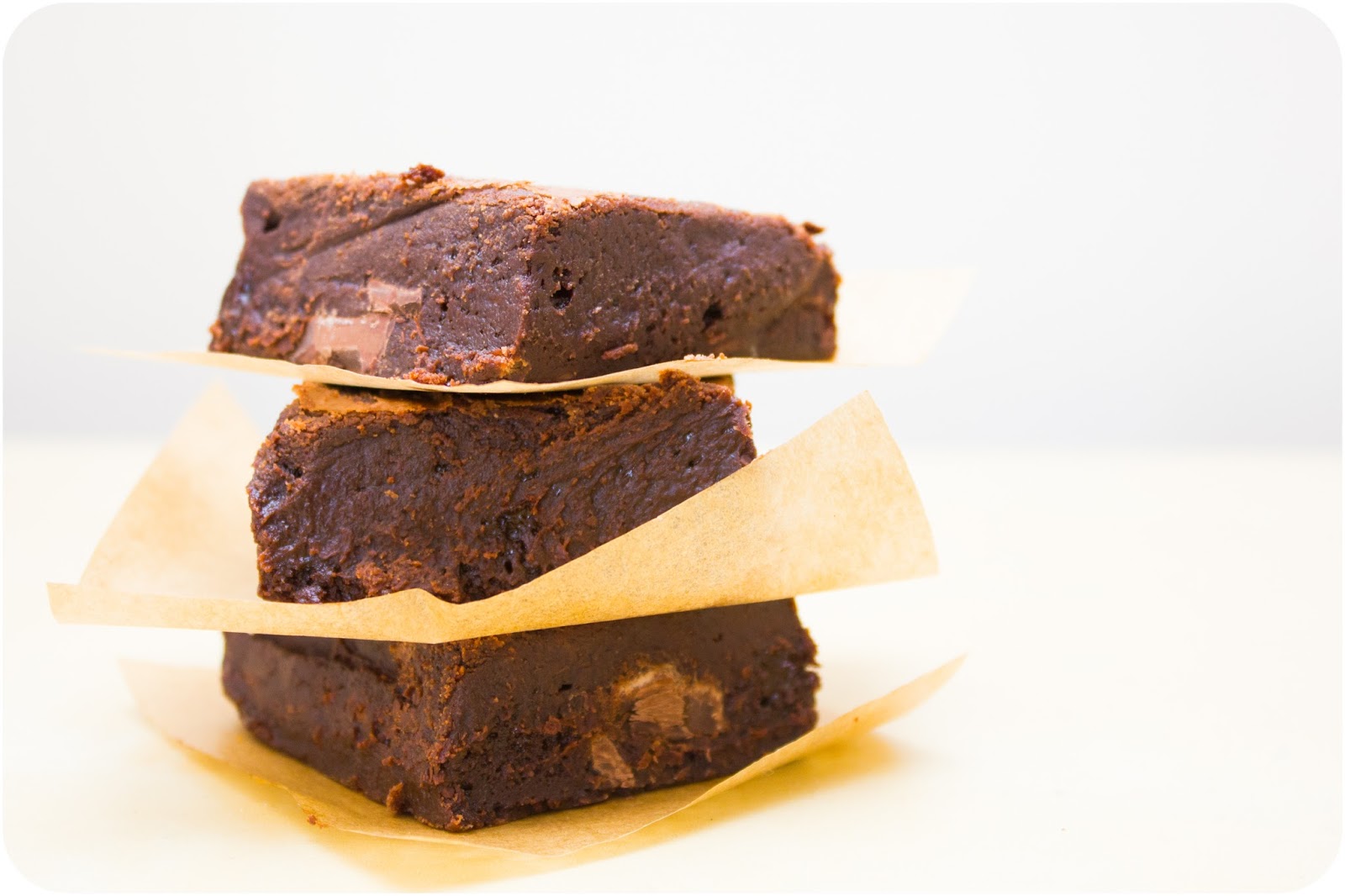 So we were craving something sweet, as always, and our cousin from South Africa was visiting so I gave him a few options of what I could bake up and Nutella Brownies was one of them! He said he had never heard or tasted anything like that before so it was a done deal!

This recipe was one of the 'pinterest' stars of 2013 so I knew it would be great! They are some of the fudgiest and most delicious brownies I have baked in a very long time! As far as Nutella flavour went, I could have definitely done with more but that's why I added some melted Nutella and ice cream when serving and that helped give it additional flavour! I loved the addition of the milk chocolate chunks too, when served warm, each chunk was an oozing pool of chocolate-y goodness!!

Bake these up for some Nutella fans...or brownies lovers - they won't be disappointed! 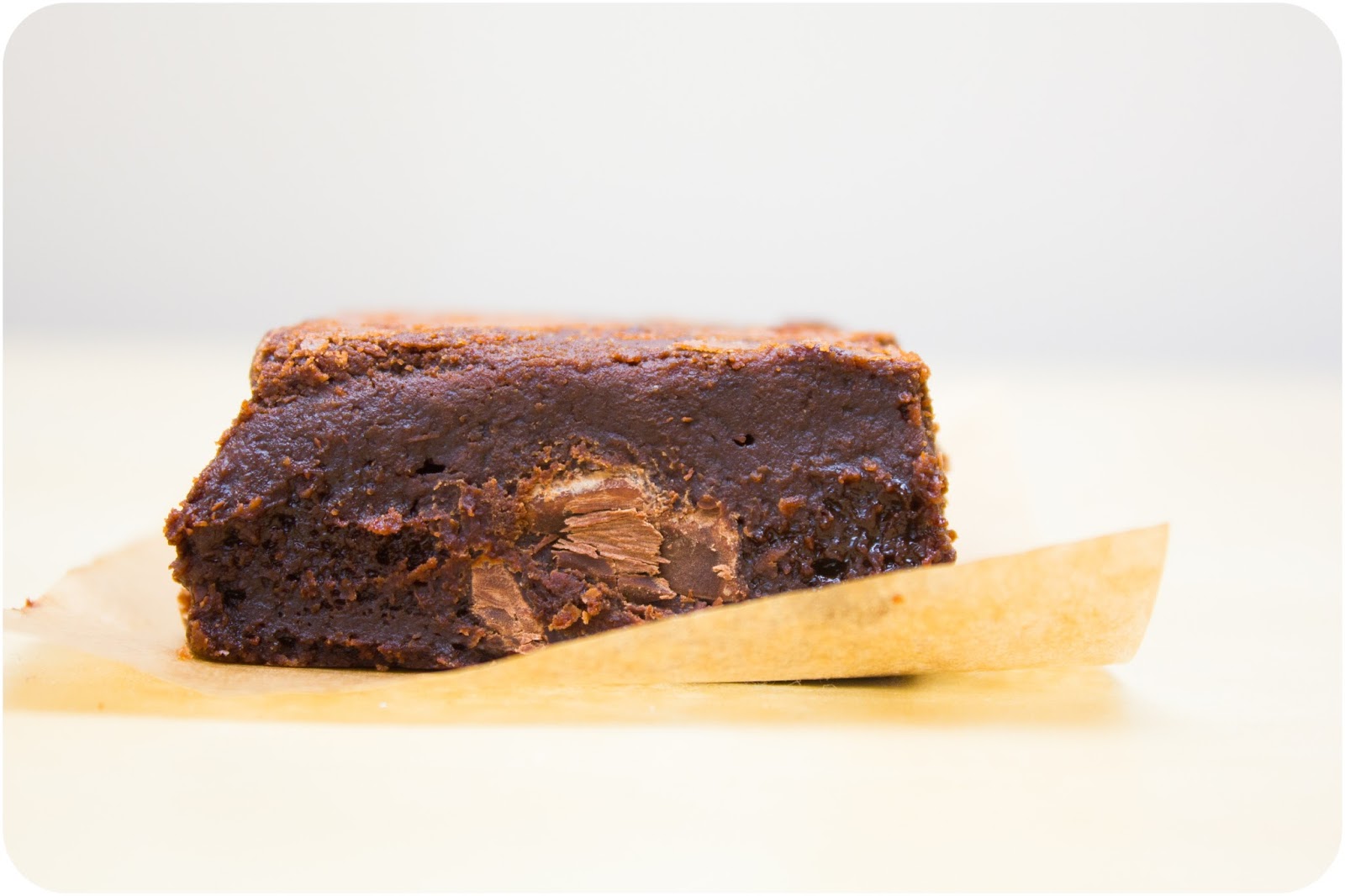 The FUDGIEST Nutella Brownies:
Makes 16
From Buns In My Oven

Preheat the oven to 180 degrees C. Grease a 9x13 baking dish with butter.
In a small saucepan over low heat, melt butter completely.  Stir in sugar and continue cooking for 1-2 minutes, stirring constantly.  Do not allow sugar mixture to boil.
Remove from the heat and stir in the Nutella until well combined.
Pour butter mixture into a large bowl or stand mixer, beat in cocoa powder, eggs, salt, baking powder and vanilla extract.  Mix until combined.
Stir in the flour and milk chocolate chunks until just combined.
Spread into prepare pan, the mixture will be very thick and sticky. Bake for 20 minutes or until a knife inserted comes out with several moist crumbs attached.  I usually transfer my brownie pan with a tea towel underneath straight into the freezer and leave for 15 minutes - this helps it remain super fudgy inside.

We served ours with scoops of vanilla ice cream and lashings of melted Nutella - delish!