A few cupcakes to end National Cupcake Week with...

In the UK it has been National Cupcake Week this past week.  I have been sad to be missing out on it, but mostly sad due to the lack of cupcake baking that has been going on in my life! So I finally rectified that yesterday by making some at an Island BBQ I was attending.  I decided hummingbird (pineapple and banana) would fit in to the tropical theme well! However making them was a whole other story, wow do I miss my KitchenAid! I was on very limited utensils...I had to mix the ingredients in a saucepan! but surprisingly they still turned out rather tasty! and were enjoyed by all. 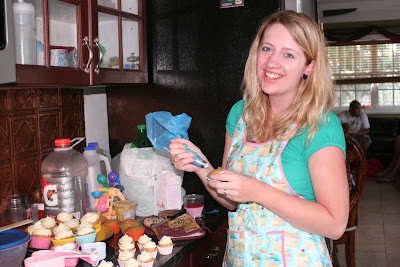 Here I am frosting in action.  Unfortunately I wasn't able to take proper photos because they took so long to make that they flew off the plate before I could even take a photo of the finished item.  So they looked similar to these ones below, but they were just topped with a little chunk of pineapple too. 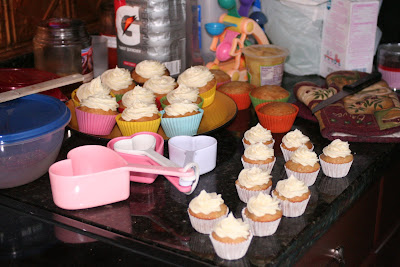 I made some minis for the Kids at the BBQ and the regular sized ones for the adults.  I made them in my silicone baking cups which apparently they don't have here in Turks and Caicos, because my employer's husband threw his cases away and then when he realised he said he had wondered why they seemed so durable!
So this is the start on my new cupcaking life in Turks and Caicos! but I certainly haven't forgotten about the cupcake scene back in the U.K and get regular updates from friends and family to keep me informed about the latest cupcaking news!
I was very excited to hear about The Hummingbird Bakery's new Soda range.  Even more excited that my sister has agreed to trial every single one on my behalf! So I present to you Saturday's offering - the cream soda cupcake: 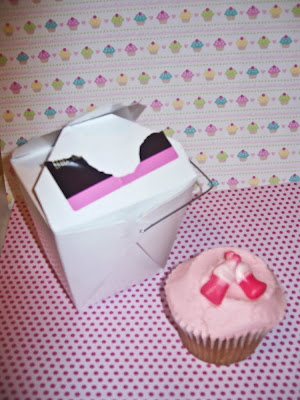 The report from my sister was that sponge was nice and moist and the frosting was really light and fluffy.  It tasted exactly like cream soda and the sweets on top were cute too.  She can't wait to try the rest of the range! and how cute is that little box they give it to you in!
After her visit to Hummingbird on Wardour Street, she went to broadway market in Hackney and stumbled upon the Violet stall.  She said they had cute bunting and all the cakes were really nicely displayed, as you can see below. 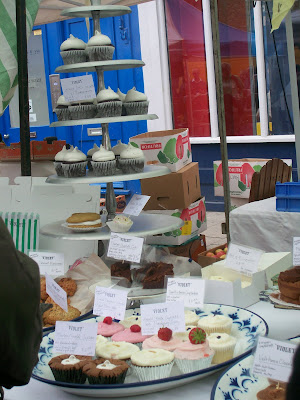 She went with a regular sized coconut cupcake and a mini salted caramel.  Here is her report:
'The salted caramel was delicious (the saltiness taking away the sweetness of the buttercream) and the coconut milk topping was so creamy and both cakes were nice and moist.  It had dessicated coconut on top as well.' 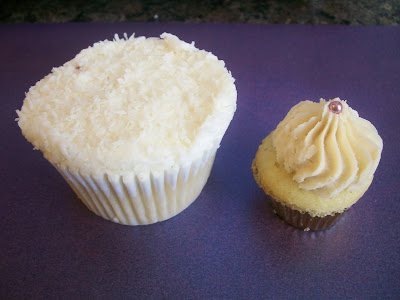 I will have to try and visit Violet for my self one day when I get back over the Atlantic but for now I'm going to see how cupcake baking kicks off over in the Caribbean!
Posted by Cupcake Crazy Gem at 23:58 2 comments:

Apologies and a few cupcake reviews...

Firstly apologies for the lack of cupcake blogging...but there have been bigger things going on right now...bigger than cupcakes I hear you cry? yes indeed.  We have arrived on the wonderful and amazingly beautiful island of Turks and Caicos, where we will be living for the next year (or maybe more!), and we have just been settling in.  If you would like to follow our Island adventures I am running another blog called chilling in the sun where you can catch up on the latest news and photos.  I took the blog's name from this amazing song I fell in love with by the same title, you can listen to it by going here  you just need to scroll down to the bottom of the page where there is a list of songs and Chilling in the Sun by Cray Ewing is the second song down.  Listen to it, relish in the steel drums and love it! It sums up how my life is feeling right now :)

Anyways on to the cupcakes, all is not lost for cupcakes on the Island as I feared it might be.  Our local supermarket which is a sort of upmarket establishment, similar to the likes of whole foods had some Oreo cupcakes for sale the other day in their bakery cabinet that I definitely am going to try out at some point...maybe towards the end of the month once I've been paid! Food prices on the Island are extortionate and whilst I have been reveling in the fact that all my well loved American foods are freely available here they definitely come at a price...a price about 4 times more than what they should be! So whilst I have been standing mouth wide open at the baking aisle and all the delights that are on offer such as shredded coconut, toll house chips, reece's peanut butter chips, betty crocker mixes etc... I can only indulge in some of those when I'm feeling a little richer!

For now, so I don't neglect my blog for too long I will post a few pics of cupcakes that I enjoyed just before I left the UK. 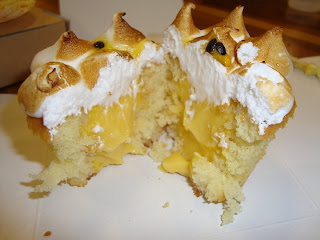 First up, thanks to the joys at still having my passport in my maiden name, I had to take a trip to the Passport Office in London and get a passport done in a day for my travels! The £130 fee was cushioned slightly by the fact that it was a few days into August and this meant I could try Lola's passionfruit flavour of the month! I had visited my sister the Saturday before but it had been the last day in July and we were very disappointed we wouldn't get to try one...so being there 3 days later we were pleased to be able to revisit and it did not disappoint! The cupcake was a lemon-y flavour sponge, bursting with passionfruit curd and topped off with chewy meringue! How can that not make your tastebuds tingle just hearing that description?! I have always been a passionfruit fan...in South Africa you can get amazing passionfruit smoothies that my mom and I used to live off when we visited! so I knew this had the makings for one amazing cupcake! I hope everyone else managed to get their passionfruit fix in August too!! My reliable source in London now tells me their new flavour of the month is peanut butter and jelly! 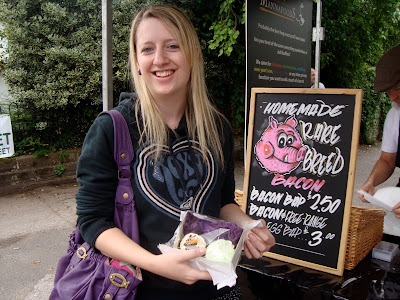 After that I spent a weekend saying goodbye to my parents up in Shropshire.  We went to a nearby village called Tarporley and luckily because it happened to be the first Saturday of the month we caught the local farmer's market which was awesome! Here I am waiting for my 'rare breed' bacon bap, it was delicious! and I am also clutching my cupcakes that I had bought from the stall Truly Cupcake.  We got there fairly late in the day and their selection wasn't great.  They had Red Velvet, some kind of Mocha one and Ginger and Lime & Coconut.  So my mom went for the Ginger and I opted for the Lime & Coconut - always a good combo in my opinion! 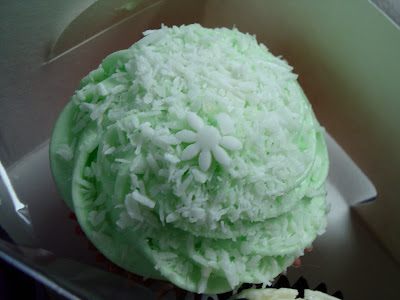 The sponge was light and airy and the frosting was delicious with just the right amount of zing.  The ginger cupcake on the other hand was a bit overbearing on the ginger front and we weren't so keen but I would be keen to try more of their flavours.  If you ever happen to be taking a drive through Tarporley on the first of the month get their early to get the cream of the crop! 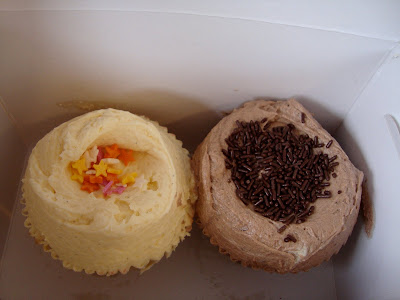 It was a bit of a month long of farewells really! but at the very end just a couple of days before we flew out I went back to my hometown of Harpenden for a dinner with my school friends.  For a while now I have been desperate to try Yummy Mummy Cupcakes, but everytime I go back for a friends birthday or just for a visit it always happens in the evening so I have missed them everytime! They are a fairly new establishment, but this time I got to Harpenden at around 5pm and headed straight for them hoping they were still open.  Not only were they still open but a fresh batch of vanilla and chocolate cupcakes had just come out the oven as I walked in.  So I waited a few minutes for them to cool and watched the lady ice them right in front of me so I was excited about them being so fresh! I got them to go and met my sister and we found a nice park bench to enjoy them.  The cakes were very yummy but we felt the frosting was just a bit too buttery and left something to be desired, so they were a little bit of a letdown after waiting so long to try them!

So there's my little last stop cupcake UK round up! From now on I hope to be trying some truly Caribbean cupcakes and writing about them on here! and once I start to get used to the supermarket prices and stop converting to pounds all the time and comparing what it would cost back home perhaps I can start getting some cupcake baking on the go as well!
Posted by Cupcake Crazy Gem at 01:03 7 comments: