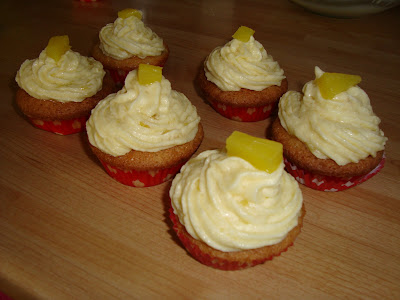 I made hummingbird cupcakes to take to School yesterday for birthday fun. The cupcakes were soooo easy to make, and turned out brilliantly. The icing was not so easy...and this is where I always seem to fall down! I spent missions trying to make my cream cheese frosting thick ..thick enough to ice a cupcake with and it just wasn't happening!!! I turned to google in my very late hour of need and found out that 1. to make cream cheese frosting thick you need the butter to be cold not room temp like i had done and 2. you need to not overbeat the cream cheese to make it too soft - i did this too! so I didn't stand a chance, I kept adding more icing sugar to hope it would magically thicken, I put it in the fridge overnight - it didn't work! so it was a very early start on my birthday morning to go to co-op and buy some more icing sugar (since i'd used up 2 boxes the night before!) and I made some banana buttercream frosting instead which I was pretty pleased with -they went down well so I was pleased!

Next on to my amazing array of cupcake presents I received..the pictures speak for themselves 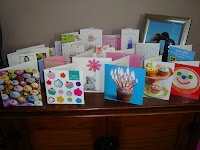 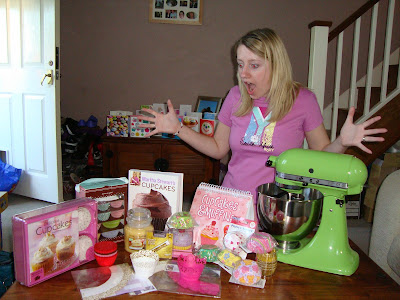 And yes your eyes are not deceiving you....I GOT A KITCHENAID!!!! it was the best most fantastic birthday surprise ever!!! A while ago I had sent my Mom an amazon wish list which included the cheapest mixer I could find online, I had picked that one as all the reviews of it on amazon had been from people who had been coveting a kitchenaid but settled for that one instead and so I was secretly hoping I might get it but it was pretty expensive so when I opened 3 parcels already from my Mom and sisters of all the cupcake related goodies shown in the pic I was already more than happy!!! and then I got home from work tonight and there was a big box left...well i opened it up and i just couldn't believe my eyes! I wish I'd captured a picture of that exact moment because I was in shock...I ran outside to Byron who was starting up the BBQ and was like 'ahhhh you'll never guess what i got'! so yes i got a kitchen aid - My Mom is the best Mom in the whole world! and what a fantastic birthday it's been! Here it is up close ..check the shininess!!! 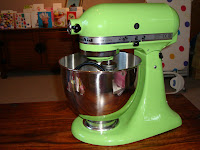 Posted by Cupcake Crazy Gem at 21:17 No comments:

Back to butter cupcake at Westfield 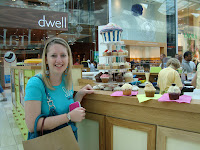 So Mom, Dad, Alli and Mar came down for the weekend 2 weekends ago and we headed to Westfield..where else!! and you know what I was most excited about - the cupcakes!!! I love this cupcake tower they have here with the giant cupcake on the top!
My one was the oreo cupcake on the far right, then By's was peanut butter next to mine and Mar had coconut...it was very tasty..and very messy to eat - it just wasn't possible to be graceful! I was dropping crumbs everywhere and was getting a few strange looks too! but it was worth it!
Posted by Cupcake Crazy Gem at 21:12 No comments: