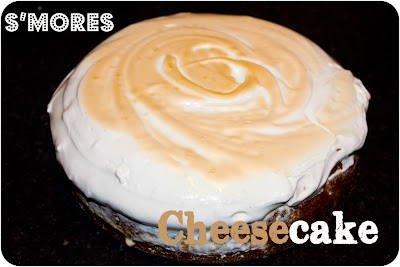 You may be thinking that for a person who spent a whole 5 months of her life baking and developing cheesecakes for The English Cheesecake Company last year, that my blog is severely lacking in cheesecake recipes...and you'd be right!

However, unfortunately I can't share any of those recipes with you since they are top secret! and one day down the line may be used by the company I was working for.  So I can develop my own recipes at home to share with you...but, my husband is not a cheesecake fan! and when you're making a full sized cheesecake and only one person is going to eat it - that's a problem! you can bet I would get crazy fat in no time at all.

So bear with me, I'm trying as much as I can to ease cheesecake into our household gently! We had some Americans over for dinner and I knew we were going to rustle up some slow cooker pulled pork burgers with creamy corn and I wanted a suitably American dessert to finish off with.  I have had this recipe bookmarked for aaaages so I was more than excited to finally get around to using it! 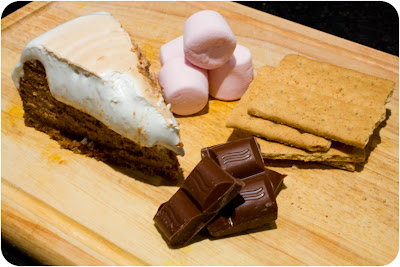 So what constitutes a s'mores cheesecake? a graham cracker base, which delighted the Americans we served it to because you can't actually buy graham crackers in regular supermarkets here! A super smooth and creamy milk chocolate baked filling topped with some ooey gooey toasted marshmallow.

One of our guests declared it the best cake ever, and for me it was definitely the best cheesecake I've tasted in a long time.

You may notice it's not as aesthetically pleasing as it could have been, check out Tracey's beautiful version to see how it could look! One of the steps for the marshmallow topping is to use a hand held electric beater to whisk it whilst it is simmering in a pan above water.  I don't have a hand held beater and so I had to resort to doing it by hand...do you know how hard it is to whip marshmallow meringue into stiff peaks with only your muscles (or lack thereof) for power? Well, you can see how hard it is from the picture below because mine probably wasn't whipped as long as it should have been and so it wasn't as stiff as it could have been but it still tasted just as delicious! I also grilled mine, as I don't have a blowtorch and you can't get as nice a toasted effect but you definitely get the toasted taste coming through so it is worth doing it! Just keep a close eye on it, it gets toasty super quick! 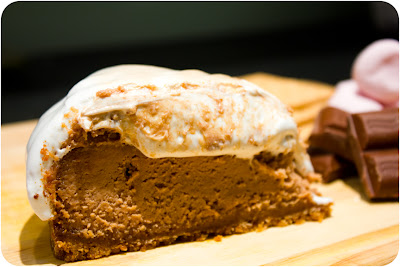 Crust1 1/2 cups graham cracker crumbs (about 9-10 whole crackers)3 tablespoons sugar6 tablespoons unsalted butter, melted Filling9 oz milk chocolate, chopped2 8-oz packages cream cheese, at room temperature3/4 cup sugar1/8 teaspoon salt3/4 cup heavy cream, at room temperature3 large egg, at room temperature Topping1 cup sugar2 large egg whites3 tablespoons water1 teaspoon cream of tartar1/8 teaspoon salt12 large marshmallows, cut into quarters with wet kitchen scissors1/2 teaspoon vanilla extractTo make the crust:  Preheat oven to 350 F.  Spray a 9-inch springform pan with nonstick cooking spray.  In a medium bowl, stir together the graham cracker crumbs and sugar.  Pour the melted butter over the mixture and stir until the crumbs are evenly moistened.  Press into an even layer in the bottom of the prepared springform pan.  Bake for 12 minutes, or until set.  Transfer the pan to a wire rack and cool to room temperature.  Reduce oven temperature to 325 F.To make the filling:  Add the chocolate to a microwave-safe bowl and heat in 30 second intervals at 50% power, stirring in between each interval, until the chocolate is melted and smooth.  Cool until just barely lukewarm, stirring occasionally.Combine the cream cheese, sugar, and salt in the bowl of your food processor and pulse until smooth. With the machine running, pour the heavy cream through feed tube and process just until blended. Again, with the machine running, add the melted chocolate and then the eggs, one at a time, blending and scraping down the sides of the bowl after each addition until the mixture is smooth.  Pour the batter over the cooled crust. Bake for about 55 minutes, or until the outer edge is slightly puffed and the center is barely set (the center will jiggle slightly when the pan is gently shaken).  Transfer the pan to a wire rack.  Run a small sharp knife around the cake to loosen it from the pan.  Let cool slightly then refrigerate for at least 8 hours.  (I left mine uncovered in the fridge until it was cold, then used plastic wrap to cover the pan.) To make the topping:  In a large metal bowl (I used the bowl for my stand mixer), combine the sugar, egg whites, water, cream of tartar and salt.  Set the bowl over a pan of simmering water and whisk constantly until the sugar dissolves and the mixture feels hot to the touch, about 3 minutes.  Remove the bowl from the pan and add the marshmallows; let stand for a few minutes until the marshmallows soften.  Place the bowl back over the pan of simmering water and beat the topping with a hand mixer for 4-5 minutes, or until stiff, shiny peaks form.  Beat in the vanilla.Let the topping cool just slightly (don't wait too long or it'll set and you won't be able to spread it).  Meanwhile, remove the sides of the pan from the cheesecake.  Transfer the topping onto the cheesecake; use a spatula to spread it to the edges.  Let stand for about 15 minutes, or until set.  Use a kitchen torch to toast the topping lightly.  (You could also do this under your broiler but keep a VERY close eye on it, it'll go from brown to burnt quickly.)  Transfer the cheesecake to the fridge and chill well before serving.

So that was my s'mores cheesecake but you're really here for the GIVEAWAY right? 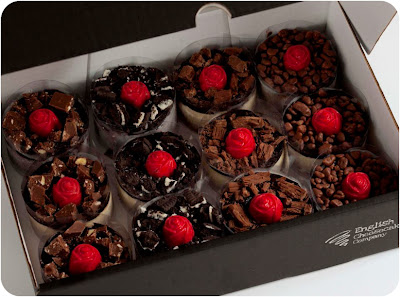 Well since I know so many of my followers are cheesecake lovers! and since Valentine's day is right around the corner - how would you like to win some of these delicious and oh so cute mini Valentine's Cheesecakes courtesy of The English Cheesecake Company! They would make the perfect gift for that loved one in your life...or even the perfect gift if you wanted to treat yourself, shh I won't tell!

When the postman arrived on my doorstep this morning bearing these cheesecake goodies it was more than a little exciting! and of course I had to taste test them to make sure they were up to scratch.  Let's have a run down of the flavours: 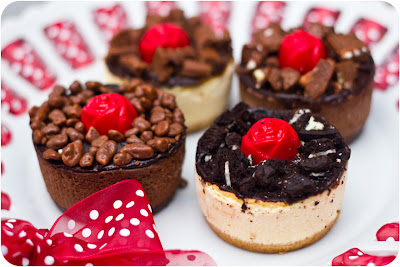 You get 4 varieties (3 of each in the box).  First up is a baked vanilla cheesecake on a crunchy biscuit base, topped with a dark chocolate fudge sauce and crushed up Oreos and an edible chocolate rose in the middle. 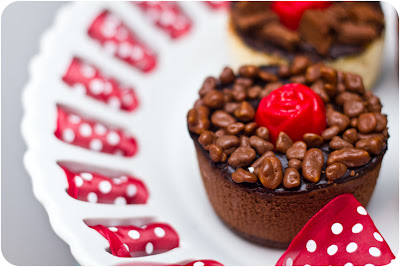 Next is a baked chocolate cheesecake on a chocolate biscuit base, topped with the fudge sauce and this time little bits of chocolate covered honeycomb and an edible chocolate rose. 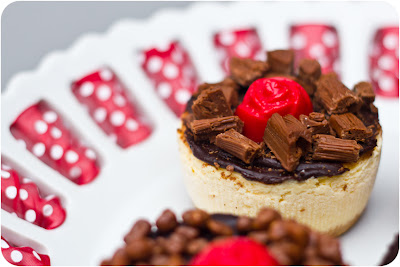 The second baked vanilla cheesecake is topped with the fudge sauce and broken up pieces of chocolate flake along with the edible chocolate rose. 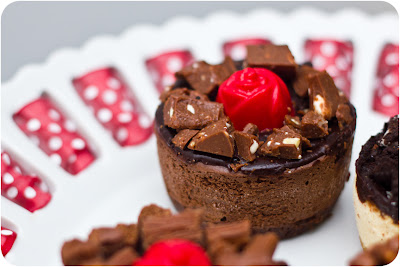 The final one to complete the lineup was my absolute favourite because Toblerone has got to be one of my favourite chocolates ever! So a baked chocolate cheesecake, on a chocolate biscuit base covered in fudge and big chunks of Toblerone is my idea of heaven!

Words can't describe how delicious these cheesecakes truly were.  Sometimes for me I find cheesecake a bit boring and plain but these were anything but! I love the addition of the sticky fudge sauce which really adds something special and I love how chunky all the toppings are!

So you want to try them too don't you?

To be entered into this competition for a chance to win these delights you just need to do one thing:
1. Like the English Cheesecake Company on facebook  and leave me a comment on this post telling me that you have done so.

If you'd like to increase your chances you can have a bonus entry for:
2. Liking my brand new facebook page, again leave me a separate comment telling me you have done so.

If you really really want these cheesecakes you can have a 3rd entry by:
3. Retweeting this giveaway on Twitter, and then comment and let me know.

Each individual comment acts as a new entry so if you do all 3 things be sure to leave 3 comments.

Okay - are we all up to speed? You have 3 chances to win and your entries are valid up until Midnight on Wednesday 8th February.  The winner will be announced on Thursday 9th February, to ensure plenty of time for delivery for Valentine's Day.  Unfortunately this is open to UK residents only since those cheesecakes will not make it to you in an edible state if you live anywhere else!