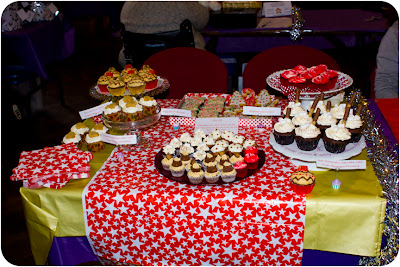 Yesterday was Bangor Uni's Christmas Market, which was run by the students.  We got an email a while back asking if anyone was interested in running a stall so I jumped at the chance, not realising the market was the day after I had an essay due in! In hindsight, it wasn't the best timing! but it turned out pretty well in the end considering how little sleep I got (please excuse the bad pictures - the lighting in the hall was terrible!) Also, I am not claiming responsibility for the purple tablecloth or the tinsel - that was all down to the University setting up! but I must thank my mom for sending me the awesome gold and starry tablecloth and serviettes to make my stall a little bit prettier! Most people didn't worry with their stalls but I like things to look fancy!

Here's a little run down of everything I made, recipes will be following later in the week... 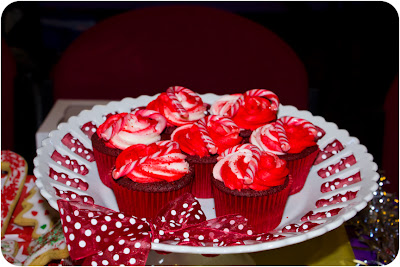 First up, I made some red velvet cupcakes with peppermint frosting.  I made the frosting two tone to co-ordinate with the candy cane toppers. 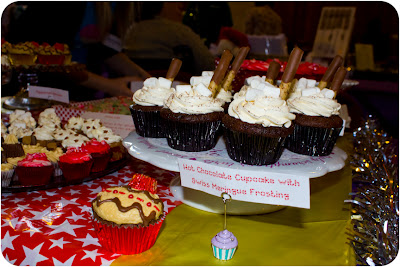 The most popular of the day had to be these hot chocolate cupcakes with swiss meringue buttercream.  If you've never had swiss meringue buttercream before (no one seemed to know what it was who visited my stall!) it's a very silky light frosting made from a combination of heated egg whites, butter and sugar.  It's less sweet then regular buttercream and was the perfect accompaniment to the rich chocolate cupcake.  It also pipes on like a dream and as it's so light it helped to create the whipped cream look I was going for.  I dusted some cocoa, sprinkled some marshmallows on and dipped a wafer in melted chocolate just to finish them off! 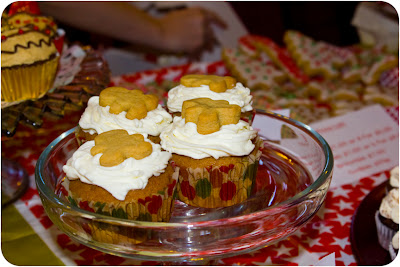 One of my favourite combos, especially for Christmas is gingerbread with cream cheese frosting.  I made these cupcakes for the first time two years ago and then last year in the Caribbean I made them with my sister too, so they're definitely becoming a bit of a tradition! 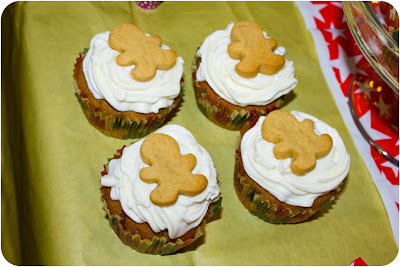 Homemade gingerbread men as toppers always go down well.  I'm really not a fan of fondant decorations and I believe cupcake toppings should always look good and be delicious. 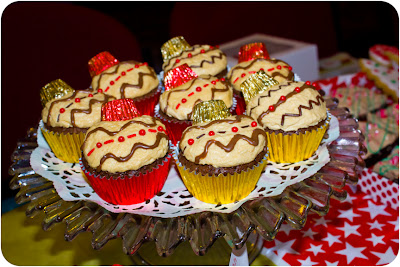 My favourite cupcakes of the day were these brownie cupcakes with peanut butter frosting.  They are all round a delicious flavour combo but also I was excited to make them so I could turn them into baubles! I ordered the mini Reese's peanut butter cups from one of my favourite websites - The Stateside Candy Co, and I knew as soon as I saw them that they would be perfect for looking like a bauble! 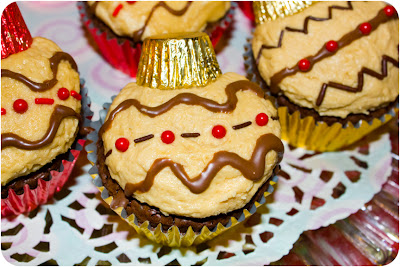 So I tried my best to mound my frosting into a circular shape and then did a few zig zag patterns over the frosting with melted chocolate.  I put the reese's cup at the top to act as the hanging part of the bauble.  They were time consuming but I think they were worth the effort! As a random side note, I discovered last year whilst in the Caribbean from my American colleagues that they didn't know what a bauble was! Apparently in America they are known simply as Christmas Ornaments so for all my American followers these were my 'Christmas Ornament' cupcakes! 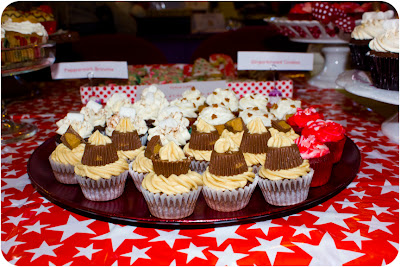 I also baked 12 mini's of each flavour because these bite sized treats are always popular. 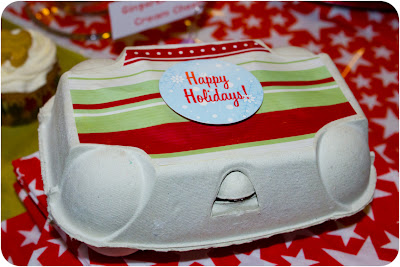 Did you know egg boxes are made for putting mini's in? I like to give them aways as presents in these by decorating the boxes and tying ribbon around them.  I decorated these with some striped Christmas paper and a gift tag... 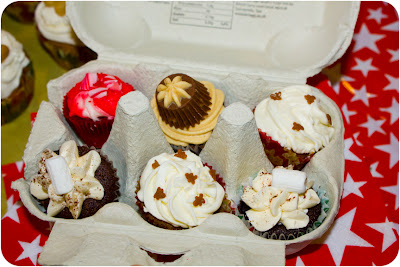 and put a random assortment of mini's inside - people fell in love with these and all the boxes were snapped up in the first 20 minutes! I must remember to make more for next time around... 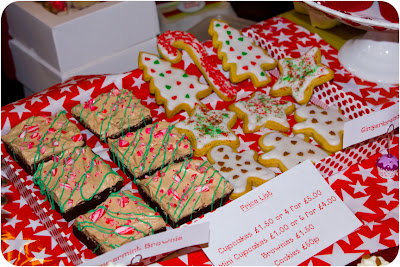 I finished with a few treats for those out there who might not be as cupcake crazy as I am! I made some Christmas shaped gingerbread cookies, and these peppermint brownies.  They were chocolate brownies frosted with chocolate-peppermint swiss meringue buttercream and finished off with some chopped up candy canes and a drizzle of mint chocolate .  I made these in the last hour before we had to leave the house as an afterthought, but I was glad I did as they got some of the best compliments of the day!

I'm off to do my 25th load of washing up...no really! Baking for the masses without a dishwasher is no fun at all!
Posted by Cupcake Crazy Gem at 16:15