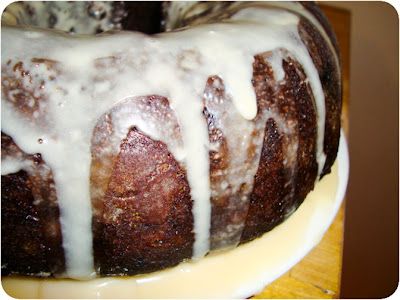 These pictures were not taken on my SLR which made me not even want to do this post! nor were any pretty cake stands involved and Bundts deserve to be displayed on beautiful cake stands! and yes, I'm pretty sure you can see a tube of facewash and a bag of coppers in one of the pictures - whoops! but you see I did decide to blog about in the end...and the reason is because it was the tastiest most delicious thing ever and I could not wait 10 seconds longer to take some facewash out of the background of the shot because my tastedbuds could not hang on any longer! the smell of baked root beer goodness was overwhelming and all blogging sense went out the window!!

So without further ado I present to you the Root Beer Bundt cake.  For my birthday I received a bundt cake tin.  It was the first bundt tin I've ever had and so I spent weeks deciding what type of bundt cake to make because it's maiden voyage had to be a special and delicious one! I had settled on an Oreo one but then in last month's Food Network Magazine we came across this recipe and there was no question in my mind...other than how soon can I get my hands on some root beer! so after work that night we popped to Outsider Tart to pick up a bottle and that settled it! 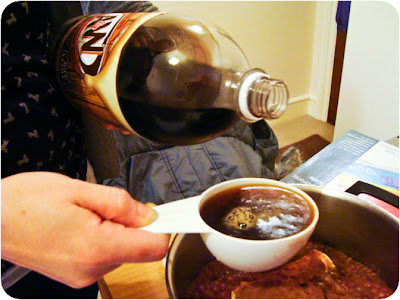 It was a good thing we bought such a large bottle because there was definitely more going into our mouths than into the bowl...and that says alot, because this recipe is packed with root beer! Once upon a time I made some root beer float cupcakes, at the time I fell in love with the vanilla bean frosting that tasted just like a melted dollop of ice cream but I remember wishing the root beer taste in the cupcake had been stronger.  I certainly didn't have that problem this time around.  There is root beer in the cake mix, when the cake comes out the oven you poke it and pour on yet more root beer and soak the cake completely in pure A&W heaven. Once you've done that you even add some to the glaze and then just for fun...and extreme tastiness we threw an extra teaspoon or root beer extract in as well! 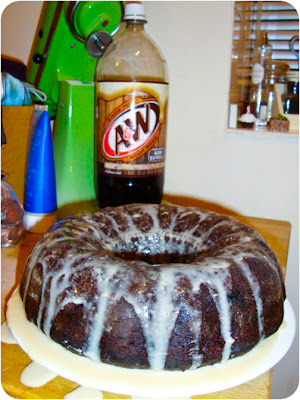 Preheat the oven to 160 degrees C.

Butter and flour a 12-cup Bundt pan; tap out the excess flour.

Heat 2 cups root beer, the cocoa powder, chocolate and 1 stick butter in a large saucepan over medium heat until the butter melts. Add the granulated and brown sugars and whisk until dissolved. Remove from the heat and let cool.

Combine 2 cups flour, the bicarbonate of soda, allspice and 1 teaspoon salt in a bowl. Whisk the eggs into the root beer mixture, then gently fold in the dry ingredients (the batter will be slightly lumpy).

Pour the batter into the prepared pan and bake until a toothpick inserted into the cake comes out clean, 55 minutes to 1 hour, rotating the pan halfway through. Transfer to a rack. Gently poke the cake all over with a skewer and pour 1/4 cup root beer over the cake; let cool in the pan for 20 minutes, then invert the cake onto a serving plate and let cool completely.

Meanwhile, make the glaze: Whisk the remaining 1/4 cup root beer, a pinch of salt, the icing sugar and vanilla in a bowl until smooth. Drizzle over the cake.