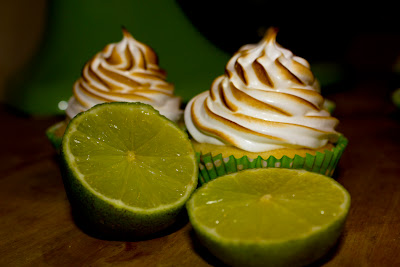 So hopefully this post will make up for the lack of baking I've been putting on the blog recently!
First up were my moms birthday cupcakes.  It was quite a funny story, I'd been planning these for quite a while.  Last year on her birthday I made her Toblerone cupcakes and for Mother's Day I made her Lime & Coconut cupcakes, two of her favourite flavour combos, so I was struggling to come up with something new that she would find amazing this time around when suddenly it struck me - Key Lime Pie! Mom is a huge fan of Key Lime Pie and i just knew they would turn out great in cupcake form too so I was pretty excited to make them.

Imagine my disappointment when she called early on in the week to tell me I wasn't allowed to bring any baked goods home this weekend because she was on a 'serious diet'.  So there went that plan, until in a later phone call I mentioned she was going to be missing out on some Key Lime Pie cupcakes and she promptly told me she could bend the rules for those!!

Whoops...so the rules were definitely bent but all the treats were thoroughly enjoyed nonetheless! 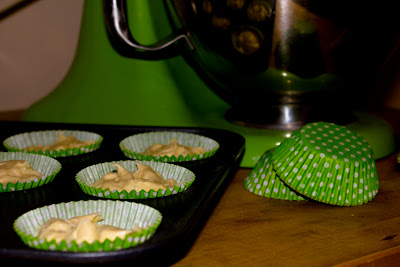 Usually I don't like to bake with 'fairy cake' cases and prefer to only use proper cupcake size cases, however my love of colour co-ordination won in this decision so I opted for 'lime' green cases to match the Key Lime cupcakes. 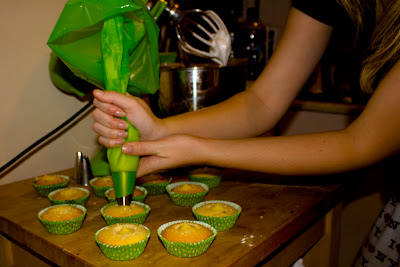 I filled these with a delicious home made Key Lime filling, and the colour co-ordination fun didn't stop there...check out my 'lime' piping bag too! 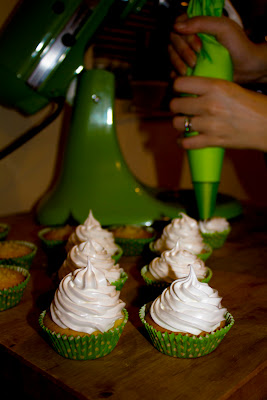 They were then topped with some super glossy meringue frosting that had just a hint of Key Lime juice in to jazz it up...and then the fun began...

I have never used a blow torch before.  Personally I prefer grilling my meringue topped cupcakes so that the meringue is quite crunchy but I feel the blow torch effect makes them more aesthetically pleasing! So I decided to give it a go... 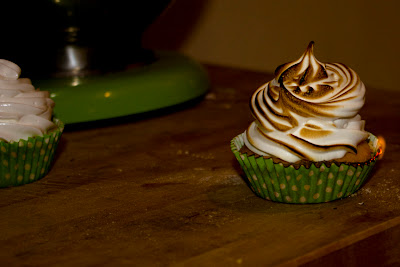 This picture is to show you not everything always goes to plan! I decided to test on my 'reject' cupcake that had not been frosted so well and I'm glad I did because as you can see I set fire to it! 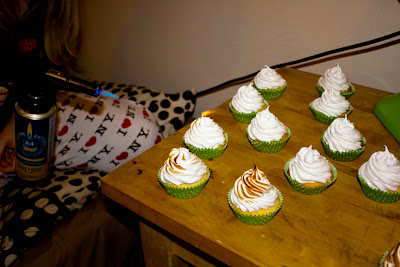 So next time around, I moved my blow torch a bit further back and managed not to set any more cupcake liners of fire, although the tip of the meringue just caught - it kind of looks like a candle!! but as you can see from my pic at the top of this post it all turned out okay in the end! and yes I bake in my 'I heart NY' pj's, don't you just love them!

If you want to bake up these delicious cupcakes too then here is the recipe, I adapted it slightly from here...it was the first time I had ever used icing sugar in the cupcake batter as opposed to the frosting but it helped to give it a lovely light and fluffy texture so I was a fan!