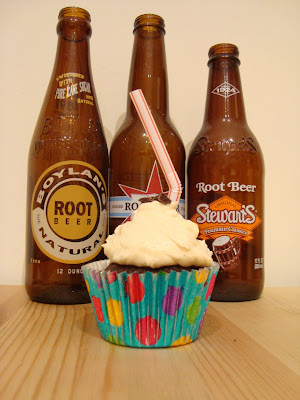 Two posts in one day! Aren't you the lucky ones! I've been wanting to make Root Beer cupcakes for aaaaaages! and decided it was finally time! plus I knew if I left that little can of A&W in my cupboard for any longer I would lose all will power and drink it.

The recipe I used was actually for a root beer bundt cake but I just made it in cupcake cases instead (that were a gift from a lovely cupcake loving friend!)  The recipe they had used called for Root Beer chocolate fudge frosting which did look amazing but I was in the mood for more of a 'Root Beer Float' and so I opted for vanilla frosting.  In the picture above I had used an ice cream scoop to dollop the frosting on top to try and make it look more authentic! I even ordered some little Root Beer barrel candy's from American Ebay for the occasion, and I crushed these up and sprinkled them on top. For the mini ones I made I decided to leave the complete barrel on top, aren't they cute! 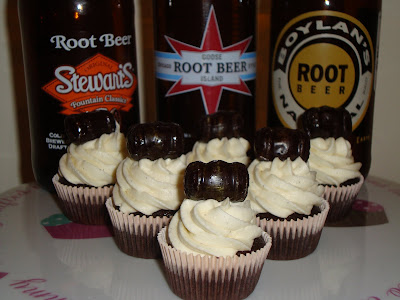 I need you to know that these cupcakes weren't just good, they weren't even very good, they were absolutely fantastically amazing!!! Seriously, I can't remember the last time I ate something so delicious! and there's a secret ingredient that made all this happen...not the Root Beer, although that is obviously one of the key players that makes it so tasty, but oh no there's something far more special but I can't share it with you just yet. 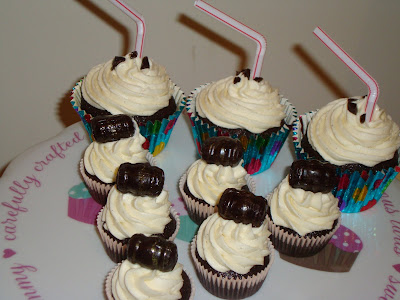 I hate to keep you in suspense, but it will have to wait until after Monday, as I plan to use it for my Iron Cupcake entry! and I can't be sure who is reading so all will be revealed next week! For now I leave you with these pictures...drool at your discretion 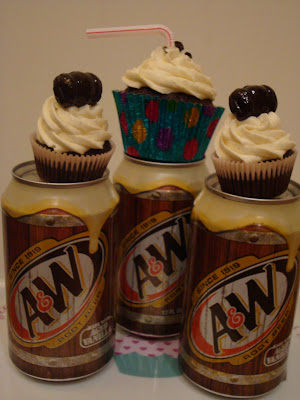 Preheat the oven to 180 degrees C.

In a small saucepan, heat the root beer, cocoa powder, and butter over medium heat until the butter is melted. Add the sugars and whisk until dissolved. Remove from heat and let cool.

Pour the batter into the cupcake liners and bake for 20-25 minutes, rotating the pan halfway through the baking time, until a small knife (or toothpick) comes out clean.

Now the surprise is over! here is what I used for the frosting!!

Mix together half the sugar and butter until they are blended and creamy.  Add the remaining sugar, I divide it in half so as not to have an icing sugar explosion. Add vanilla bean paste and milk and continue to beat for another minute.  If desired, add more vanilla bean paste to taste, or more icing sugar to make it stiffer.
Posted by Cupcake Crazy Gem at 23:57