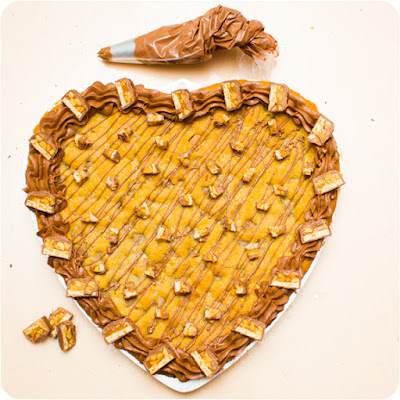 It has been well documented on this blog that my husband loves cookies! I always want to bake him extravagant layer cakes when his birthday rolls around but he always requests the humble cookie instead! To sneakily do both I baked him up the cookie dough layer cake masterpiece back in 2012 but ever since I have just stuck to giant cookies…because if he wants a cookie, then I'll give him a cookie, but it will have to be a super size one! 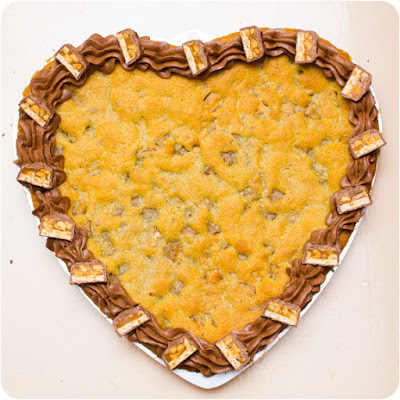 He loves snickers and I'd already made him a Toblerone one last year that never got blogged and a triple chocolate peanut butter one for Valentine's so I decided a snickers one would be a tasty birthday treat.  It is a lovely fail safe cookie recipe that I always use as my base and then you can just throw whatever mix ins you like in there.  If you were partial to caramel then I reckon some caramel swirled through or drizzled on top would be extra delicious but we're not really caramel fans over here so I opted just to keep it simple... 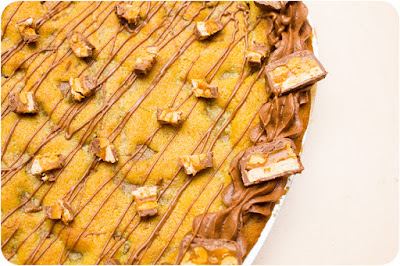 and finished off with a swirly wave of rich chocolate frosting and larger snickers bits!

The birthday boy loved it! so much so, that when some friends popped round unexpectedly later that evening and I asked him on the sly if he wanted to serve some of his birthday cookie to them he declined! apparently it was too good for sharing! 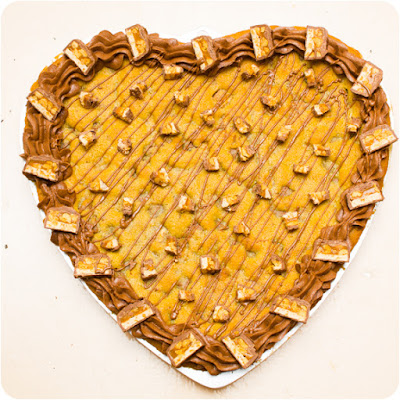 Preheat oven to 180 degrees C.  Grease large cookie tray with butter.
In a medium bowl, whisk together the flour, cornflour, bicarbonate of soda and salt.
In an electric mixer, beat the butter and both sugars together until pale and fluffy.  Stir in eggs one at a time, mixing after each addition.  Add vanilla.  With mixer on low speed, slowly add the dry ingredients and mix until combined.  Add chopped snickers and chocolate chunks and mix in with a spatula until incorporated.

Break dough into four portions and drop into four corners of the tray.  Using your hands spread the dough out until it covers all of the tray and is relatively smooth on top.  Bake for 10-12 minutes until edges are lightly golden.  Remove from oven and allow to cool for 20 minutes.

Melt 1/4 cup chocolate in a small bowl in the microwave in two 30 second intervals.  Once melted, allow to cool for a few minutes and transfer into a piping bag.   Drizzle over the cookie diagonally.  Chop one and a half snickers bars into slices, and chop the other half into tiny cubes.  Throw the cubes across the cookie on top of the drizzle.

Sift the cocoa powder and icing sugar together in a mixing bowl.
Add the butter and beat on low to incorporate the ingredients and then turn up to high and beat for 4-5 minutes until fluffy.  Add the milk, half a tablespoon at a time until desired consistency is reached.  Stir in the vanilla at the end.
Transfer to a piping bag and pipe frosting around the edge of the cookie.

Use the snickers slices you chopped up previously and place them flat down on top of the frosting, one after each swirl of frosting.

Eat and enjoy!
Posted by Cupcake Crazy Gem at 17:20