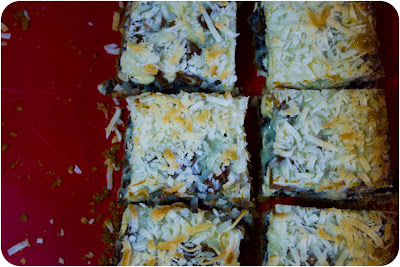 I'm mourning the loss of a great set of photographs! I made some coconut overload magic bars a few months back, and took some much prettier photos than these.  Unfortunately we've just recently started using lightroom on both our macbooks, which was my first mistake! So when I was clearing room on the camera one day I saw the coconut magic bars weren't on my husbands macbook I assumed they were on mine.  I pressed that format button and cleared the whole sd card.  I then grabbed by macbook and opened up lightroom only to scroll to the end of the photos with no coconut bars in sight!!

It was a heartbreaking moment! The magic bars had long been eaten! The silver lining on my cloud was that they were so amazingly delicious I knew it wouldn't be long before I whipped up another batch!

This time around though, I was in a massive hurry and well these pictures reflect that! Booo to bad photos, but these treats are just too good not to share! 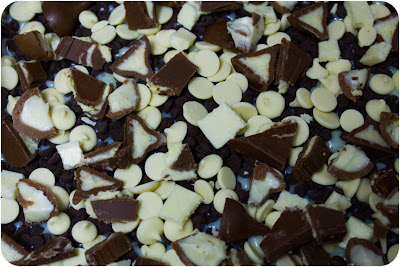 I have a long standing love affair with coconut, of which I'm sure you are all aware! I also have developed a massive love for magic bars in this past year.  They are probably the bake that has frequented my kitchen most since moving to Canada.  I'm blaming it on the fact you can buy boxes of pre crushed graham cracker crumbs here, which makes throwing these magic bars together even quicker!  The last time I blogged about them I made a peanut butter version and I also made a tasty mint version which never made it to the blog...but this coconut overload version tops any other kind I've made!

Let me start by saying there is a LOT of chocolate involved! 6 layers in fact! and the chocolate I used ended up coming from 3 different countries! so you might not be lucky enough to have all these ingredients at your fingertips but the nice thing about magic bars is pretty much anything goes! So you can swap out and substitute your favourite kinds of chocolate or the kinds that are available near to you. 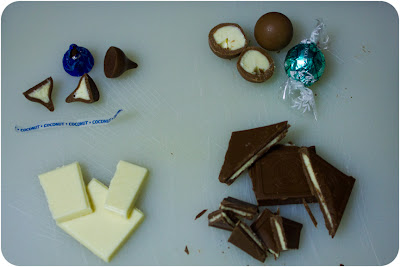 I'll break down the chocolate involved.  The top left are coconut cream filled hershey's kisses! They came from America, but were a limited edition candy I bought over Easter and I sadly haven't been able to find them anywhere since! Besides the coconut kisses are coconut lindor balls by Lindt! These came from England, and have just been brought out recently over there so when my mom and sister came to visit they made sure they brought my coconut loving self some! I've yet to meet a person who doesn't love lindor balls, so when that creamy melt in your mouth centre is coconut flavoured you just can't get much better than that!

Bottom left is white chocolate filled with shredded coconut by Lindt.  I can get that here in Canada at most supermarkets.  I'm not the hugest white chocolate fan but man I can demolish this whole chocolate bar before you can even say 'bob's your uncle'! which for all those North Americans out there is a funny little phrase that originates from Britain that we had fun introducing to some of our Canadian friends recently!

...and besides that is my fave ALL TIME chocolate! It comes from England but is rare and you can't find it everywhere.  So far I've only come across it in selected Waitrose supermarkets.  It's Lindt milk chocolate filled with creamy coconut, remember when I made brownies with it before?

So you basically take ALL of that chocolate! chop it up, throw in some regular old white choc chips and milk choc chips.  Throw some condensed milk into the mix and finish it all off with mounds of shredded coconut.  Once baked it turns into an ooey gooey mess of deliciousness that you need to have in your life! Give these a try, they will be the most rewarding 10 minute prep time of your life!! 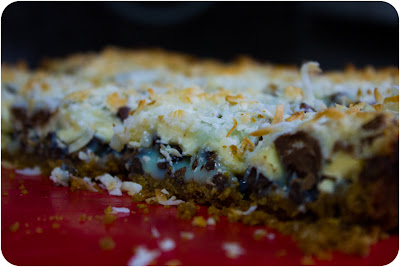 
Combine graham cracker crumbs and butter, mix well.  Press crumb mixture firmly into the bottom of the pan.  Pour sweetened condensed milk evenly over crumb mixture.  Layer evenly with the 6 different layers of chocolate.  Sprinkle the shredded coconut over everything.  Press down firmly with fork.


Bake 25-30 minutes or until lightly browned on top.
Leave to cool in pans.
Then cut into bars and transfer to cool completely on a wire rack.

Eat and enjoy!
Posted by Cupcake Crazy Gem at 07:09