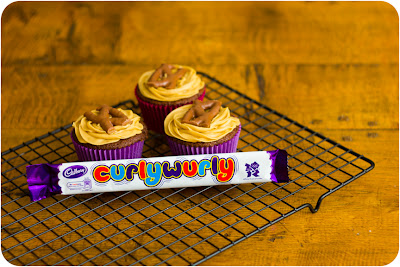 Back in the summer when it was time to leave our temp jobs behind in Milton Keynes, we decided it would be fun to bake some cupcakes for the ladies at both the agencies who found us work to begin with.  I sent them emails asking them what their favourite chocolates were and the responses that came back were Curly Wurly's and Rolos! 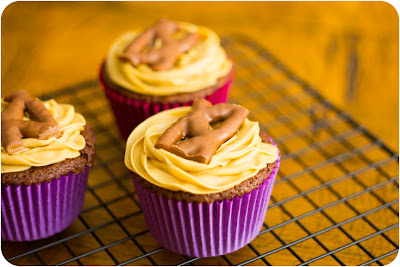 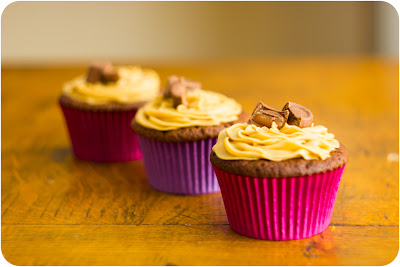 I tested out a new chocolate cake recipe as I'm always after finding 'the best' one there is! Jaclyn over at Cooking Classy described it as the unforgettable, perfect chocolate cake recipe and I would have to agree! It was really light and fluffy with the perfect amount of moistness, I'd encourage you all to bake up your own to see what all the fuss is about! 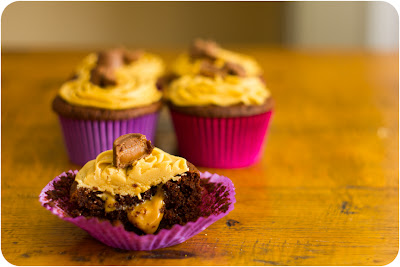 Preheat oven to 180 degrees C.
In a mixing bowl, whisk together flour, cocoa powder and bicarbonate of soda.  Set aside.

Fill cupcake cases 2/3 full.  Bake in a preheated oven for 18-22 minutes, until a knife inserted into the middle of each cupcake comes out clean.  Allow to cool for 5 minutes in baking pan until transferring to a wire rack to cool completely.

I cut a hole in each cupcake with a knife and scooped out the cake, then filled it with some dulce de leche, and plugged it with a trimmed piece of cake.

Frost with the recipe below, and finish them off with either a Rolo chopped in half or a piece or Curly Wurly or the chocolate of your choice!

Caramel Frosting:
From Cupcakes From the Primrose Bakery

Place the butter, milk and brown sugar in a heavy saucepan over a high heat and stir to combine.  Bring to the boil, stirring continuously, and allow it to boil for 1 minute.

The icing is best used immediately.  If you do need to make it in advance, thin it with a little double cream and beat well before using.  Alternatively heat the icing for 10 seconds in the microwave.

Eat and enjoy!
Posted by Cupcake Crazy Gem at 05:02