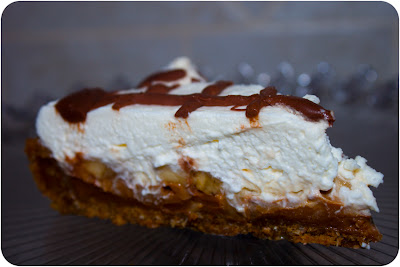 We had some American friends of ours over for dinner this week.  We wanted to make them a 'traditional' English meal so By cooked up a homemade curry! and I whipped up a Banoffee pie.  It was our friends first time trying both! For any Americans following my blog who are rather confused about our national dish...yes, it was fish and chips once upon a time but in more recent years it has been usurped by curry, Chicken Tikka Masala to be exact! It will come as no surprise to hear that Indian restaurants account for over two thirds of all eating out in England, we just love our curries - and I for one cannot wait to get back to the U.K in less than a month as I miss not having Indian restaurants on the Island!

But I digress...back to the Banoffee, Banoffee pie is an English pastry based dessert made from banana, toffee and cream.  It always struck me as funny that this is an English dish considering when I think pie I think of America but apparently The Hungry Monk restaurant in East Sussex who first developed it in 1972, were in-fact inspired by an American dish.

Their Banoffee pie was made on a pastry base, but they can also be made with crumbled biscuits and butter (like the one I made).  The inventor, Ian Dowding, has since made the original recipe available online because one of his pet hates are biscuit crumb bases...oops sorry Ian! 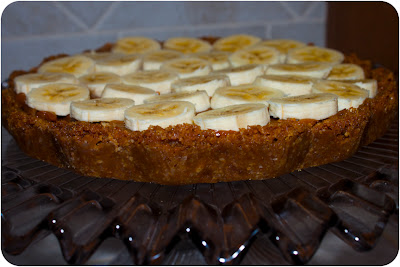 I happen to like the biscuit crumb base, and it is also a time saver rather than making pastry from scratch! Traditionally in the UK a biscuit like hobnobs would be used.  They sell these in the English aisle of the supermarket here but on the day I tried to get them they only had the hobnobs sandwiched together with vanilla cream, rather than the originals.  I had to make do with those, and as a result my crust was slightly moister than usual but still tasty! Once the crust is cooled you add a layer of dulche de leche and chill for an hour. 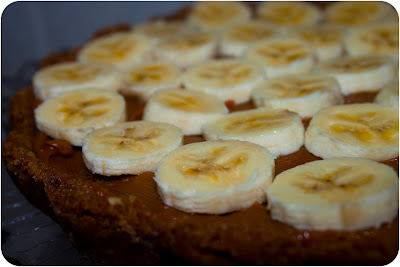 Here you can see the dulche de leche peeking through underneath the chopped up bananas. 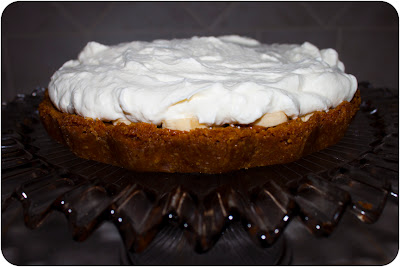 You then add a generous amount of whipped cream... 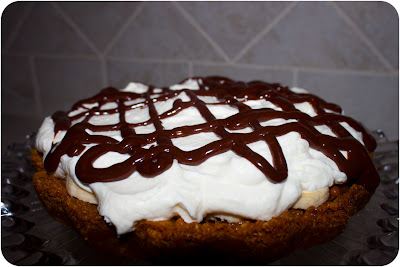 and I finished mine off with a drizzle of chocolate ganache.

Whilst enjoying the dessert with our friends the power went out, which is an all too common occurrence here on the Island.  We scrambled to find candles and get a light source going, all the while our American friend was still indulging in his slice of Banoffee Pie...in the dark! I'm taking the fact it was too good to stop eating it for just a few seconds as a sign of approval!

The recipe I used can be found here

Heat the oven to 150 degrees C. Melt the butter in a bowl set over a saucepan, or gently in the microwave.  Crush your biscuits using a food processor, or if you don't have one a rolling pin.  Mix the butter in with the biscuits and press your mixture into your tart tin, ideally one with a removable base.
Bake your biscuit base for 12-15 minutes.

Leave to cool and then gently release your base from the tin, and transfer it to a serving plate.  Spread the caramel over the biscuit base and refrigerate for around an hour.

Whilst it is setting, whip the cream and sugar together in a stand mixer or with a hand beater.  Take the dish out of the fridge.  Slice up your bananas and arrange them in a layer on top of the caramel.  Top with cream and finish off with a drizzle of chocolate ganache.  I had some cream left over that I hadn't whipped so I added a dash of this to my melting dark chocolate to thicken it up a little and then drizzled it all over the cream.
Posted by Cupcake Crazy Gem at 19:13