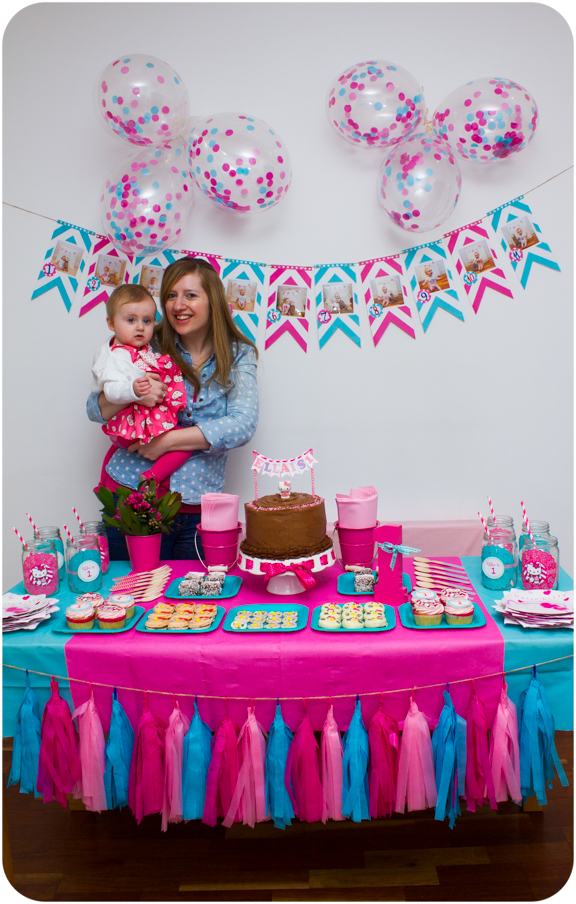 My little Ella turned 1 in February! and for as long as I can remember one of the things I was most excited about for becoming a mom was the parties I was going to be able to throw for my children! My mom always threw us the best parties growing up!

Ella is a huge fan of cats, and after receiving quite a lot of Hello Kitty prezzies at Christmas time she suddenly became very interested in Hello Kitty and since I've always been a fan too it seemed like the perfect theme! 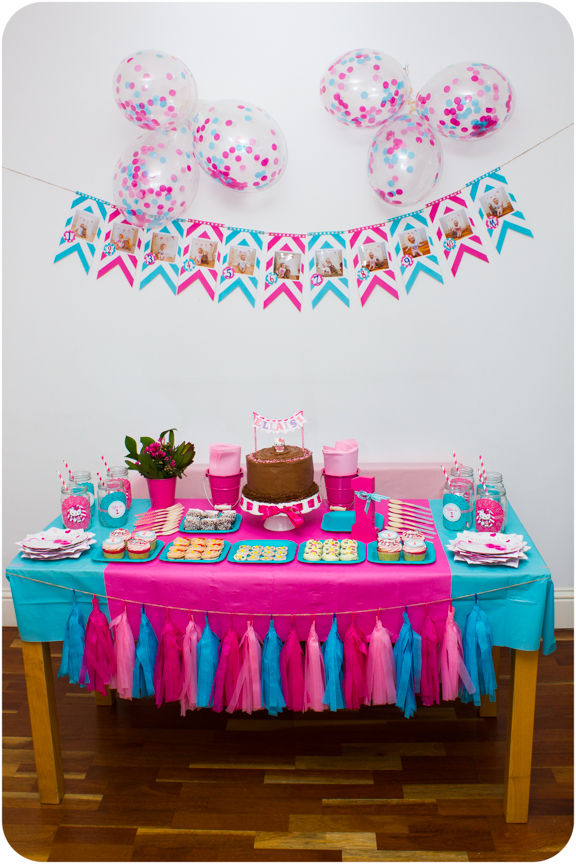 I was so in love with these polka dot confetti balloons that came all the way from Abu Dhabi! 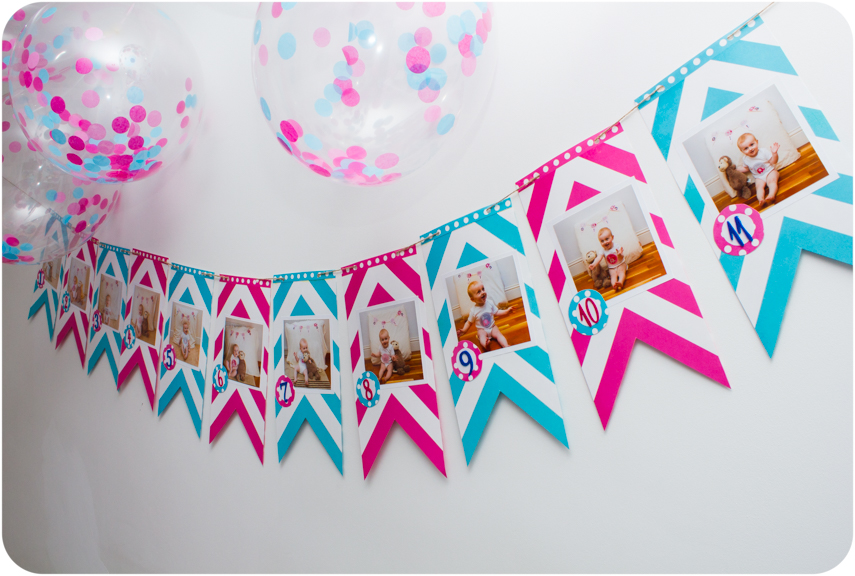 Is anyone else in love with chevrons? I am! So I was super excited to find this chevron scrapbooking card in the exact colours of the party! I made a little monthly bunting of all the growing up pics we took of her each month. 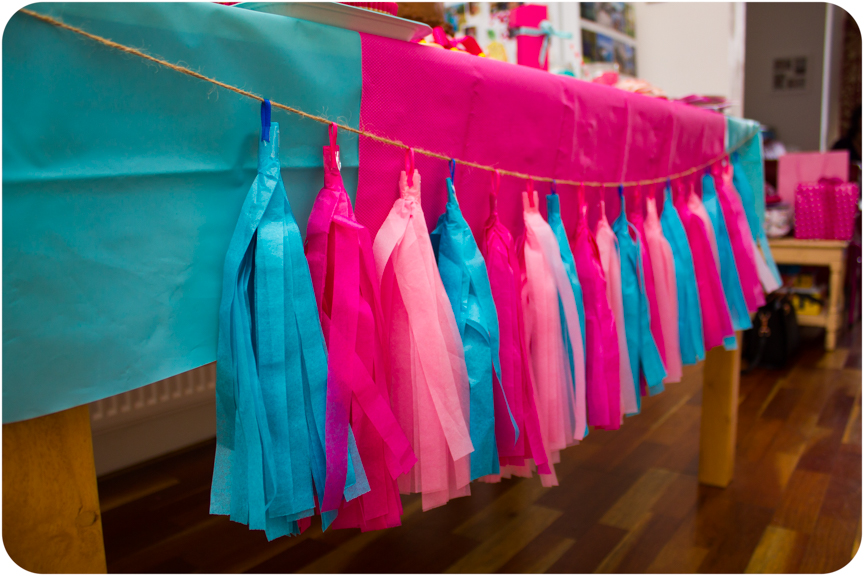 I made this tissue paper garland thanks to a tutorial from you tube! it was super easy! 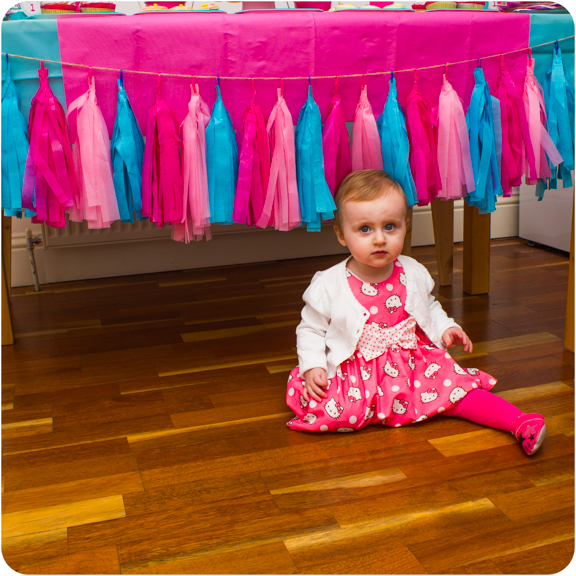 and the birthday girl wore a special Hello Kitty dress for the occasion too! 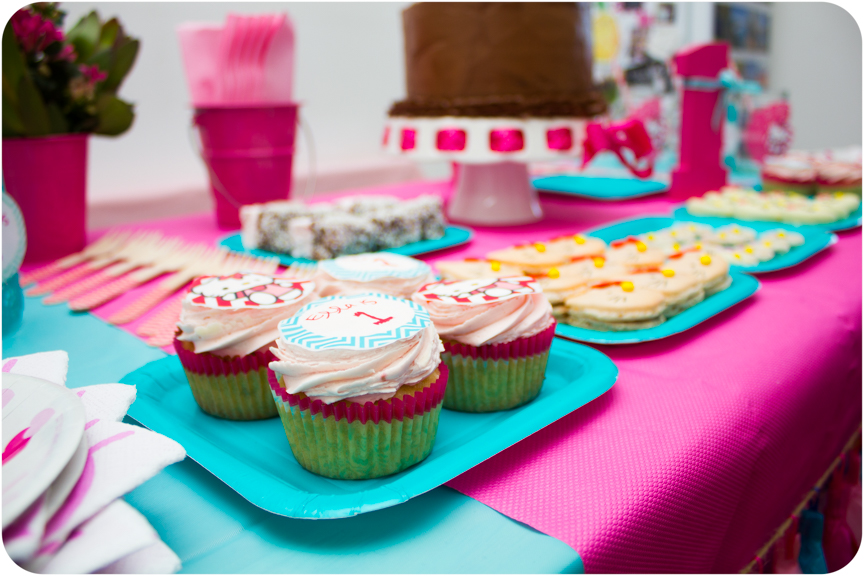 My sister made these delicious coconut cupcakes topped with raspberry frosting... 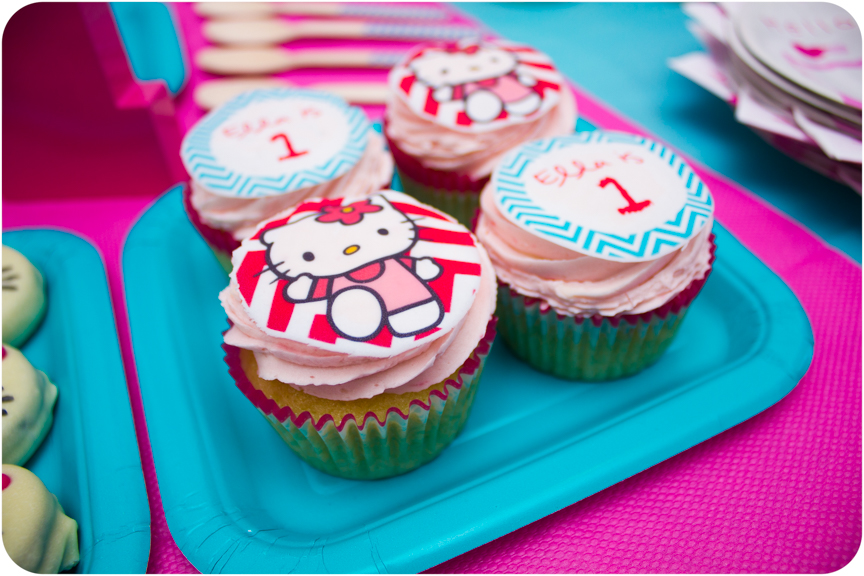 and ordered these super cute toppers to go on them that my husband designed. 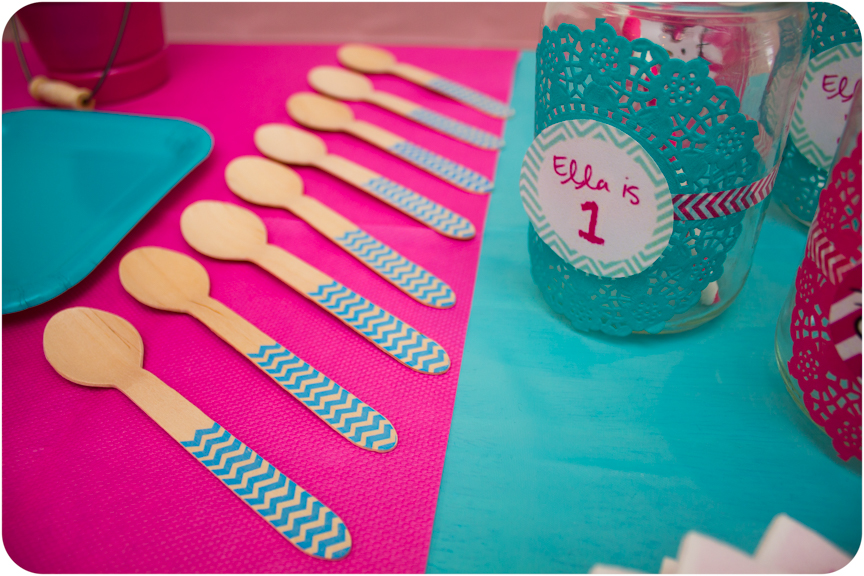 We used them on the jars for the drinks too, on top of these gorgeous doilies taped with chevron tape of course (a pinterest inspired craft there!) 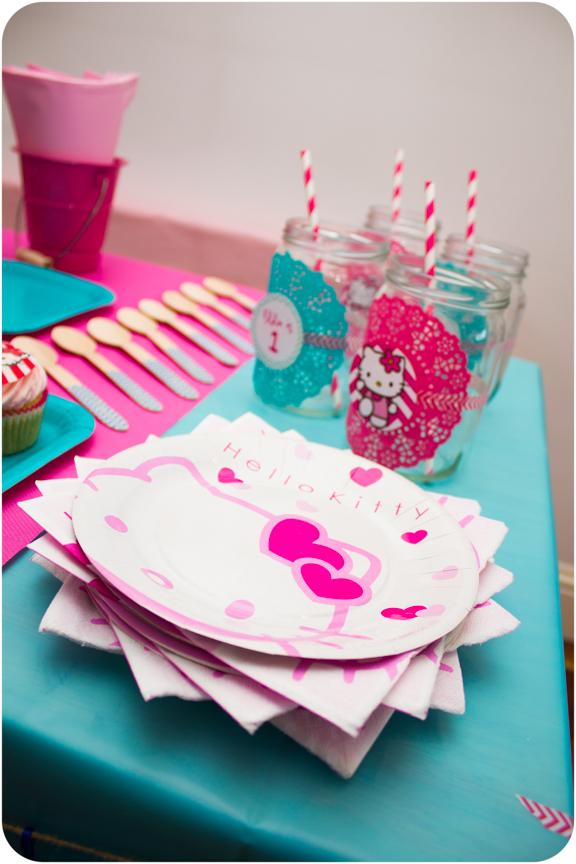 and no parties complete without some stripey straws!!! 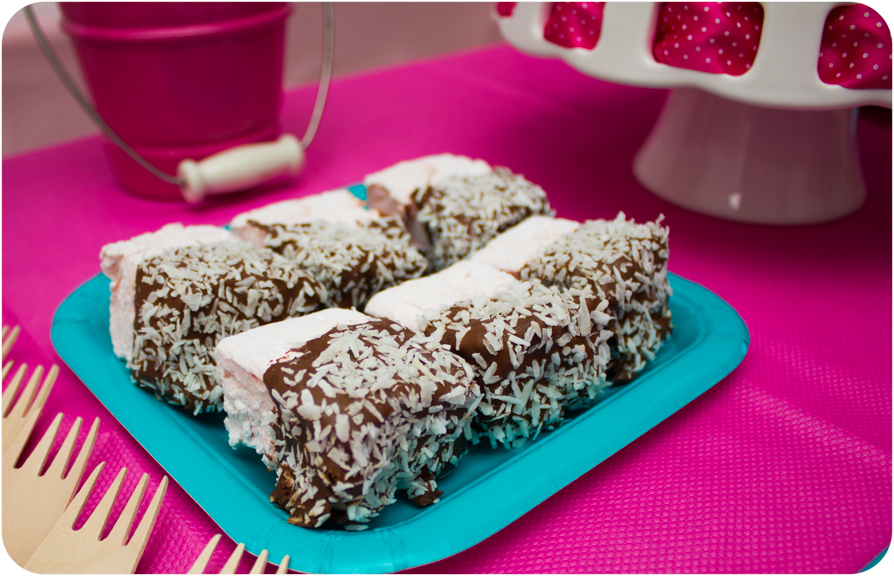 I made these homemade coconut chocolate dipped marshmallows 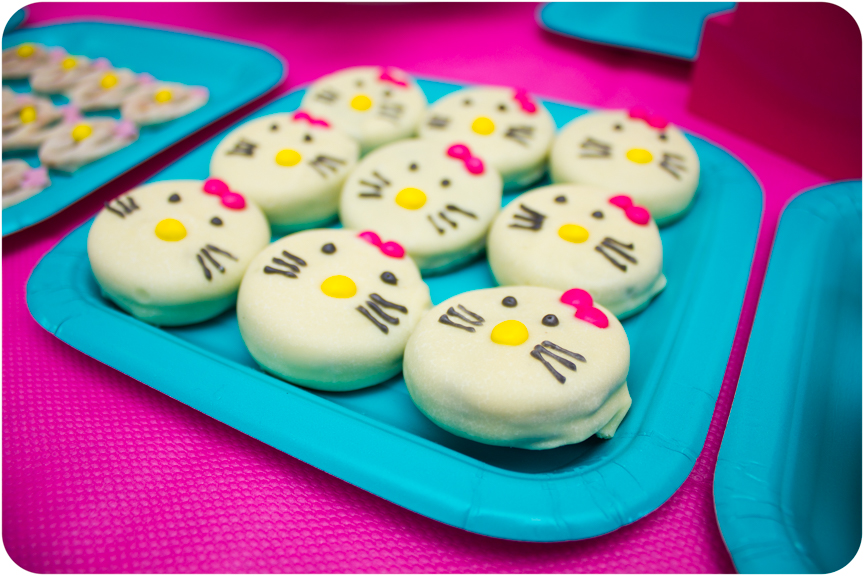 and dipped these chocolate oreos in white chocolate and drew on their little Hello Kitty faces. 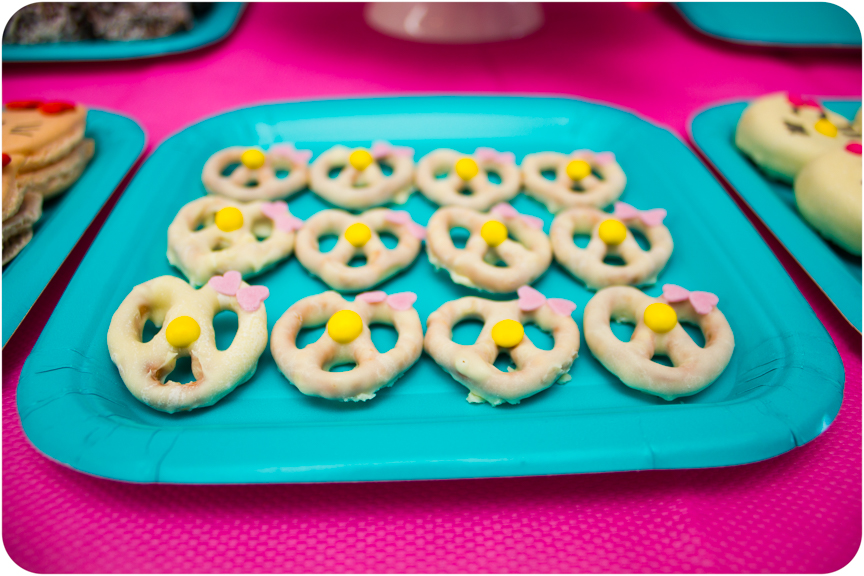 I also dipped these pretzels and gave them a little Hello Kitty twist! 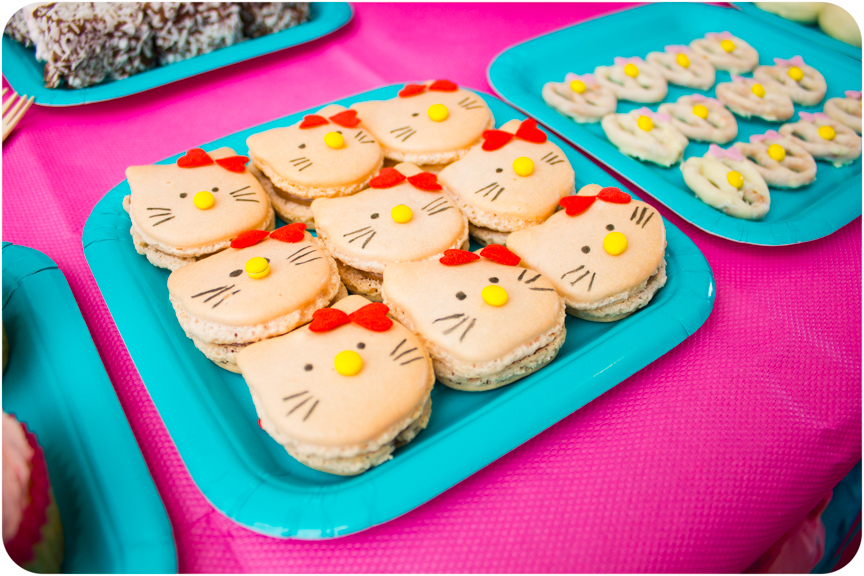 but my real masterpiece were these Hello Kitty macarons! More on them in a minute... 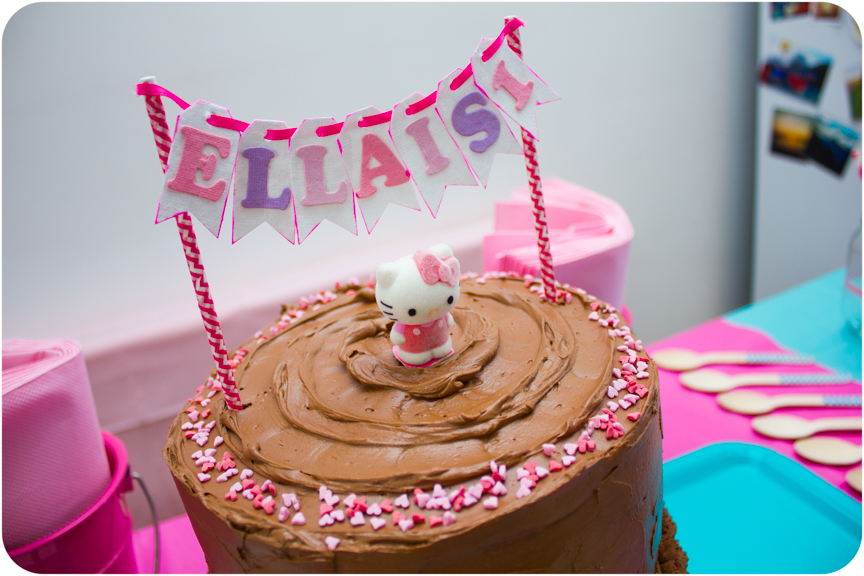 My sister helped me whip up this 6 layer chocolate cake filled with pink ombre swiss meringue buttercream and covered in chocolate swiss meringue buttercream.  If there is one thing I hate it's fondant! and I know typically children's birthday cakes involve fondant but I wanted to make sure there was no fondant in sight at Ella's party, just yummy edible and delicious treats! and how cute was the bunting Auntie Mara made too?! 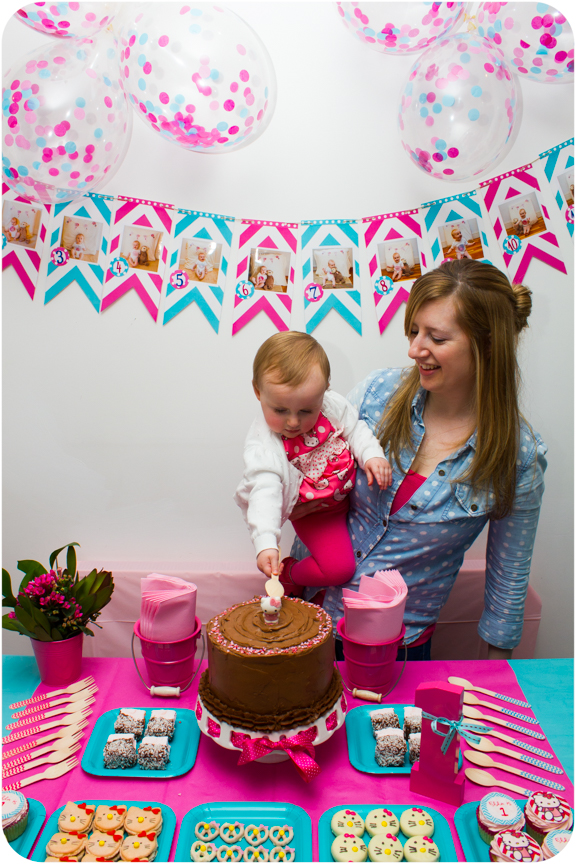 It was soon time to cut the cake and it was going to be Ella's first ever taste of cake and chocolate! I was excited! but do you know the little rascal didn't even like it! All that time and effort and thought that went into the cake and she couldn't care less!! haha! Hopefully next year she'll be more excited for her cake!! 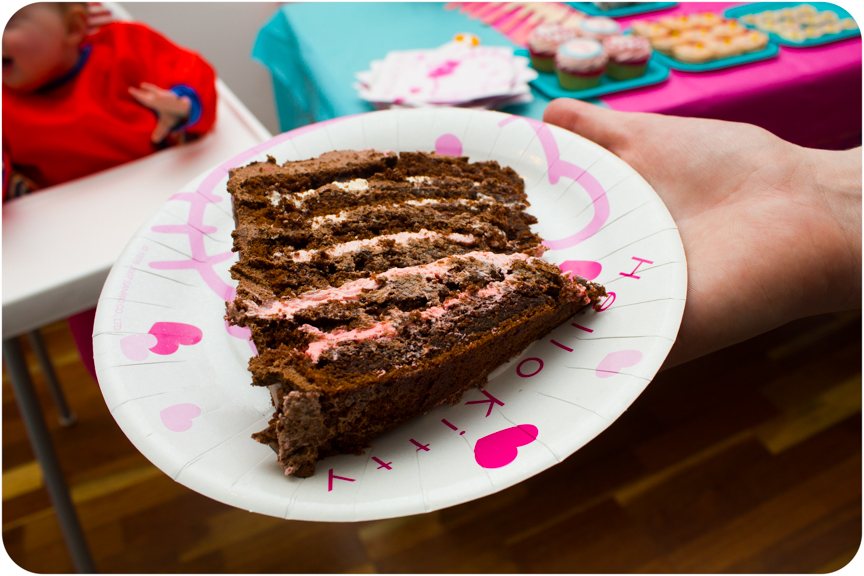 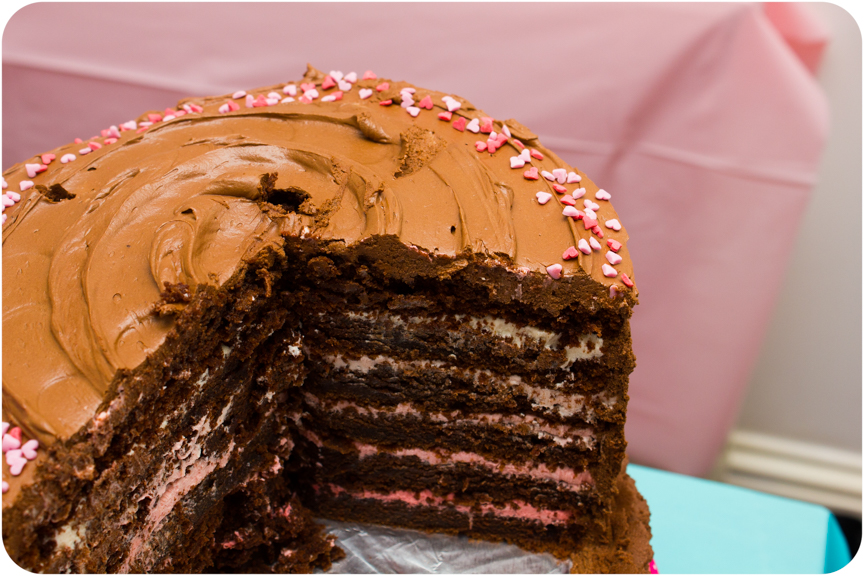 The adults still enjoyed it though!! That frosting was so creamy and dreamy! 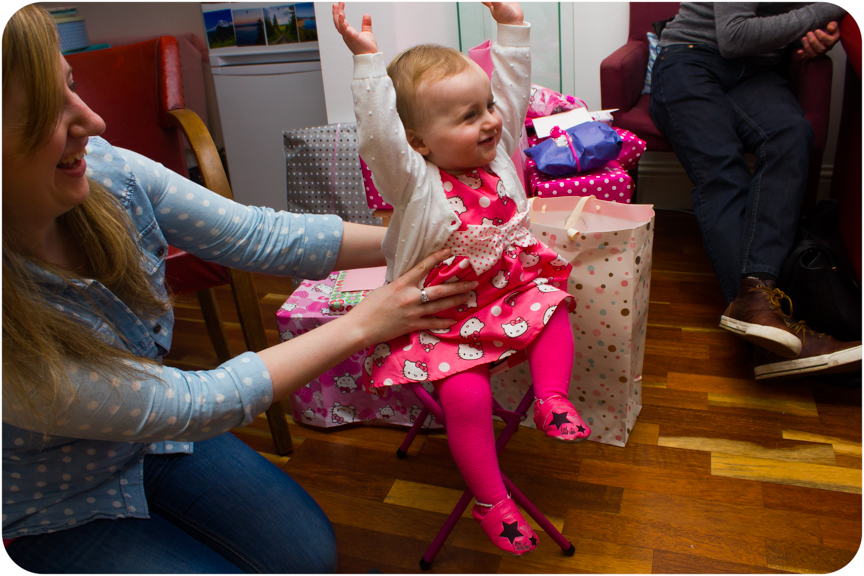 She was much more excited about present opening! and we even made a fun little Hello Kitty Photo Booth area too! 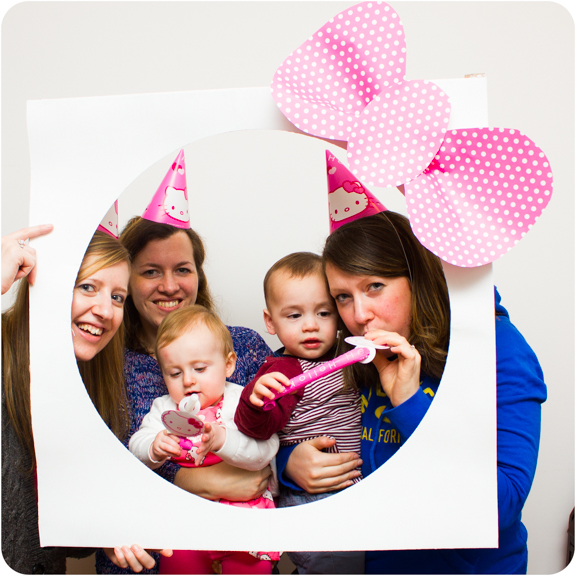 It was a lovely day spent with all her family, with pulled pork topped dogs for lunch with homemade guac and a whole lot of treats obviously!!

So...back to those tricky little macarons! I always knew macarons came with a certain aspect of horror from many bakers...as they are typically known as not easy little treats to master! So I was fully anticipating they probably wouldn't go right first time...

I didn't think I'd have to make them 4 times to get them right in the end, but hey! I think my final version turned out pretty good! 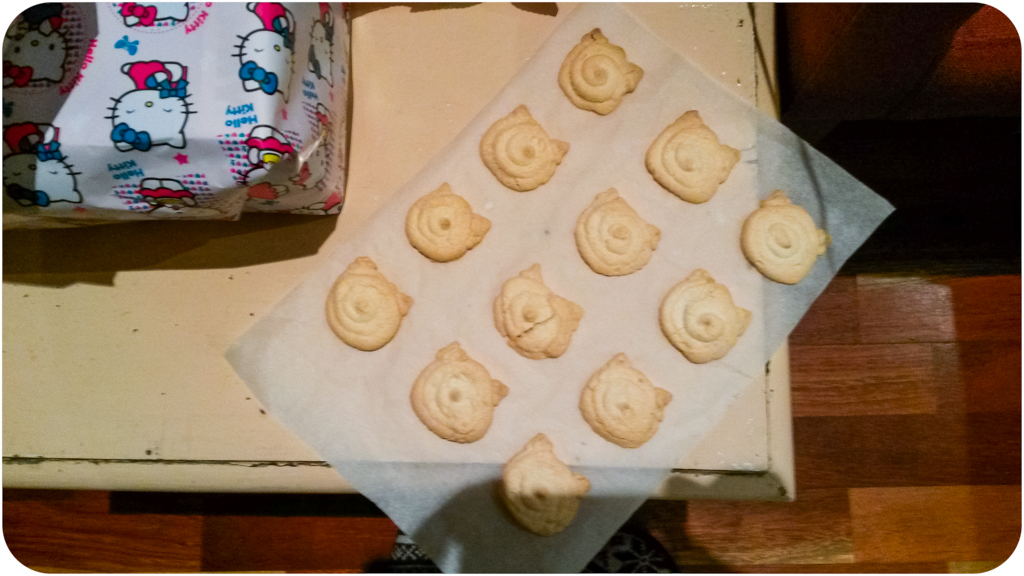 What was wrong with the previous versions...well one was totally flat, the others were way overdone, the 3rd batch were less flat but still browning around the edges (I was trying to make them just white) so I tinted the batter a slight pink and this prevented them from browning....and yes the fourth batch had feet - hurrah! victory!

I was inspired by Java Cupcake's adorable Hello Kitty macarons and used her template sheet to pipe them on but my first batch using her recipe was a flop so I changed recipes.  It might have been that my technique had just been wrong first time around but I didn't want to take any chances.

Eventually, it was this recipe and this youtube video that made everything come together and turn out great! There is also an FAQ on macarons that you should read too just to be thorough and fully prepared! 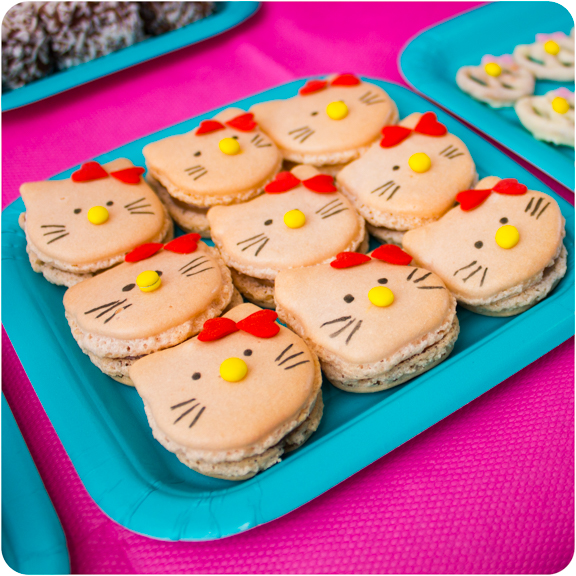 Print out the Hello Kitty template pattern.   Lay it on a baking tray. Tape a piece of parchment paper over the pattern.

Measure out your ingredients very precisely.

Sift the icing sugar and almond flour together through a sieve into a food processor.  Blitz for 2 minutes.  Stop and scrape down the side of the processor with a spatula.  Blitz again for 1 more minute to make sure it is as fine as possible.  Sift half the sugar and flour mixture into a large bowl.  Throw away any larger bits of the almonds that remain in the sieve to ensure a smooth batter.  Sift the second half of the sugar and flour mixture.  Set aside for later. 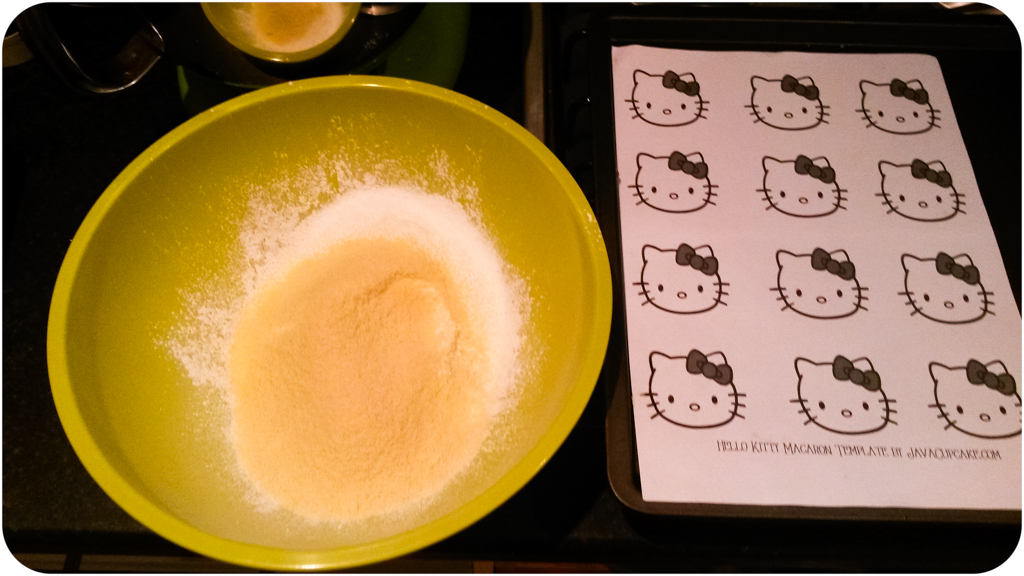 Beat the egg whites in the bowl of an electric mixer.  When the eggs are bubbly and the whisks are leaving marks, add the caster sugar slowly over the next minute or so.  Keep on beating at medium-high speed for 3-4 minutes until the egg whites are stiff.  (It is really helpful to watch the youtube tutorial I linked to above because it shows you pictures of what each stage needs to look like).  It is only stiff enough when the peaks hold themselves, if they fall back into the mixture you need to keep beating.

Add food colouring, a few drops at a time - a little goes a long way.

Using a spatula, fold the egg whites delicately until the colour is well incorporated.

Add a third of the almond/sugar mixture to the egg whites and keep on folding delicately - never beat.

As you incorporate the almond mixture, the batter seems to curdle, but as you fold it becomes creamy again.

Keep on adding the almond mixture and folding to incorporate it, so no pockets of dry ingredients remain.

In the end the batter will be quite thick, shiny and creamy.

Spoon the 3/4 of the mixture into a piping bag fitted with a large round tip.  Pipe out the circle of the Hello Kitty faces.  To make round macarons easily, keep the tip very close to the parchment paper and lift off quickly when enough batter has come out. 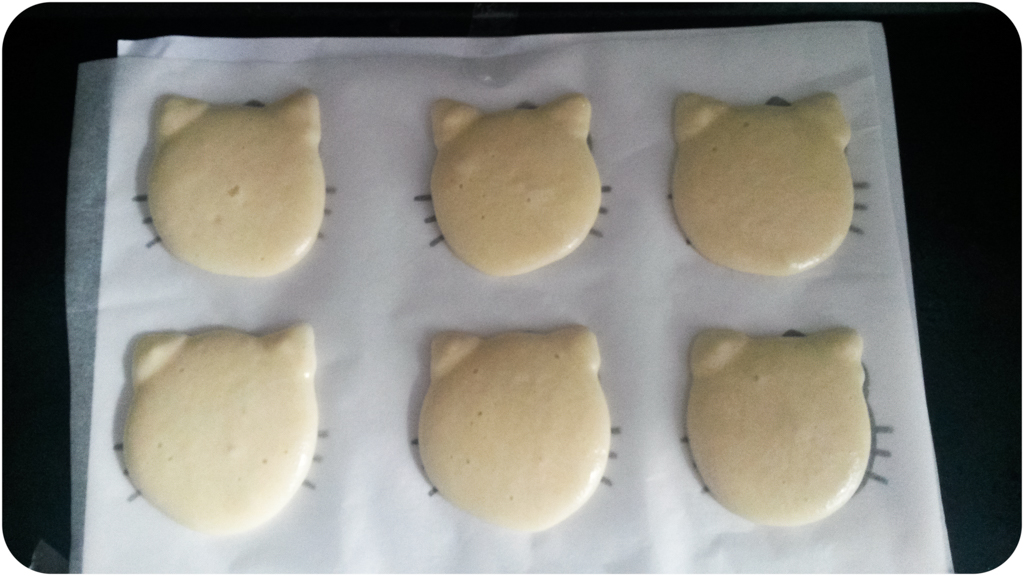 Spoon 1/4 of the mixture into a piping bag fitted with a Wilton #4 tip and pipe the ears onto the already piped out circles.

Once all the macarons are piped out, bang the sheets against the worktop to the let the air bubbles out and flatten the shells.

Don't forget to slide the template out from under the parchment paper before baking.

Let the macarons rest for at least 20 minutes.  Preheat oven to 150 degrees C.

Bake the macarons for 14 minutes.  To test their doneness, tap lightly on the shell.  When ready, they are firm on their feet. 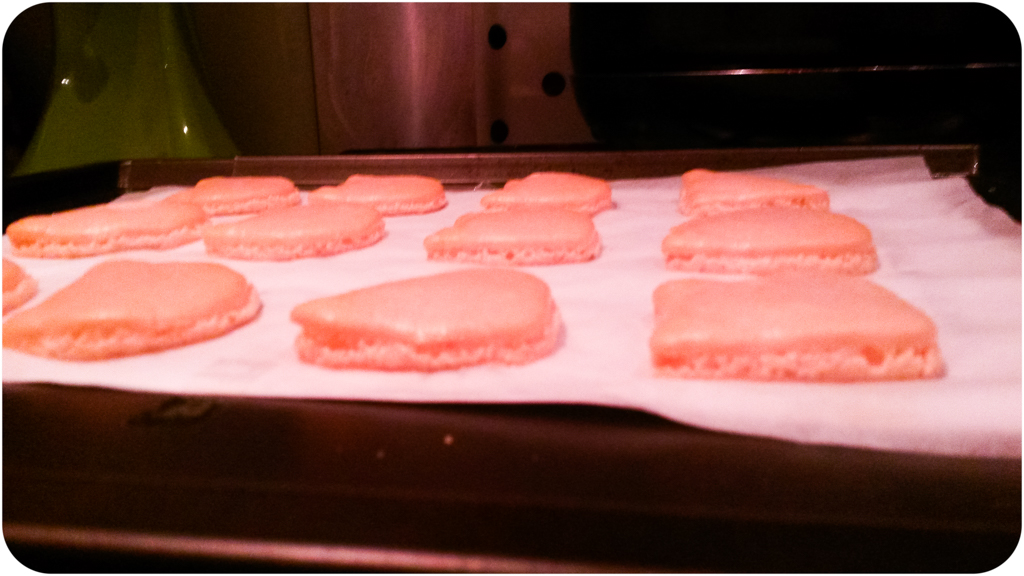 Let the shells cool completely before removing them from the parchment paper.  They should be easy to lift off.

Using edible glue, brush a little on the back of the yellow chocolate beans. 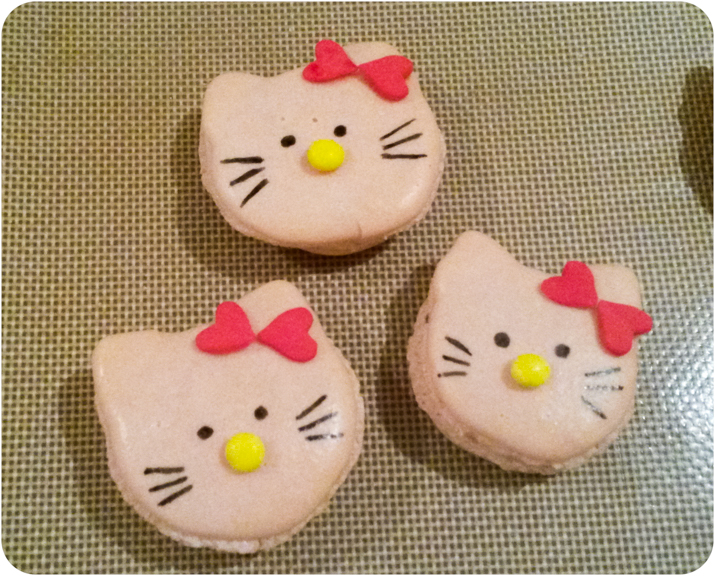 Stick them in the centre of the macaron.

Using an edible black food pen, draw the whiskers and eyes on.  Brush some edible glue on the back of two red heart sprinkles.  Arrange them across the ear of the macaron so it looks like Hello Kitty's bow.  Wait for about 30 minutes for the glue to set and the face to be ready.

Fill the shells with whatever filling you fancy.  Ganache works great.  I filled them with some of the leftover chocolate swiss meringue buttercream from the cake.

Sandwich the shells together.

Store in an airtight container until ready to serve.  They are best served soon after piping the filling because if you leave them filled for too long the filling can make the shell soggy.

Eat and enjoy, and pat yourself on the back - you just made macarons! hooray!
Posted by Cupcake Crazy Gem at 22:40