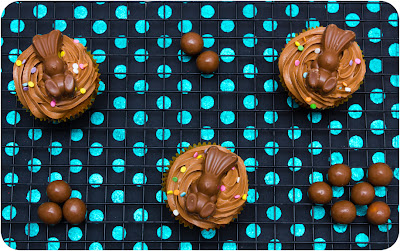 Last week I ran another cupcake stall at the spring market at my Uni, it was slightly less attended than the one I did at Christmas but fun all the same! If your definition of fun is 14 hours straight of baking :)

So over the next few weeks I will show you the Easter-y delights that I baked up for the occasion!
Starting with my favourite of the bunch - the Malteser Bunny Cupcake!

I am obsessed with Malteser Bunnies, when that time rolls around each year that they start popping out on Supermarket shelves I can't help but buy one...every single time I go to the supermarket! Literally, I can't walk by them and not pick them up! It's not a good habit for my wallet or my waist line.  Luckily I have a rather fantastic mom who likes to supplement my addiction by posting me packages of the little guys, even when I'm not even living in the same country (that is if she can hold off eating them until my package is posted - the addiction must run in my family!)  In a package she sent me a few weeks back filled with baking goodies, cupcake magazines, cake stands etc... I called her and told her the one thing I was most excited about was the Malteser Bunny she had included.  She guiltily asked how many Malteser Bunnies I had received, so I told her just the one, to which she shamefully replied that she had bought a whole bundle but by the time it came round to post my package only one remained!  She felt so bad that she promptly sent me a new package the next day filled with bags and bags of mini Malteser Bunnies! Yes you heard me right - mini's!
When my mom first told me she'd been snacking on mini ones I thought she was making it up, I had looked all over in the supermarkets up here and not seen any mini ones, it seems they were rather scarce! but I knew if they were creating mini ones then they would just be called out to be used as cupcake toppers! and so that is exactly what I did. 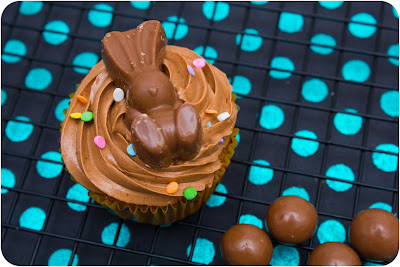 I baked up a malt cupcake base, the most amazingly delicious chocolate malt frosting that you seriously need to have in your life, and then topped the regular cupcakes with the mini bunnies and the mini cupcakes with regular Maltesers! and a couple of sprinkles never hurt anyone. 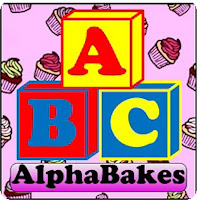 I am entering these into the Alphabakes Challenge this month because the theme is 'M' based bakes.  It is hosted by Caroline Makes this month, and will be hosted by Baking Addict next month. 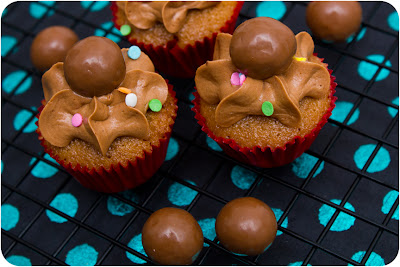 Malt Cupcakes:
Makes 12 regular cupcakes and 24 mini's
From Cupcakes from the Primrose Bakery

Preheat the oven to 180 degrees C.
Line the cupcake trays with cupcake cases.

In a large mixing bowl, cream the butter and sugars until pale and smooth, which should take about 3-5 minutes using an electric mixer.  Add the eggs, one at a time, mixing for a few minutes after each addition.

Fill the cupcake cases 2/3 full and bake in the oven for about 25 minutes until slightly raised and golden brown.  If a skewer inserted into the middle of one cupcake comes out clean then they are done.

Remove fromt he oven and leave in the cake tins to cool for about 10 minutes before carefully placing on a wire rack to cool completely.

Malted Belgian Chocolate Frosting:
Makes enough to frost 50 cupcakes and to have plenty leftover!
From Sweetapolita

In a bowl of a stand mixer fitted with a paddle attachment, combine half the icing sugar and butter and beat on low speed for one minute.  While that is mixing, melt the chocolate in a heatproof bowl over a pan of simmering water, and set aside to cool. Add the rest of the icing sugar and butter to the stand mixer and mix on medium speed until completely combined (I do it in two stages so as not to completely cover my kitchen in icing sugar).

Add vanilla and Ovaltine, and beat on low speed until well combined.

Add the melted, cooled chocolate and beat on medium speed until smooth (about 2 minutes). Add double cream and beat on high speed for one minute.

The recipe recommends using it straight away, which I did to frost the cupcakes.  I also refrigerated the leftovers and iced some sugar cookies with it a few days later and it was still delicious.  I just left it to get up to room temperature and then whipped it up in my KitchenAid again before using it.