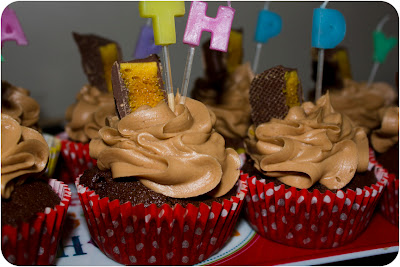 I was so disappointed with these cupcakes...I almost didn't take a picture of them, I didn't feel they were blog worthy! but now I am unemployed I don't know how often my funds (or lack thereof!) will let me get around to baking so I decided they'd have to do!

Don't get me wrong, they actually turned out rather delicious! but you know when you have one of those baking days where everything seems to go wrong...it had just put me in a bad mood and I didn't feel proud enough to publish them! 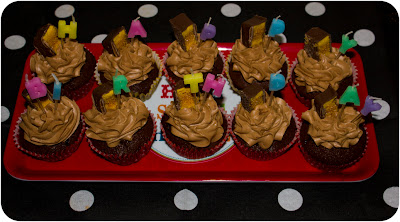 This cupcake exploit actually started out pretty well! It was my sister's birthday and her very favourite chocolate bar is Cadbury's Crunchie! so I decided I would bake her up some birthday cupcakes as a tribute to her fave chocolate bar.  I busily began researching online and came back with a big fat zero on the number of actual Crunchie cupcake recipes I could find.  Sure there were chocolate cupcakes that just had a Crunchie broken up on top or perhaps some Crunchie in the frosting but I wanted more than that!

So I took it upon myself to design my own! There were going to be decadently rich with big crunchy pieces of honeycomb strewn through the batter.  My first problem came when my husband got a last minute call from an agency for a day of work so off he went with our car, the car I was going to use to go and buy the ingredients in! so I had to throw the chocolate cupcake recipe I was planning to use out the window and make do with the limited supplies in my parents kitchen! and the limited utensils - I discovered I hate baking in an unfamiliar kitchen! I couldn't even find a spatula...luckily I remembered I brought one back in my suitcase from the Caribbean but all the rest of my kitchen and baking utensils are packed away in boxes in my parents garage that are all precariously balanced one on top of the other, so it will be a while before I'll be able to get my hands on them!

One of my other triggers of stress was that some of the cupcake cases peeled away from the cakes...how I hate that! Of course my hundreds of perfectly adequate and non 'peelable' cases are in those packed up boxes previously mentioned! so I had to settle on these 'fairy cake' size ones from Morrison's and along with peeling away from the cakes they also stained my cupcake baking tray red!

I guess in the end all that matters was that the birthday girl enjoyed them, as did the rest of my family...my mom ate 3 in one night! and I quite liked the cute little candles we put on top too!

I guess I'm also learning not to be such a perfectionist, I'm pretty sure I haven't made a cupcake I'm completely happy with yet! 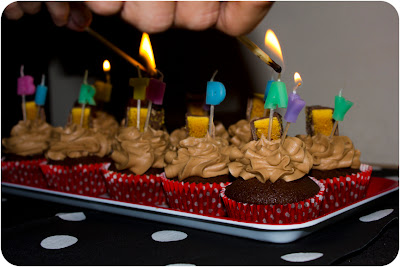 For when you only have cocoa powder in your cupboard....

Use this recipe from Joy of Baking

Preheat oven to 190 degrees c.
In a small bowl stir the cocoa powder and boiling hot water together until smooth.  Let it cool to room temperature.  In another bowl whisk together the flour, baking powder and salt.

In a stand mixer beat the butter and sugar until light and fluffy.  Add the eggs one at a time beating until smooth.  Scrape down the sides of the bowl and beat in the vanilla extract.  Add the flour mixture and beat until just mixed in.  Finally add the cooled cocoa mixture and stir until smooth.

Chop up the Crunchie into bite size pieces, toss it in flour and add to the batter.

Fill each cupcake liner 2/3 full and bake for 15-20 minutes, or until a toothpick inserted comes out clean.

and what better way to top off your 'Cadbury's' cupcakes then with some...

1. Break up the Dairy Milk into pieces and throw it into a jug, microwaving in spurts of 30 seconds until it is melted.  Leave to cool
2.  In an electric mixer, beat the sifted icing sugar with the butter, the milk and the vanilla until it is smooth and fluffy.
3.  Add in the chocolate and keep beating until it is the consistency you desire.
4.  Pipe frosting onto the cupcakes and add a chunk of Crunchie on top.
Posted by Cupcake Crazy Gem at 09:00