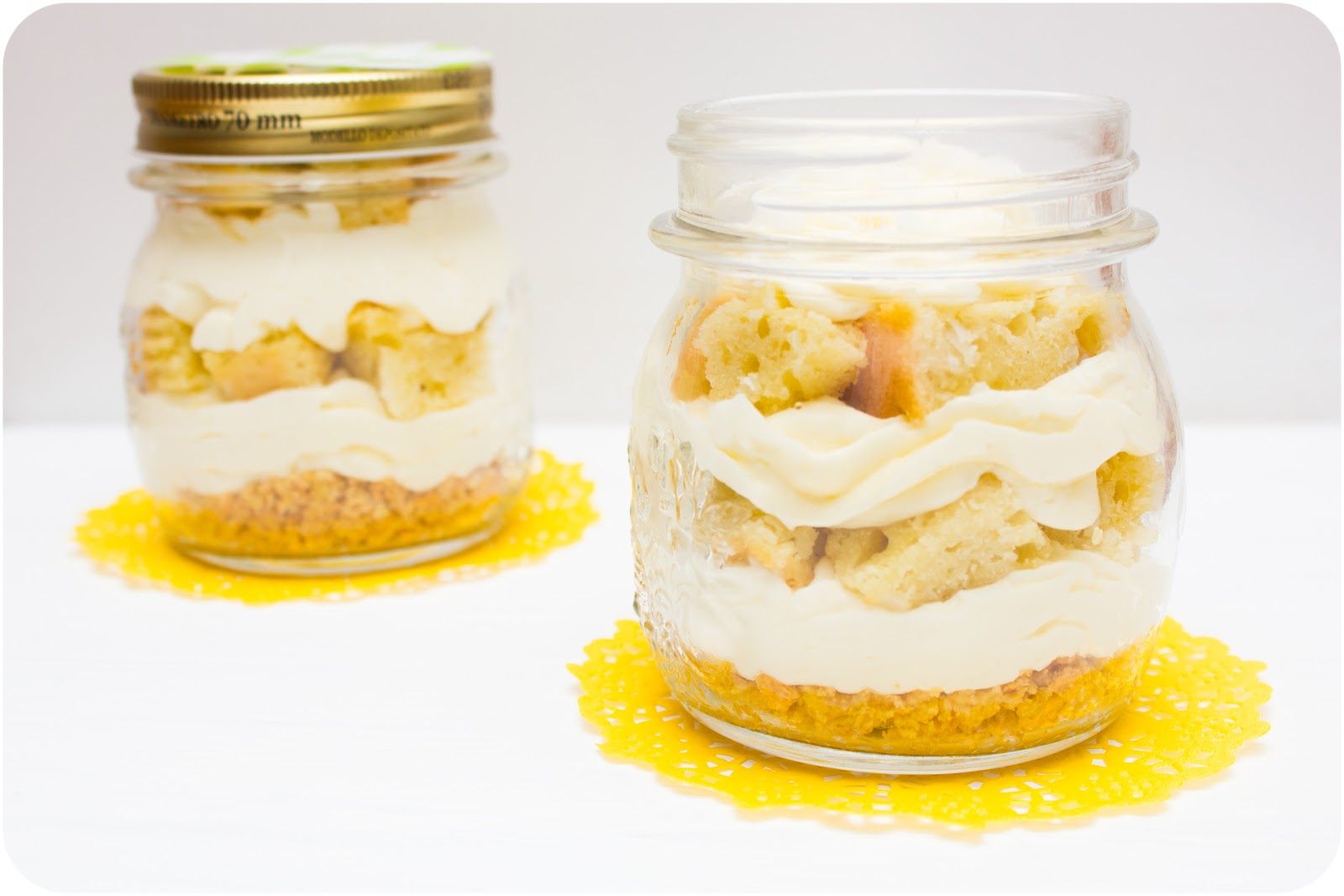 There are some flavour combinations you just can't beat! Coconut & lime happens to be one of them, and I can't get enough of it! As is evidenced on this blog from my Key Lime Pie Cupcakes to my Lime, Coconut & White Chocolate Blondies and Coconut & Key Lime Curd Layer Cake to my No Bake Coconut & Key Lime Cheesecake. 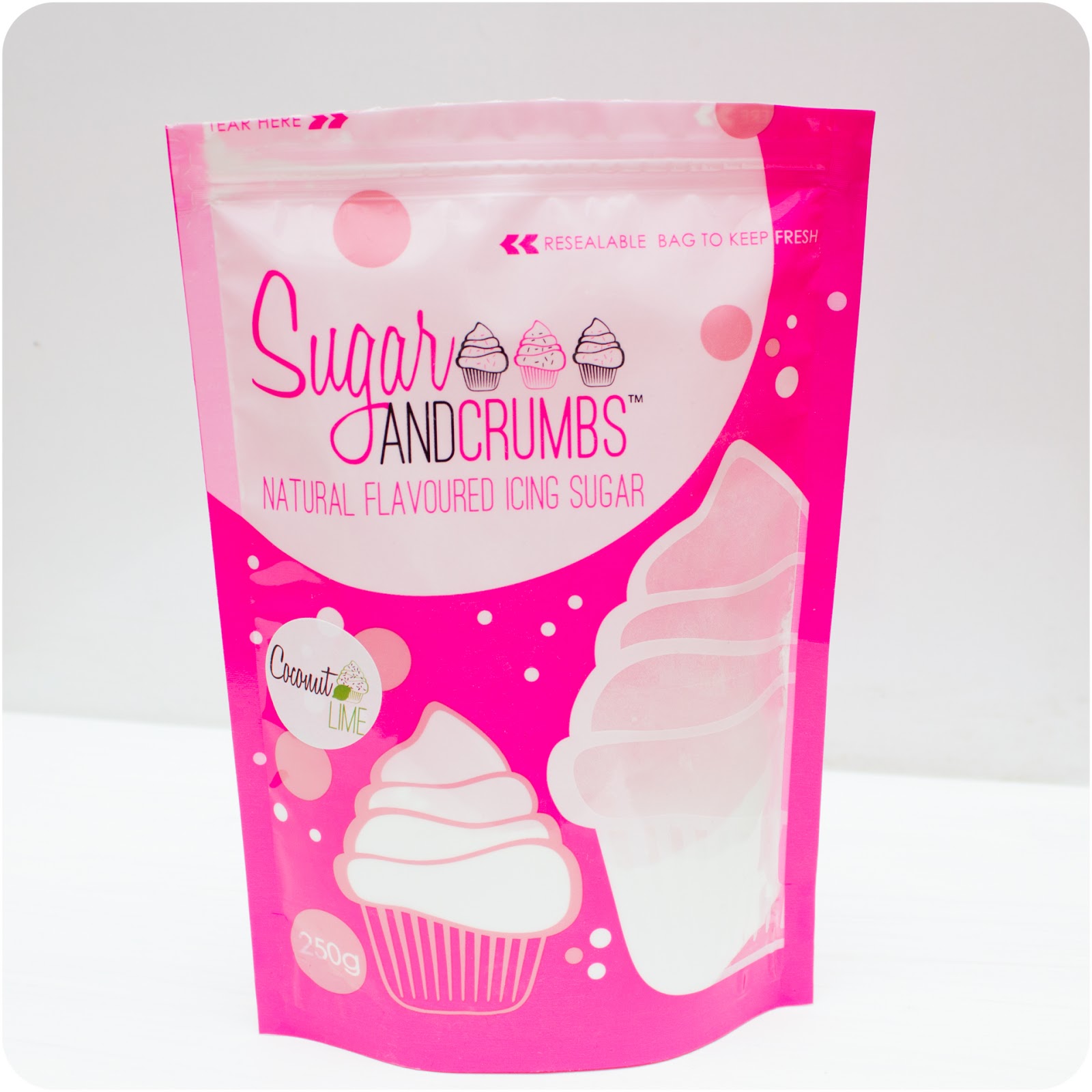 When Sugar and Crumbs got in touch with me and told me about their flavoured icing sugars, I was intrigued and when I heard they did a coconut and lime flavour it was a done deal! I had to try it out for myself! so they sent me some to try and I decided to give it a whirl and turn it into some cheesecake in a jar! 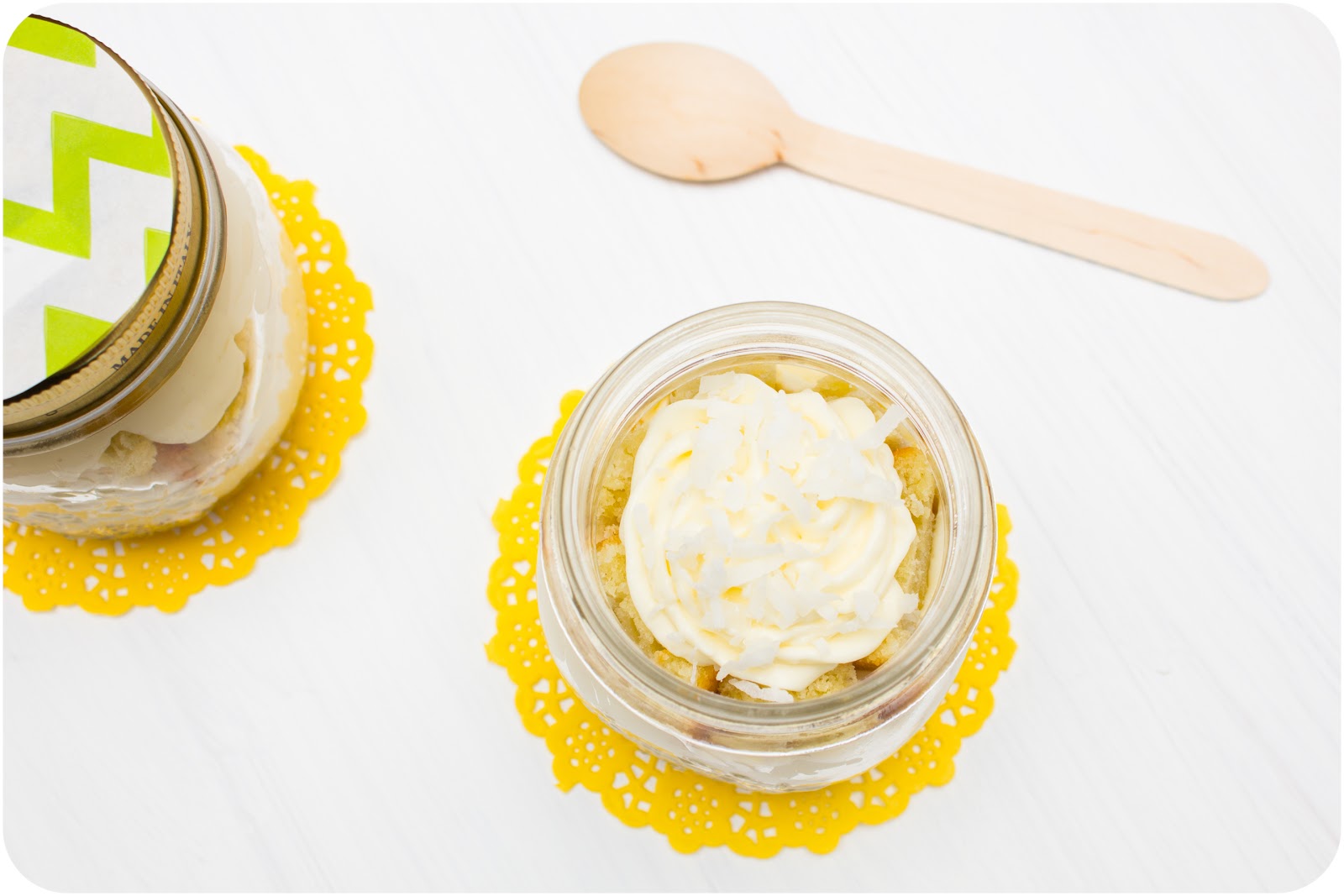 Initially I had planned to use a few drops of coconut extract in the cheesecake mix as I usually would, but the beauty of these flavoured icing sugars is I didn't need to add any! The sugar was so flavourful that it would have been an overkill adding extract to my surprise! and oh the smell as you opened up the pouch to add it into the mixer - it was totally tropical and delicious! and the great thing is the flavours are all natural.  It tasted just as good as it smelt too!

I layered the cheesecake in between some coconut cupcakes, and combined with a graham cracker crust this was one tasty dessert to go!

I even tied a little spoon on and gave them away as gifts, the perfect little no bake treat! 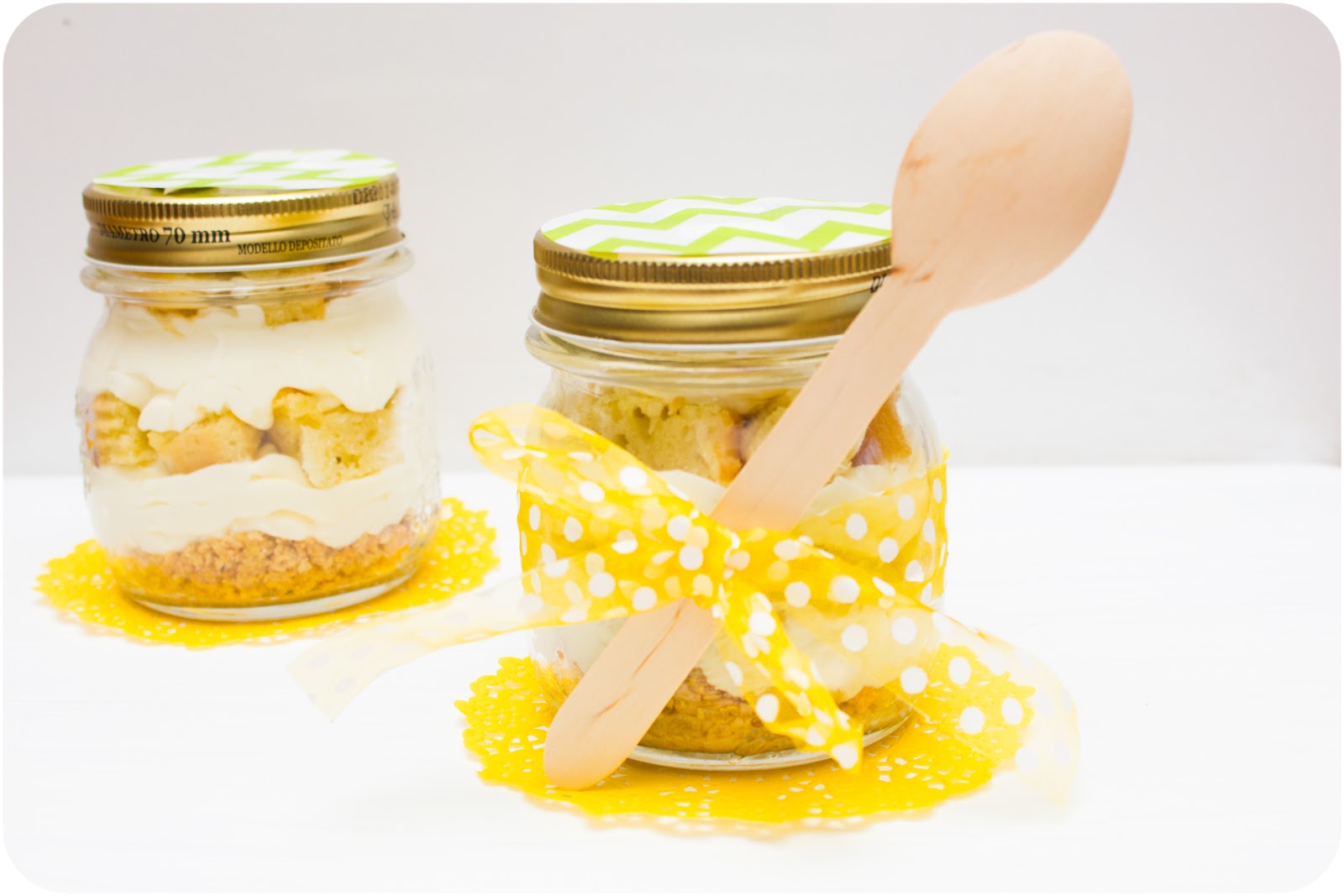 for the cupcakes:
3 coconut cupcakes - recipe from Trophy Cupcakes

Using a whisk, whip the double cream until stiff peaks form.
Beat the cream cheese and icing sugar together with a paddle attachment in a freestanding electric mixer.
Stir the cream into the cream cheese mix with a spoon until incorporated.  Stir in the desiccated coconut and refrigerate for 30 minutes.

Melt the butter in a microwave safe bowl for 30 seconds.
Blitz the graham crackers into crumbs using a food processor.  Add in the melted butter.
Spoon two and a half tablespoons of biscuit mix into the bottom of each jar.  Smooth it out on top with the back of a teaspoon.

Cut coconut cupcakes into cubes.  I used 1.5 cupcakes per jar.

Put the cheesecake mix into a piping bag with a star nozzle fitted.

I received the icing sugar complimentary from Sugar and Crumbs, but all views and opinions expressed are my own.
Posted by Cupcake Crazy Gem at 21:22 3 comments: 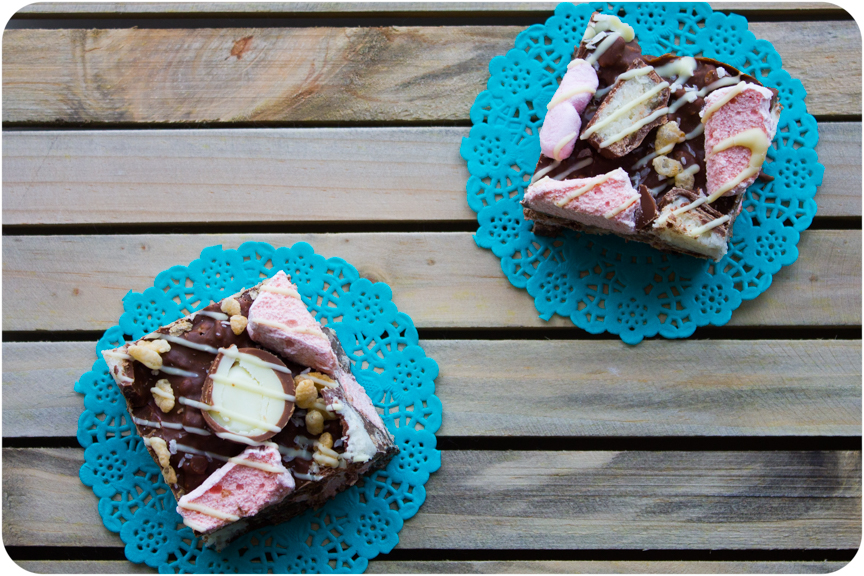 After whipping up the batch of coconut marshmallows, I knew it was only a matter of time before they were going to make their way into some rocky road! and of course because I don't like to do things by halves it had to be truly coco-rific.  I have made a toasted coconut rocky road before with coconut m&m's and coconut biscuits so this one was still as coco-nutty just with a few different coconut mix ins this time! So I added chopped up Bounty bars and Coconut Lindor truffles and a sprinkling of desiccated coconut too. 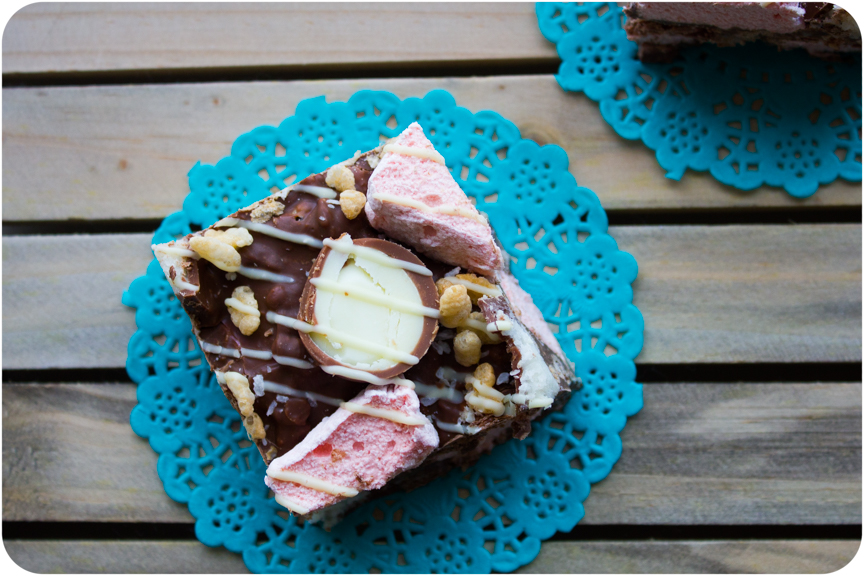 They were so delicious, I feel like I'm never going to be able to make rocky road again unless it's with homemade marshmallows! They have certainly set the standard high!

I'm already dreaming up the future homemade marshmallow flavour combos that will be turned into more decadent rocky roads! 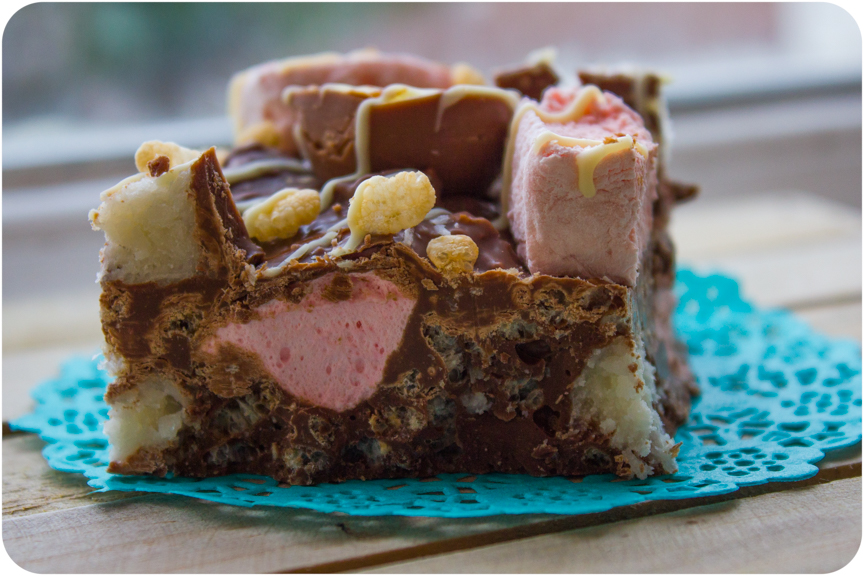 Break milk chocolate into pieces and put in a large heatproof bowl above a pan of boiling water.  Stir in vegetable oil and mix until melted.

Remove from the heat and let cool for 10 minutes.

Chop the marshmallows into quarters, the lindor truffles in half and the bounty bars into about 10 chunks. (Reserve back a few handfuls of the mix ins to use as toppings)

Stir in the rice krispies and desiccated coconut.  Once completely cool, stir in the marshmallows, bounty and truffles.  Mix well.

Spread into the prepared pan, smoothing out on top.  Add the rest of the toppings.

Chop the white chocolate and put it in a small microwavable bowl with the vegetable oil.  Microwave in 30 second bursts until melted.  Put into a piping bag and drizzle over the rocky road.

Refrigerate for an hour, or overnight. 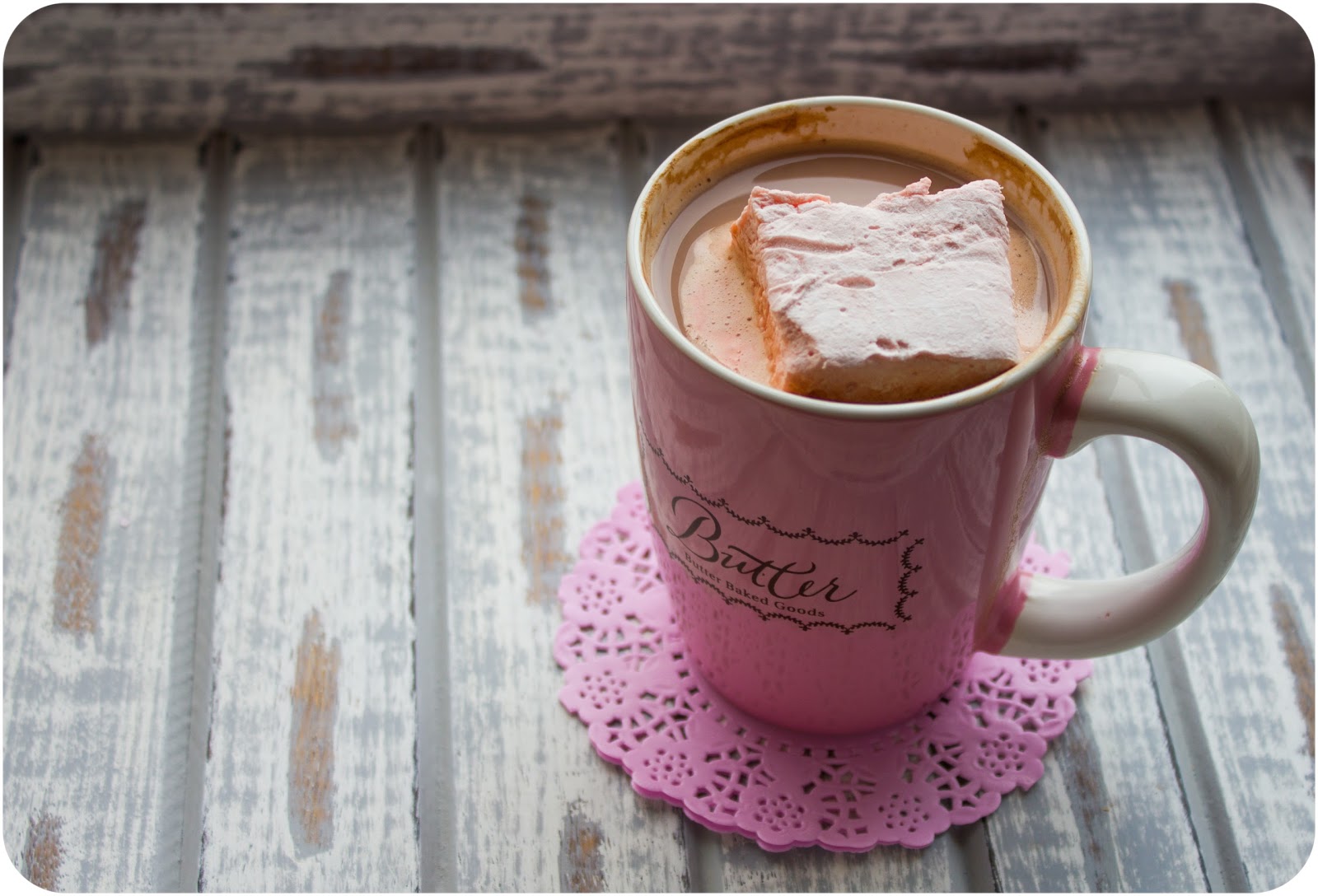 When we moved to Vancouver I was so excited about all the potential baked goods the city had to offer! I had visions of gorgeous little cupcakeries on every block and gourmet treats around every corner! The reality was not so great.  I tried so many mediocre cupcakes and went to many different establishments that came highly recommended but Vancouver was still lacking in impressing me treat wise! Then a very lovely friend recommended Butter Baked Goods to me and the day I stepped through their beautiful pastel doors I knew I'd found what I was searching for!

From sky high chocolate peanut butter layer cakes to toasted marshmallow s'mores bars, pineapple coconut scones to bars loaded with chocolate, pecans, coconut and dulce de leche (otherwise known as the Dunbar!) and of course their homemade marshmallows were the icing on the top! I'm not sure I'd ever had a homemade marshmallow before I tried Butter's...and I've tried many since but none have compared! From passionfruit to gingerbread to maple to toasted coconut there were so many flavours to choose from...in fact at the last count they had 18 flavours but I'm sure they've dreamt up many more since! 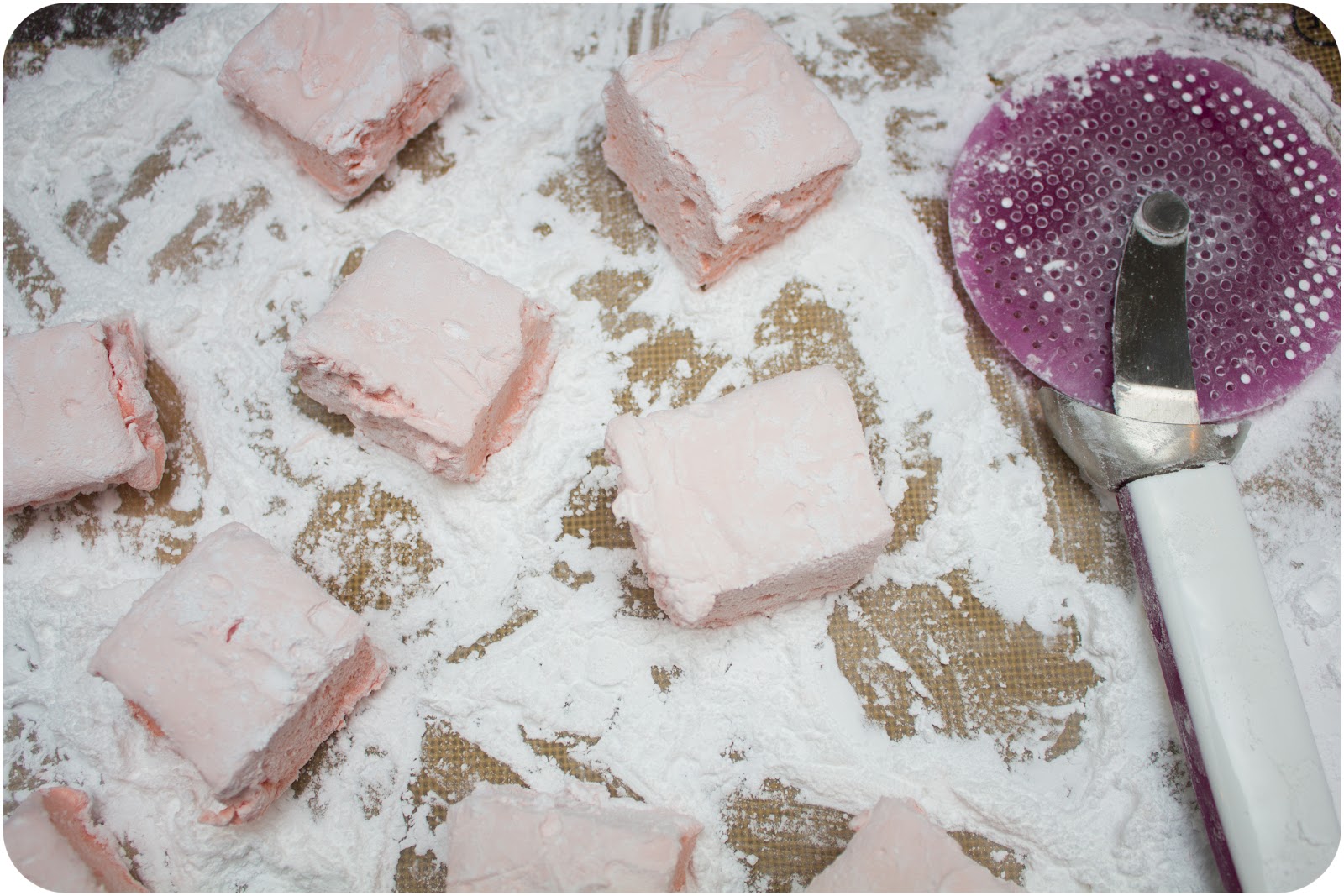 Of course we were heartbroken to leave Vancouver, and I was heartbroken to leave Butter behind! So imagine my excitement when on the morning my baby was born my husband presented me with a push present and it just so happened to be Butter Baked Good's recipe book! He is a keeper that's for sure! It is one of the most beautiful recipe books you will ever own, and I have spent months and months staring at those beautiful pages wondering what to make first!

Naturally, it had to be their marshmallows!

So I tentatively whipped up my first batch...waiting for that liquid sugar to magically turn into white fluff and it didn't! I think it was because I used some gelatin leaf so undeterred I tried again with powdered gelatin this time and did a little happy dance as the marshmallow fluffed up! 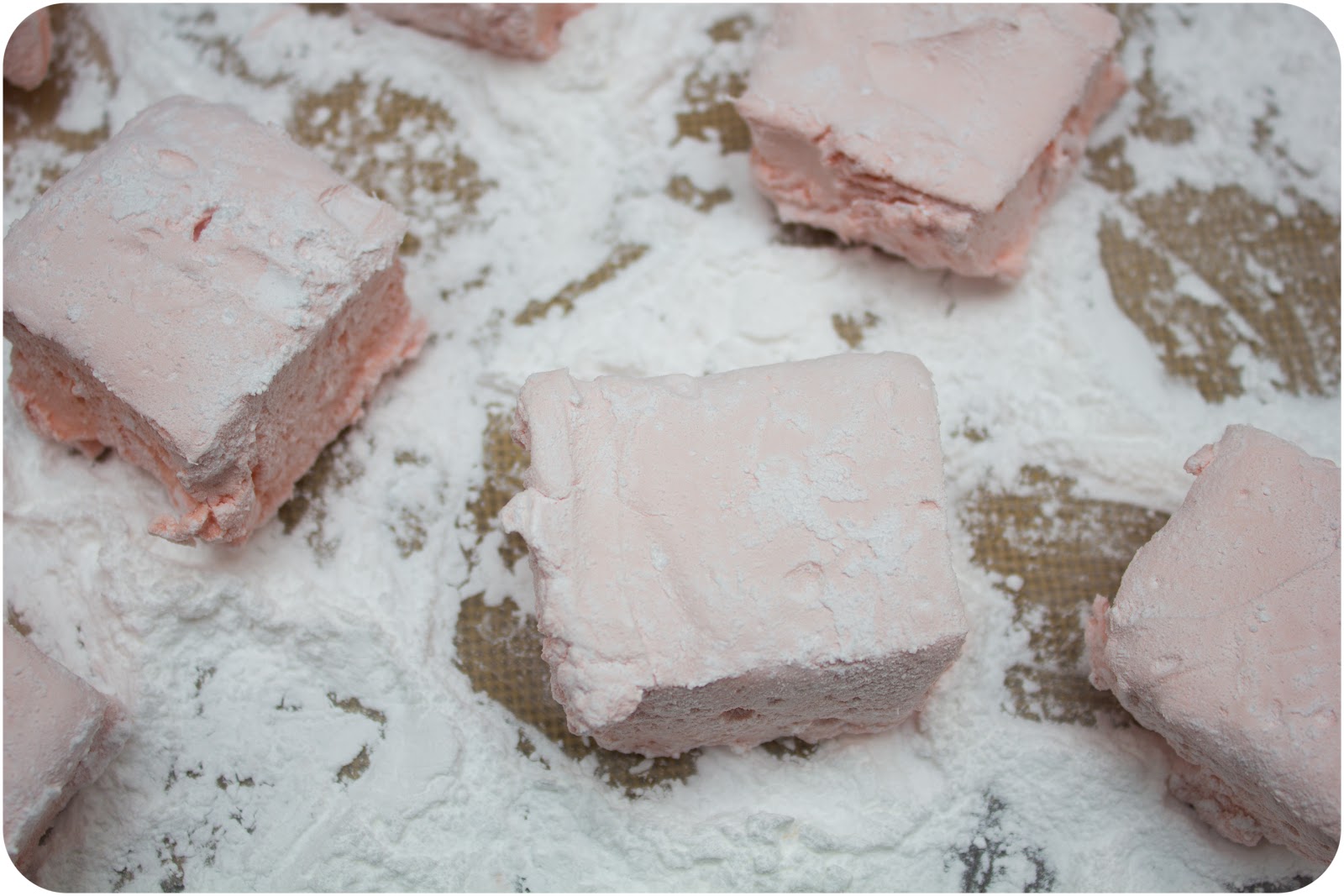 They are actually so much easier than I ever thought they would be to make! and now I've conquered them once I'm already dreaming up all the flavours I'll be making in the future! and the taste, oh the taste! they are soft and pillowy and creamy and delicious and everything you expect from an amazing marshmallow!

They are great in hot chocolates, and melt even better than shop bought marshmallows! 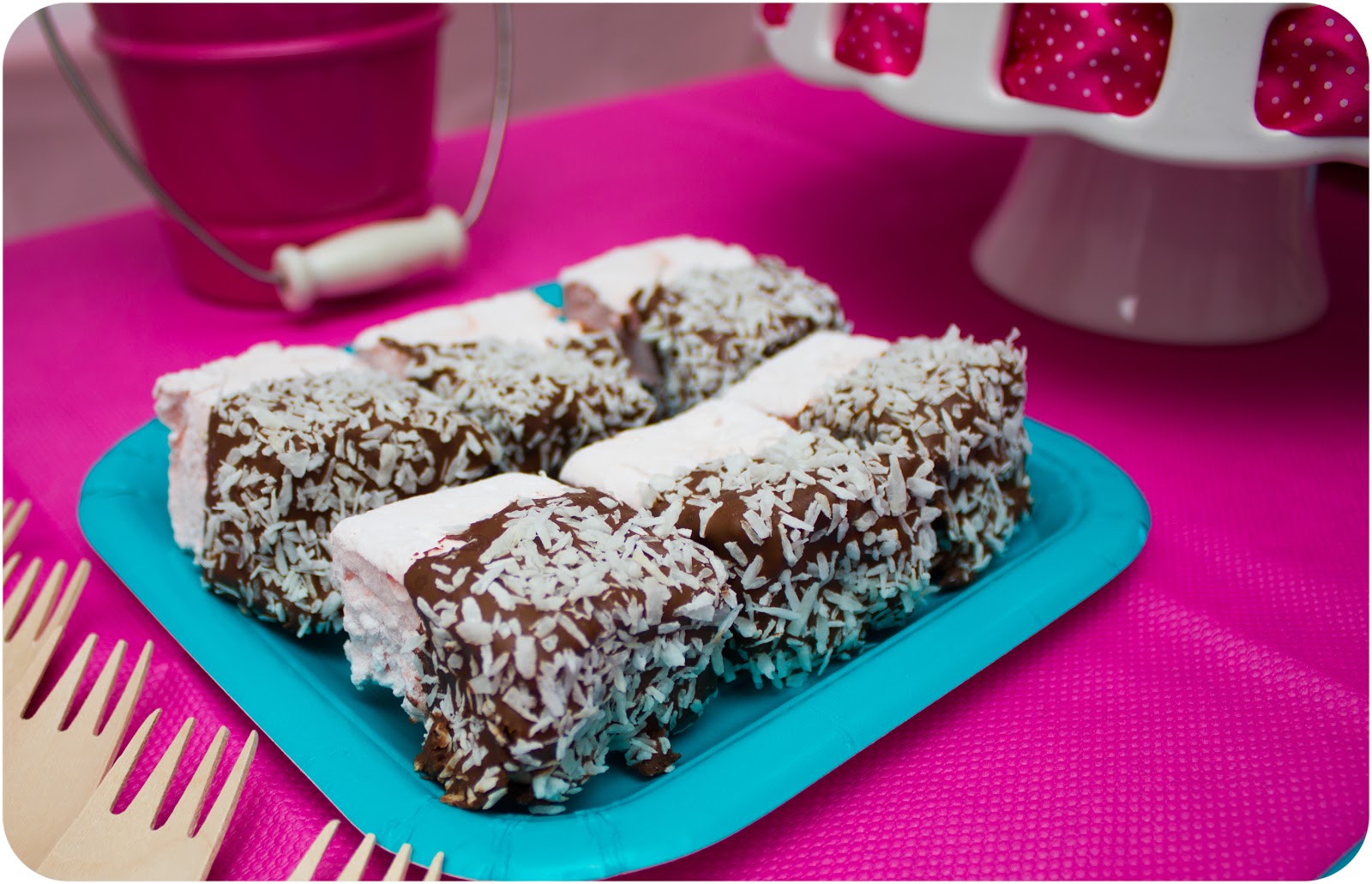 and I also dipped some in chocolate and then in coconut for the dessert table we had for my 1 year old's birthday (which I'll be blogging about soon!) and I threw them in some coconut rocky road which will be appearing on the blog over the next few weeks too!

Butter's Famous Marshmallows - Coconut:
Makes 64 1x1 inch or 32 2x2 inch (which is the size I made in the pictures)
From Butter Baked Goods

Prepare a 9x9 baking pan with a sheet of clingfilm dusted with icing sugar.

In a stand mixer fitted with a whisk attachment pour in 1/2 cup of the water and sprinkle with the gelatin.  Set aside and let the gelatin soak in.

In a medium saucepan, over high heat, add the sugar, syrup, salt and remaining 1/2 cup of water.  Bring to a rolling boil and continue to boil for 1 minute.  Remove from heat.

Turn the mixer to low and mix the gelatin once or twice to combine it with the water.  Slowly add the hot sugar mixture, and continue to mix on low.

Turn the mixer to high and continue to whip for 10-12 minutes until the marshmallow batter almost triples in size and becomes very thick.  Scrape down the sides of the bowl to avoid the batter overflowing as it grows.  Stop the mixer, add the coconut extract, and then whip briefly to combine.

Transfer the mixture to the prepared baking pan and use a spatula to spread it evenly into the pan.  Work quickly because the marshmallow becomes more difficult to work with as it sets.

Grease a sheet of clingfilm with butter and lay it across the top of the marshmallow.  Press down firmly on the clingfilm to seal it smoothly and tightly against the mixture.

Leave the marshmallow, at room temperature, to set for at least 3 hours or overnight.  The marshmallow will be too sticky and soft if you cut it too soon.

Use a large knife to cut the slab into 1x1 inch squares or 2x2 inch squares if you want larger ones like I did.  Roll each of the freshly cut marshmallow squares in the remaining icing sugar to coat them completely.

Store in an airtight container.