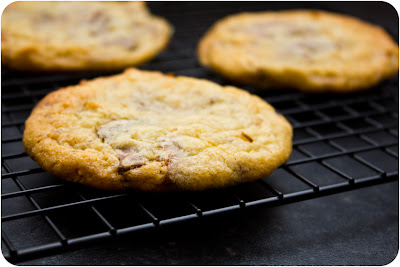 Lately I've been making a lot more cookies than usual, which pleases my husband no end because he's got a pretty big addiction to hot chocolate! 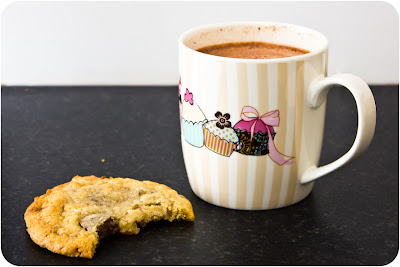 ...and there is nothing he enjoys more than freshly baked cookies to dip into his hot chocolate! So I decided to finally get around to baking this recipe I had pinned way back in November. You should also check out Maggie's whole blog - I finally think I've found someone as obsessed with coconut as I am! and there are some delish sounding recipes on there! 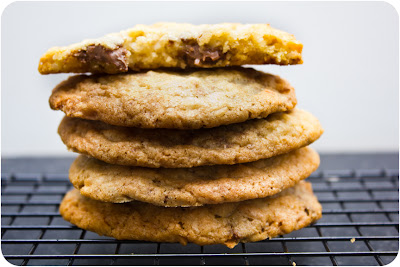 I decided to make my cookies quite large, they spread out nicely and the melting chunks of chocolate added perfect contrast to the texture of the shredded coconut.  If you're a coconut fan - you will love these! They did not last for long in our house.  I know coconut is a bit of a love/hate thing, so if you're not so keen on it you could always switch it out for some nuts or something.

I'm sorry - I feel like this post is lacking in my usual enthusiasm! but I have been in bed with some kind of food poisoning for the past 4 days and as you can imagine writing enthusiastically about food does not come easy when you have a current aversion to it! Fingers crossed I'll be back to my usual self, gorging on cupcakes and brownies, in no time!

Preheat oven to 190 degrees C.
In a stand mixer or large bowl, cream together the butter and both sugars until light and fluffy.
Beat in the egg, then stir in the vanilla.
Combine the flour, bicarbonate of soda and salt; stir into the creamed mixture.
Fold in chocolate chunks and coconut.
Drop by rounded spoonfuls onto baking sheets (for the more rustic look) or roll yours into balls like I did.
Bake for 8-10 minutes in the preheated oven.
Allow cookies to cool on baking sheets for 5 minutes before removing to a wire rack to cool completely.

It's also about time I blogged about the liebster award.  I have been awarded it 3 different times in the past month but have not gotten around to writing about it just yet! Thanks to all who nominated me!
For the observant among you it's normally awarded to blogs who have under 200 followers, and I did for the first two nominations from The Royal Cook and Make a long story short but my followers have increased since then and Kell's Kitchen liked my blog so much she was willing to give me a 10% margin on the rules - thanks Kelly!

Liebster means favourite or dearest in German and as I said it is awarded to up and coming bloggers with followers of under 200.  The blogger awarded gets to share the award with 5 more bloggers of their choice and link back to the blogger who awarded them.

So I'm excited to share with you my 5 fave blogs of the moment that are definitely worth checking out...

First up is Daisy over at Nevertoosweet - I think you can tell from the title of her blog that we are kindred lovers of all things sweet! She lives in Hong Kong so blogs about some very interesting delicacies that she finds at bakeries/restaurants over there, and she has even just started her own cupcake hunt trying to find the best cupcakes HK has to offer! She also was lucky enough to go to NYC recently, a city ever so close to my foodie heart! and she was kind enough to flood her blog with pictures of Shake Shack, Serendipity 3, Dylan's and Crumbs (all personal faves of mine!) - it was enough for any NYC lover to get their fix!

Second, is Kate from What Kate Baked - not only does she bake up countless delicious treats, but her blog posts are always very witty and an enjoyable read! She whips up all kind of interesting cupcake flavours such as Ferrero Rocher, Jaffa Cake and even Custard Cream flavour!

Next up is Rebecca who blogs at I wanna Be A Domestic Goddess.  I'm sure she probably has way more than 200 followers but as she doesn't have the gadget I'm including her in my list! She is super crafty - in the scrapbooking/homemaking kind of way and an awesome baker and she also lives in DC (Sooo lucky!) She spent a whole year baking different whoopie pies each week, and she also annually dedicates a whole week worth of blog posts to baking cupcakes with amazing flavours like root beer float, hot fudge sundae and even 'shamrock shake' (minty milkshakes McD's used to make back in the day apparently!) Rebecca even spent 4 days in London where she did what any great cupcake lover would do and set out on a cupcake hunt, and I'm happy to say in those 4 days she covered nearly as many cupcakeries as I've covered in the last 5 years - now that to me is seriously impressive!!

Of course I'm going to give a shout out to my sister Mel over at Let's get scrappy - she features lots of her awesome scrapbooking layouts which include homemade bunting, lace borders and awesome sparkly lettering. She also bakes lots of cupcakes too (I guess it runs in the family!) and she just had to be apart from her husband for a week whilst he went home to Belgium so she whipped up a very sweet Valentine's snack bar to welcome him home which she has also blogged about.

and finally, Kat from Life of a Cupcake Baker - as you would expect she bakes a whole lot of cupcakes which I love! She's only had her little baking blog up and running for 8 months but in that time she has tackled (and mastered!) perfect frosting swirls, fondant characters, perfectly coated cake truffles and she always sticks to interesting flavour combos too! I am constantly impressed.

Hopefully all of you who have been nominated will pass it on to your favourite 5 up and coming bloggers too to keep the liebster love going!
Posted by Cupcake Crazy Gem at 20:25