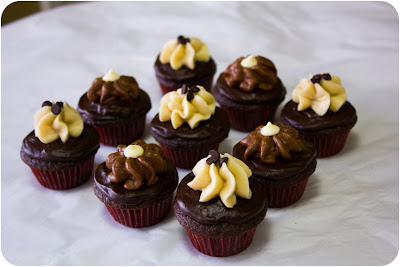 It's been a while since cupcakes graced the blog...and without cupcakes this blog just leaves me as crazy Gem! so that needed to be rectified! 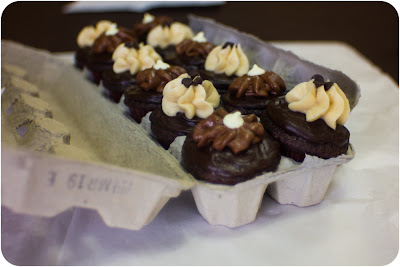 One of my favourite things about our time in Canada has been the kindness and friendliness of the people here! From the very first day we arrived, and we had no change for the bus but the driver let us on anyway to people lending you cars! Yes, that's right! The colleague I work with went to Mexico during spring break and knew that we don't have a car here so he offered to lend us his so that we wouldn't have to hire a car everytime we wanted to go somewhere! How kind is that! So thanks to him we were able to have crazy amounts of fun that you can check out here and here. 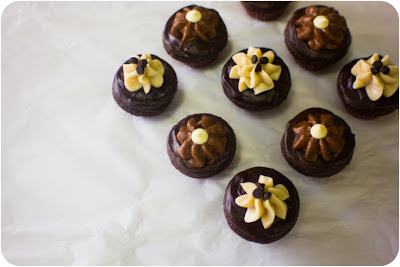 I knew that I wanted to bake something for him to show my appreciation and since I can't think of a tastier treat than cupcakes, I baked up some of my favourite chocolate buttermilk cupcakes and topped them with a generous amount of ganache and then finished them off with two frostings: vanilla bean and chocolate malt.  Can we just talk for a minute about how amazing ganache is? It's something I make very rarely...but I had so much fun making it that I can see it is going to pop up more frequently in the future! It is just SO versatile! and what's not to love about a giant bowl of thick fudgy chocolate blended with cream! I'm a convert that's for sure! and it took these cupcakes from being yummy little bite sized treats to being over the top indulgently delicious chocolate bombs!

Make them for people...and I guarantee their kindness will keep coming! Like tonight I just got home from that same colleague's house where he helped me fill out my first Canadian tax return, and he is lending us his car again next week when my mom and sister come to visit!!

I better start whipping him up another batch! 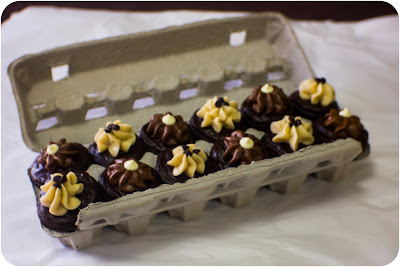 Preheat oven to 180 degrees C/350 degrees F.
In a mixing bowl, whisk together flour, cocoa powder and bicarbonate of soda.  Set aside.

Fill cupcake cases 2/3 full.  Bake in a preheated oven for 12-15 minutes, until a knife inserted into the middle of each cupcake comes out clean.  Allow to cool for 5 minutes in baking pan until transferring to a wire rack to cool completely.

Chocolate Ganche:
Makes enough to frost the above, with plenty to spare...and you can eat the rest with a spoon! I did!
From Tracey's Culinary Adventures

Place the chopped chocolate in a medium heatproof bowl.
Combine the cream, sugar and corn syrup in a small saucepan and bring to a boil.  Immediately pour the cream mixture over the chocolate and let it stand for 1 minute.
Whisk until the mixture is smooth and blended, then add the butter 1 tablespoon at a time, whisking until completely incorporated.  Let the mixture stand at room temperature to thicken before topping the cupcakes.
Once cool, using a palette knife spread a generous amount of ganache on top of each cupcake.

Mix together the sugar and butter until they are blended and creamy.  Add vanilla bean paste and milk and continue to beat for another minute.  If desired, add more vanilla bean paste to taste, or more icing sugar if you require a stiffer consistency.

In a bowl of a stand mixer fitted with a paddle attachment, combine half the icing sugar and butter and beat on low speed for one minute.  While that is mixing, melt the chocolate in a heatproof bowl over a pan of simmering water, and set aside to cool. Add the rest of the icing sugar and butter to the stand mixer and mix on medium speed until completely combined (I do it in two stages so as not to completely cover my kitchen in icing sugar).
Add vanilla and Ovaltine, and beat on low speed until well combined.
Add the melted, cooled chocolate and beat on medium speed until smooth (about 2 minutes). Add double cream and beat on high speed for one minute.

Eat and enjoy, or share with friends and sit back and watch the kindness emerge!

I'm also sending these over to What Kate Baked and Lavender and Lovage for their Tea Time Treats blogging challenge because the theme for April is Fairy Cakes, Cupcakes and Muffins.